Çiya Kebap was established in 1987 in Kadýköy as a modest restaurant of kebap, lahmacun and pide. The founder of Çiya, Musa Daðdeviren, was born in 1960, in Nizip, Gaziantep/Turkey. He started his professional life as a specialist on baking. Between 1987 and 1998 he worked as a cook himself with some precious kebap and lahmacun chefs. Baking was a profession inherited from his mother's family, too. His grandfather Kurt Ali the breadmaker, was a very respected baker considered a master at his job. His maternal uncles Ammi Mýndýk, Recep Açýkgöz, Aða Ýsmet, Saðýr Nazif, Ali Açýkgöz are among the well-known cooks of the region. When Musa Daðdeviren decided to establish his own business in 1987, he wasn't thinking about just a place where kebap, lahmacun and pide were served. What he had in mind was to create an experimental cuisine of the Anatolian food culture which was losing power against fast food. However, the road was long and difficult to go. While going down this road where he started with little savings but high hopes, despite all the economic problems and degeneration he was faced with, he never gave up his principles of high quality and enjoying what he did. He believes in the life motto that "the respect you have for your job is a sign of the respect you have for yourself." Since the first day, Çiya has always positioned itself away from the idea of making easy money by serving kebap in a way it shouldnt be done. With the existing knowledge and additional researches and with enthusiasm a rich menu of kebap was formed. In general the types of kebap known, together with the seasonal ones, is totally around 40. In Çiya this number went up to 100 after these long researches. As a result of this philosophy, Çiya began to be perceived as a place to discover new tastes by its guests. Apart from kebap and lahmacun, different regional dishes began to be served, although very rarely at the start. As people showed more interest in those dishes, more of them were added to the menu and Musa Daðdeviren kept on testing new recipes all the time. Actually, those tests were emerging out of his uncontrollable interest and enthusiasm in cooking, culture and history of food. After the big success of these testings, a new and different restaurant was on its way to be founded. In 1998, 11 years after the establishment of Çiya, a new restaurant called Çiya Sofrasý was opened in the same street. The new place began serving traditional Anatolian dishes which were about to be forgotton even in their original regions. Çiya Sofrasý introduced a "cuisine of culture" where long lost recipes and old cultures were brought to our time. Even though Çiya Sofrasý defines itself as a restaurant of "Southeastern and East Mediterranean Cuisine", it is actually a reflection of a vast geography from Anatolia to Mesopotamia and the variety of culturally prosperous people that have existed on that land. Here, all the Azerbaijani, Georgian, Turkish, Arabian, Armenian, Ottoman, Syrian, Seldjukian and Jewish dishes are prepared according to the original customs and believes. In October 2001, three years after the opening of Çiya Sofrasý, in order to create a more comfortable and pleasing atmosphere for the guests Çiya Kebap II was opened with the experience gained from the former restaurant. Çiya is currently at the service of its guests in all these three restaurants in the same street which are 20 metres away from each other. 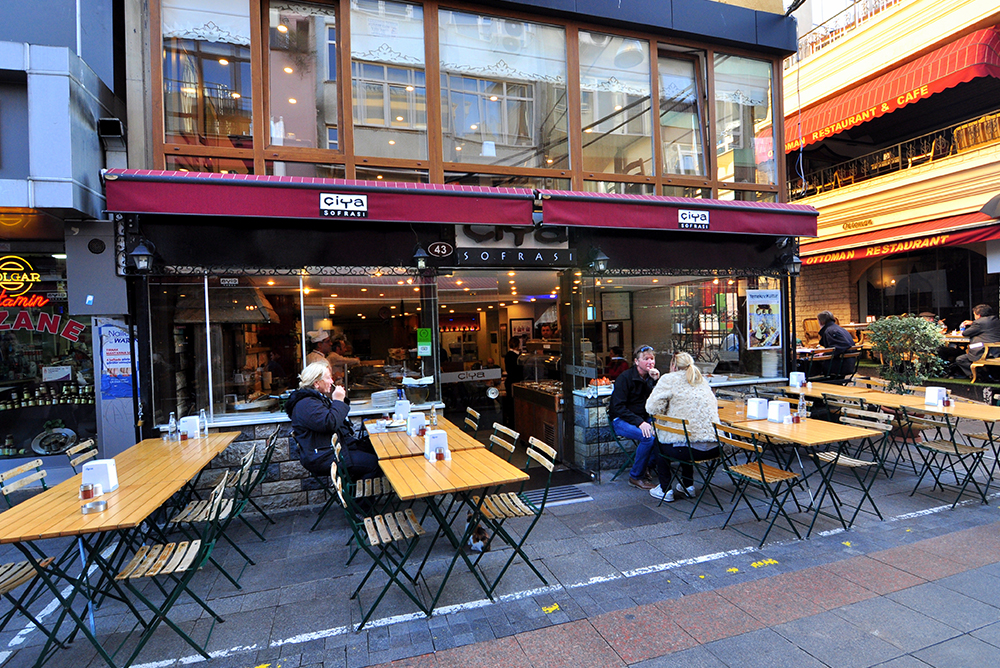