A “bohemia” with its cafes, where debates take place about theater, cinema, literature, and philosophy. this is cihangir.

A district where caricaturists, painters and actors live in Istanbul, A “bohemia” with its cafes, where debates take place about theater, cinema, literature, and philosophy. This is Cihangir.

A warm August morning…we are in Cihangir. One of the loveliest districts of Istanbul has already opened its eyes to morning. The streets are vibrant, but you don’t see grumpy people hurrying in a rush and running around trying to reach a place. It looks as if this place is not a five minute walk to Taksim. It is more like an Aegean village lying by the seashore. It is so calm, peaceful and comfortable. It is as though everybody is here for their vacation. Looking around, there is a couple sitting in the small café just across the road. It is obvious that they are foreigners. Thanks to the tables placed on the pavement, if you forget for a moment that you are in Istanbul, it is possible to feel like you’re in Paris. (Would you like to make a personal comparison? Paris is a flight away ???? 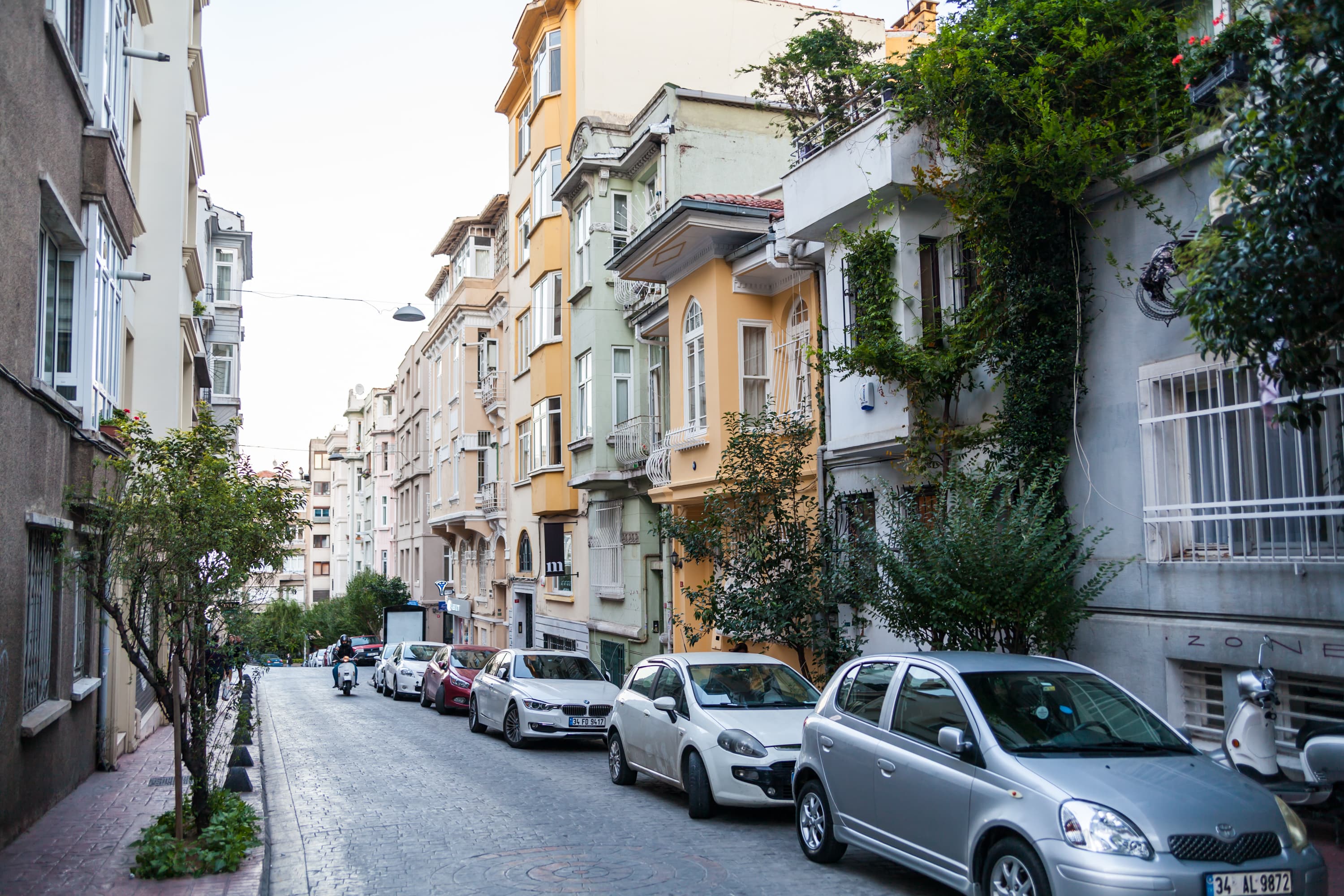 The District Is Bigger Than Itself

One of the best breakfast places of Istanbul is Cihangir. After enjoying our breakfast here, we decide to go to the mukhtar of the district to find information on the district and to ask where we should go and which places we should see. We ask one of the shopkeepers: “Hi! We are looking for the mukhtar…” Guess what the answer was! “Which one?” While we think that every district has one mukhtar, to our surprise Cihangir has four. As we were trying to figure out the reasons for this extraordinary situation, we found out: The district we are calling Cihangir is actually not quite Cihangir. Let me enlighten you. There is a Cihangir district ancillary to the borough Beyoğlu, but if you add the Kılıç Ali Paşa district that includes the houses facing the sea, the Firuzağa district where the “Firuzağa Mosque” is located -if you need a breather, you can sit and relax at the coffee house in front of the mosque, under the shade of trees by the way- and the Pürtelaş district, which we call the Cihangir district. We consider that we just can’t find it like that; we head for the closest mukhtar, the mukhtar of Cihangir, Sündüs Ulaman. Miss Sündüs answers our questions in a pleasant and charming manner. And with the info we received from her, we start touring Cihangir. We go uphill, we go downhill, we stop by the famous stairs of Cihangir. We pass by the streets surrounded by low (at most with 5 floors) buildings, which don’t oppress you. We pet the cats that sleep on top of the cars parked on the shadows of the little trees by the streets, inside the fences by the road, almost everywhere…

There is a reality about Cihangir which we just have to mention. Cats! Cihangir is like a heaven for them. In all colors and all ages, they are everywhere in Cihangir. They sleep anywhere they like, and as you know, there is no other creature on earth that sleeps that much. To be honest, you feel like becoming a cat, as you see so many cats sleeping carelessly on a cornerstone on the stairs, underneath the trees. Especially when we were just about to take a picture of a cat, an old lady came out of nowhere, giving the cat a handful of dry feed, by saying “Mama has come, mama has come.” You climb these stairs slowly. The long stairs of Cihangir are one of the most famous features of Cihangir. You run into them just about at every corner. It is as though Ahmet Haşim wrote his famous “Stairs” poem about these stairs. With its beautiful view, the stairs of Cihangir remind you of another poet, Orhan Veli. He once said; “Towards Gemlik, you will see the sea. Don’t be surprised.” You shouldn’t also be surprised when you see the beautiful view of the Bosphours, Üsküdar, the Maiden’s Tower, when you climb the stairs.

Cihangir is a small neighborhood with its grocers, greengrocers, cafés, book stores, taxi drivers, plumbers and cats. It is the kind of a neighborhood where we used to play ball and run on its streets, our mothers calling our names from the windows and slip a piece of bread, cheese, apple, or tomato in our hands, and when it gets late, calling us home by saying “Come home, it is too late.”On the other hand, it is a “bohemian” zone where the painters, caricaturists, actors, writers, journalists, foreigners and minorities live. A “Bohemia”, where cinema, theater, literature, philosophy are discussed at countless corners, banquettes, alleys, cafes along the road and bistros. In late 19th century, Levantines used to live here, just like in Pera. In the 1920s and 1930s, Cihangir only consisted of two districts. In the 1940s and 50s, the people that were working at entertainment spots in Beyoğlu began to live in Cihangir. This led to the construction of luxurious buildings and the district became a settlement for well-endowed people. After the second half of the 90s, with the support of the public bodies and the efforts of the non-governmental organizations, the district gained its recent identity. The derelict houses of the district were reconstructed. When this chain of events merged with the beautiful scenery of the district, the rents began to rise and this had changed the identity of the residents. With the changing of the residents, Cihangir evolved slowly into a city apart from the city, a subculture which creates its own culture.One side of it maintained its small, cozy spirit, and the other side combined the bohemian aura brought by its residents and the traditional spirit of the district. This was so successfully done that neither the spirit of the district was damaged, nor the bohemian aura lost its taste. As in the Tünel district, people complain about these developments; about popularization of the district, rising rents, the traditional fabric being damaged; however, we should note that most of them are happy about this. Finding such “special” places that create their own culture is difficult. So, the best thing to do is to enjoy Cihangir, isn’t it?

There are many cafes to go for chat, while you have a drink and eat and relax. The most popular of them are Susam, Kahvedan, Meyra (former Leyla), and Smyrna. For fish, you can drop in at Doğa Balık, and to embrace the sea you may go down to the shore through the stairs to Fındıklı.

Why Is Cihangir, Cihangir?

The lexical meaning of the word “Cihangir” is “The person that captured the major part of the world”; however, it is weird that such an ambitious word is the name of this mild district. To find out the fact, we need to go back to the past, to Suleiman the Magnificent. Suleyman the Magnificent had a son from Hürrem Sultan, named Cihangir. For the memory of his son, who died young, Suleyman had a mosque constructed in this place that looked like a large rock protruding from the sea. The mosque that was constructed by Mimar Sinan between the years 1559 – 1560 and was named Şehzade Cihangir Mosque. This is how the district began to be called Cihangir.

Reviews
€45.00 / Per Person
Skip the Line Recommended
Istanbul Tourist Pass: 85+ Attractions & Services
All of your sightseeing plans, sorted! The Pass will let you skip ticket lines, save you money and guide you around all the best attractions in the city!