Besiktas Vodafone Park, which was first constructed in 1947, was replaced by Vodafone Park Stadium. the stadium was opened on November 3rd, 1947, by Ismet Inonu, the president of turkey at the time and a supporter of beşiktaş. the nönü stadium's initial seating capacity was 16,000 people. it was christened the mithat paşa stadium in 1952, however, this was later changed in 1973. it's also important to note that the stadium was given legal protection

Vodafone Arena Stadium was built in place of BJK İnönü Stadium, which was originally built way back in 1947. In 3rd of November, 1947, Turkey’s then-president İsmet İnönü inaugurated the stadium, who was also a Beşiktaş fan. The initial viewer capacity of the İnönü Stadium was 16,000 people. In 1952, it was renamed as the Mithat Paşa Stadium, though this was reversed later in 1973. It is also worth mentioning that because of the unique location of the stadium, it had a legal status as a "historic monument", which is protected by the Turkish High Council of Monuments. This is one of the reasons why the renewal project was postponed several times from 2004 to 2013.
Of course, a stadium that was built in 1947 didn’t withstand the test of time that well and had to be rebuilt. In 2004, first tries were made to get the necessary permissions for the arena’s renewal, but these were delayed several times and the renewal project had to start later in 2013. The old İnönü Stadium was taken down and the new Vodafone Arena Istanbul was built over it. Vodafone became the name sponsor of Beşiktaş for 15 seasons and buried the letters of the fans to the arena’s foundation as a love message.
In 2016, the construction of the new arena was finished. In 10th of April, it was inaugurated and the first match at the Vodafone Arena was played the day after between Beşiktaş and Bursaspor. Beşiktaş won this match 3-2. The 2019 UEFA Super Cup final was played in Vodafone Park in 14th of August, 2019. Liverpool won the game 5-4 during penalties. 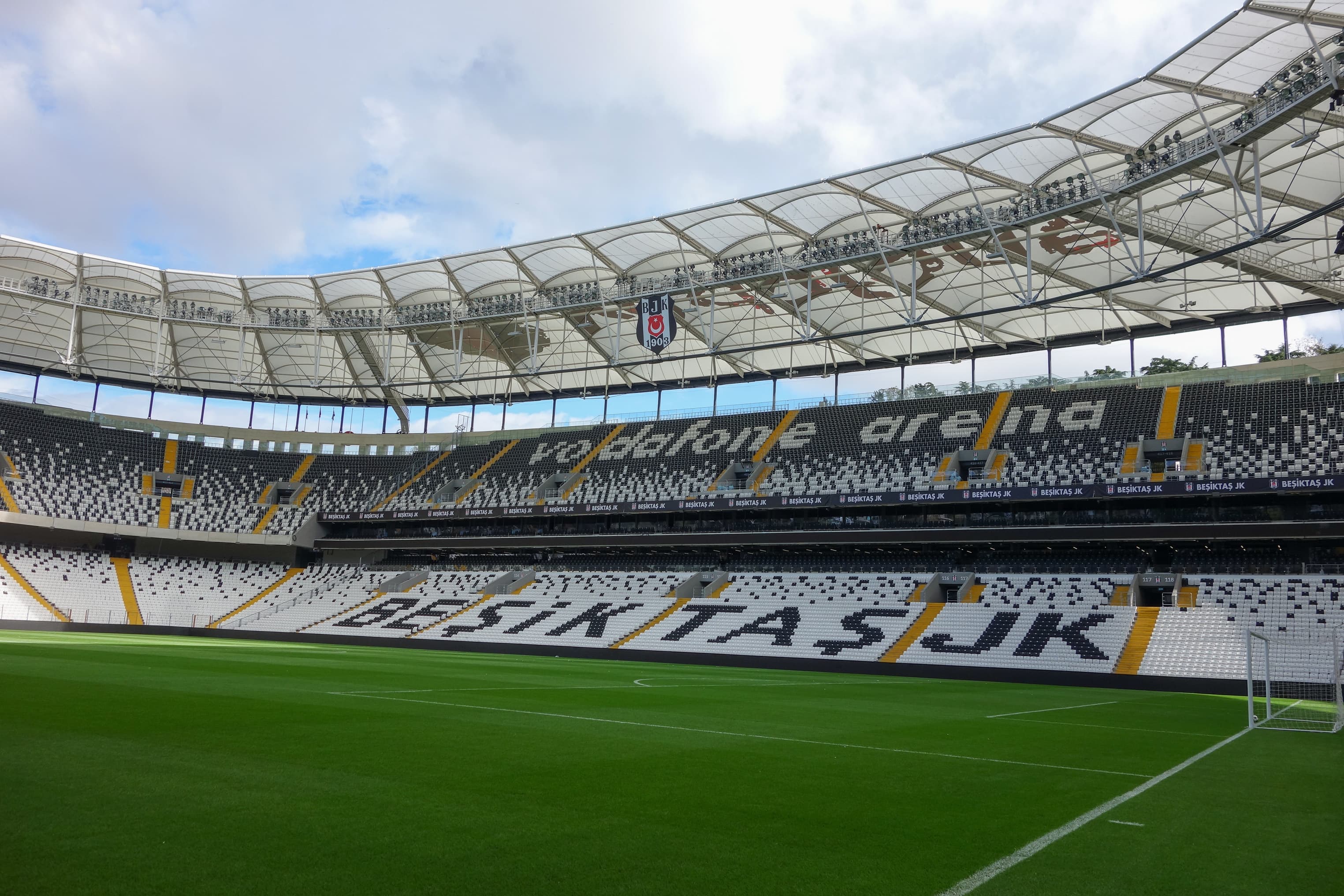 Vodafone Arena cost around $110 million dollars, and it has the technical prowess to back that up. Vodafone Arena capacity is 41.903 viewers. There are 147 suites and 1847 suite seats, 350 VIP parking areas, 2100 VIP seats, 600 standard parking areas, 81 handicap seats and 81 companion seats, an underfloor heating system, an SISAIR Underfloor Ventilation and Vacuum Drainage System, a roof and a C90 field of view.
Beşiktaş states that Vodafone Park is designed to have multiple purposes. It is planned that the stadium will host numerous concerts and other events in the future.
According to the Vodafone Arena Istanbul Seating Plan, there are 30 blocks on the upper floor of the tribune in addition to a press tribune. On the lower floor, there are 24 standard blocks and a VIP block. 25 different doors lead to different blocks of the tribunes. There isn’t any way of knowing the answer to the question “How is the Vodafone Arena view from my seat” without actually trying it, but you do not have to worry about the person in front of you blocking your view thanks to the stadium’s C90 field of view design. As for the best tribunes, blocks between 403 and 428 and 413-418 on the upper floor and the blocks between 113-118 and 103-124 provide the best angles to watch the game. If you want to see the tribunes and decide for yourself, search for a Vodafone Arena Seating Map and choose one.
In addition to its football field and tribunes, Vodafone Park also houses Beşiktaş JK Museum, a Beşiktaş Shop and a Vodafone Mobile Center.

Where is the Vodafone Arena

Vodafone Arena Istanbul Turkey is located in the Beşiktaş district, which is a favorite among a lot of Istanbulites. It is in the Dolmabahçe Street near the Dolmabahçe Palace, and is rather close to Taksim Square and Galata Tower. There are many ways you can go to Vodafone Arena:

Accessing the Vodafone Arena
The Vodafone Arena is situated on the banks of the Bosphorus near to Dolmabahçe Palace, a little to the northeast of the city center of Istanbul. It is located around 2.5 kilometers from the Galata Bridge and 1 kilometer from Taksim Square, from where the stadium can be reached on foot in 15 minutes.

Football is without a doubt the most well-known sport in turkey. whether they enjoy the sport or not, almost everyone in the nation is a fan of one football team. there are many different football teams

Besiktas Vodafone Park, which was first constructed in 1947, was replaced by Vodafone Park Stadium. the stadium was opened on November 3rd, 1947, by Ismet Inonu, the president of turkey at the time and a supporter of beşiktaş. the nönü stadium's initial seating capacity was 16,000 people. it was christened the mithat paşa stadium in 1952, however, this was later changed in 1973. it's also important to note that the stadium was given legal protection