Cruise on Bosphorus with City Tour

Choose a morning or afternoon tour with us to cruise the stunning Bosphorus, see many important landmarks and tour the Golden Horn....

In the Besiktas district, Istanbul, one of the most fascinating palace examples of the late Ottoman period still stands strong: Ciragan Palace. Today, it serves as a 5-star hotel under Kempinski, but it still very much is a visual feast and holds its cultural and historical value. If you ever visit Istanbul, do not leave without witnessing this exemplary palace that has become a symbol of the city. 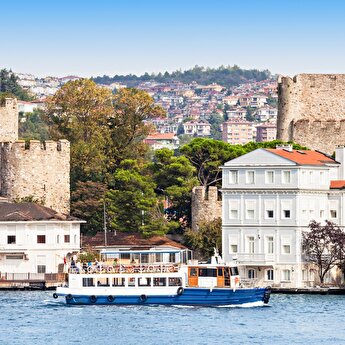 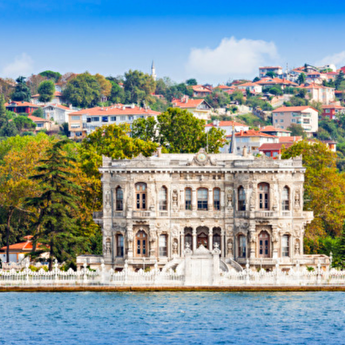 Before the palace was built, the area was known as “Kazancioglu Gardens” in the 17th century. During the Tulip Period, these seafront palaces and gardens filled with flowers were significant symbols of the period.
III. Ahmed, the sultan of the Tulip Period, gifted this garden between Besiktas and Ortakoy to his grand vizier Damat Ibrahim Pasha, and Damat Ibrahim Pasha built the first version of the Ciragan Palace as a smaller mansion for his wife Fatma Sultan. Ciragan Palace gets its name from the general name of the night festivities that happened in the area of the palace during the Tulip Period (1718 – 1730), which were also organized by Damat Ibrahim Pasha. These night festivities involved oil lamps, candles and torches, which also explains why they were called “Ciragan” which means “light” in Persian.
During the reign of Sultan I. Mahmud (1730-1754) and III. Selim (1789-1807), the palace underwent many repairs, changes and had many additions. Sultan II. Mahmud wanted to restore and renew this area completely, so he took down the mansion Damat Ibrahim Pasha built along with a school and a mosque near it in 1834, and built a new palace.
When Sultan Abdulmecid came to the throne, he also took down the Ciragan Palace that Sultan II. Mahmud built in 1857. Unfortunately, because of financial difficulties, the construction slowed down and he died in 1863 before he was able to see the completion of the palace.
It was during Sultan Abdulaziz’s reign that the palace was finally completed in 1871. It was designed by the Armenian architect Nigogayos Balyan and built by his two sons, Hagop and Sarkis Balyan, and their contractor partner Kirkor Narsisyan. The construction lasted between 1863 and 1867. The materials used in the 750-meter long palace along the seaside were extremely rare and high-value. These rare materials like porphyry, marble and mother-of-pearl were bought from all over the world just for the construction of the Ciragan Palace. However, Sultan Abdulaziz did not get the chance to live in this magnificent palace for long. He was deposed by his ministers on 30 May 1876 and found dead in the palace just 3 days later, reportedly from suicide.
After Sultan Abdulaziz, V. Murad came to the throne and moved into the Ciragan Palace, but he was deposed 93 days after he inherited the throne by his brother II. Abdulhamid because of alleged mental sickness.
In 1909, the Ciragan Palace started being used as the First Parliament building, and II. Abdulhamid brought his Rembrandt and Aynazovski art collections. Just 2 months after this decision was taken, a big fire broke out in the Ciragan Palace and a big majority of the wooden inner parts were burned along with the art collections of II. Abdulhamid, but the palace’s stone outer parts remained intact.
The palace’s garden became Besiktas’ stadium in 1930 under the name of Seref Stadium.
The Ciragan Palace was transferred to Istanbul Municipality in 1946. In 1986, it was rented to foreign investors for 49 years and transformed into a 5-star hotel in 1990. In 2006, it went under another small restoration and opened its doors back under the name “Ciragan Palace Kempinski”.

Inside the Ciragan Palace

Today, Ciragan Palace Hotel Istanbul is one of the most luxurious hotels in the entire country. It regularly hosts press conferences, big weddings, high profile meetings and congresses. The palace houses 310 rooms, including 20 suites in the main hotel section and 11 suites in the imperial palace section, the most distinguished part of the hotel. It is the only hotel accessible by car, yacht and helicopter in Istanbul.
Ciragan Palace Istanbul wedding is one of the most famous events of the hotel. These weddings are fit for fairy tales, accompanied by palace’s elite orchestra, top-class dishes, the romantic wedding terrace and an amazing Bosphorus scenery that makes you feel like you are on a Bosphorus cruise.
Ciragan Palace Sultan Suite, the hotel’s most luxurious room, costs $35,000 per night. It regularly ranks among the top suites in the world, and was ranked #9 in Forbes’ “World’s Most Luxurious Hotel Suites” list in 2016.
To experience dishes that combine international and local tastes, you can eat dinner in one of the many top-class restaurants of the palace. From 3 PM to 5 PM every day, you can grab a Ciragan Palace afternoon tea in the Gazebo Lounge, and enjoy this Istanbul classic accompanied by an unparalleled Ciragan Palace Bosphorus scenery and live music.
Should you wish to experience a Turkish classic, Ciragan Palace hammam is one of the best Turkish baths in the city. You can either get a Pasha or a Sehrazat Treatment, both of which will revitalize your body and make you feel like a new-born again.
Among other top-class services of the Ciragan Palace are Istanbul airport transfer services, helicopter tours, timeless check-ins and check-outs, butler services, high-speed internet, business, spa and fitness centers, exclusive Istanbul tours and one of the favorites of the customers, the Infinity Pool.

Where is Ciragan Sarayı?

Ciragan Sarayı is in the Besiktas district, in the Ciragan Street, though it is more appropriate to say that it is right between Besiktas and Ortakoy. There aren’t any metro lines that can directly take you to the palace, but there are many IETT buses that stop by. DT1 is the most common line that has a Ciragan stop. You can get on a DT1 bus from a couple of M2 Yenikapi – Haciosman stops, like Gayrettepe, Taksim, Levent and Nispetiye. You can directly use DT1 to reach the palace if you are close to one of these locations or use M2 Yenikapi – Haciosman metro line to go to one of these stops in order to transter to DT1.
From Eminonu, you can take the T1 Kabatas – Bagcilar tramway to the Findikli stop. From there, you can take one of 30D, 25E or 22 buses directly to the palace.
Thanks to its convenient location, the palace is also close to many cultural and historical places in Istanbul like the Yildiz Palace, Ataturk Museum and Harbiye Military Museum.

We were staying in a far hotel to city center. Needed to come on our own to pier. Will be better if they put transfer service to all hotels. Foods and drinks were good. We got unlimited local alcoholic drink upgrade with a small supplement.

It was amazing experience onboard. Enjoyed a lot!

Our guide was so kind when they arrive to our hotel. Due our ages we could not move speed. Coach was so cold. Years years ago i was here. I have visited Spice Market. Changed so much. But the Bosphorus gave us a few years more to live.

Enjoying the view after sun goes down was awesome. Also, we read the story about tower s history. It was vey impressive. Highly recommended!

Inspite of the duration was circa 3 hours, i thought i was just a few minutes. Really enjoyable. Especially Metal Church was so good. It was like a film set.

If it is your first visit of Istambul you shoul make a Bosphorus Tour. To see closely the blueness. And you should smell Egyptian Bazaar.

One day before while i was visiting the kitchen of Topkapı Palace i wondered the dinners of Sultans. Tonight i saw it.

I visited Istanbul 2 years before and joined a Turkish Night in a restaurant. But this one was different. Under the sky, under the stars, delicious foods and dance shows. It was amazing. Did not want to back to hotel.

It’s a great place for a 360-degree view of Istanbul. You can seat and drink a cafe looking at the view. It is a nice place to see.

What an enjoyable evening. Local entertainment was great but so was watching guests from various countries hit the dance floor. The food was plentiful and delicious. They pick you up and take you back to your hotel.