This impressive museum is located in the so-called district of Üsküdar on the Asian side. Beylerbeyi Palace opening hours and closing schedules allow its visitors to explore all the details of the structure with full appreciation. Beylerbeyi Palace hours are similar to those of other museums except an earlier closing time. It opens at 09:30 in the morning and closes at 16:00 in the afternoon. On Monday, the palace is closed for tours and visits.

There is an entrance fee for the palace with several variations for students, adults and half-price age groups. Beylerbeyi entrance fee is not higher than other well-known museums in Istanbul so that it lets everybody discover the delicacy of artistic decoration and the imperial soul of the venue.

It is possible to arrange Beylerbeyi Palace tour separately during these hours or in a combined program including other tourist attractions around. One of the choices is to take Bosphorus Cruise and Istanbul Sightseeing tour during which you can see the magnificent architecture lacing the European side with Dolmabahçe and Çırağan Palaces while spotting Beylerbeyi Palace and manor houses called ¨yali¨ on the Asian side.

Beylerbeyi Palace history dates back to the first decades of the 19th century when Sultan Mahmud II gave the order to build up this originally wooden palace. Unfortunately, the earlier palace was destroyed by a fire and Sultan Abdulaziz commissioned to rebuild it in the same location. It is known that the construction went on between 1861 and 1865 for four years.

Beylerbeyi Palace was built to host the royals as a summer palace while becoming a guest residence for visiting heads of states. Duke and Duchess of Windsor, Empress Eugenie of France were just two of those highly reputed guests of Beylerbeyi Palace in the late 1800s. This imperial summer house also accommodated Sultan Abdulhamid II for 6 years till his death.

Beylerbeyi Museum receives its name from the Turkish word meaning ¨Lord of the Lords¨ referring to the governing body of Istanbul. This powerful meaning is reflected in Beylerbeyi Palace interior design and its architecture. The palace shares a traditional Ottoman house plan with the glimpses of French neo-liberal style. The long side of the rectangular plan captures the unique view of the Bosphorus on its windows and the garden.

The palace is situated on 2500 m2 area including the residence and its beautiful garden. Beylerbeyi Palace Museum is renowned for its wide variety of flora and trees. What is specific here is that Beylerbeyi Palace garden reflects the fresh and soothing climate with those trees and two small tea kiosks. Beylerbeyi Palace historic tunnel behind the building unites two pavilions of Yellow Kiosk by the pool on the upper terrace and the Marble Kiosk with its interior fountain. These two water sources also display an abundance of fertility and Ottoman wealth.

Beylerbeyi Palace Museum is worth to see with the garden and the memories of historical figures resided there. It also reflects stylistic features of the Ottoman architecture lacing the Bosphorus. Thus, an alternative way to explore the destination is to attend the Bosphorus Strait Boat Tour with Beylerbeyi by which you can capture the past via the impressive history of Beylerbeyi Palace and the Maiden’s Tower.

It is easy to find the route for how to go to Beylerbeyi Palace as there is public transport from Üsküdar and Kadıköy. You can also check the walking route and the bus schedules easily on your Turkish Pocket Wifi and Istanbul map service delivered by istanbul.com, which makes free and safe internet available for you while giving background information about your tour, as well.

Beylerbeyi, located in Anatolian/ Asian Side, has been one of Istanbul’s most special places throughout the history of Istanbul. The Beylerbeyi Palace is situated in a magnificent location overlooking the Bosphorus.

The Beylerbeyi Palace reflects the splendid life of the Ottomans, and was built by Sultan Abdulaziz from 1861 to 1865. The architects of the palace were Agop and Sarkis Balyan. 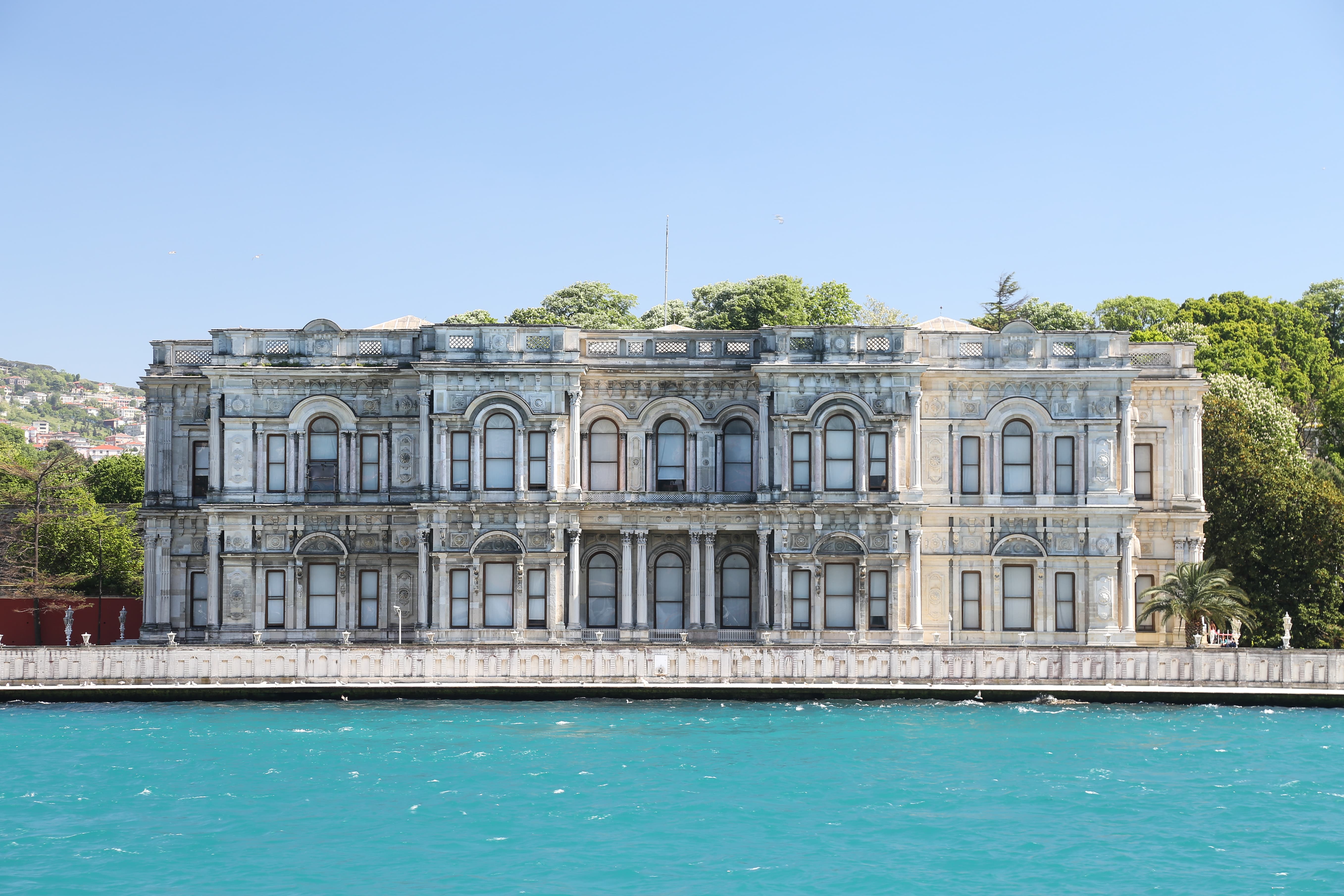 The French Empress Eugenie visited the palace and was said to have had replica windows based on those of the palace placed the Tuilleries Palace in her own country. (Maybe you’d like to see it yourself with a short trip to France!)

One of the most interesting facets of the palace is the Turkish motifs in the front. The inner decorations are embellished with a western ornament style. There are 26 rooms and 6 saloons in the three-storied palace.

There is a pool in one of the saloons in the middle of the palace. Besides verandas and horse stables there are also sofas, ornaments, carpets and curtains, all of which have been preserved to date.

You can visit the palace on all the days of the week from 09.00 – 17.00 except for Mondays and Thursdays. Museum admission fee is 20 Try.

Located just beneath the pedestal on the Asian side of the Bosphorus Bridge, the Beylerbeyi district has long been one of Istanbul’s most privileged. Today, the Beylerbeyi Palace is located here. The palace was constructed under the edict of Sultan Abdülaziz between 1861 and 1865 in place of an outdated wooden coastal palace.

The architects Agop and Sarkis Balyan under the edict of the Sultan constructed the palace, which is considered to be one of the masterpieces of the glorious Ottoman era. Beylerbeyi impressed many visiting dignitaries, including the French Empress Eugenie. She had the windows in the guest room duplicated for her bedroom based on the Tuilleries Palace in France.

One of the most striking features of the palace is in the facade and internal decorations. Eastern and Turkish motives are employed in combination with the ornamental elements of the West. In the three-storey palace, there are 26 rooms and six halls. Ornate chairs, ornaments, carpets and curtains from the palace have survived to this date. One of the halls, located in the middle of the palace, is equipped with a pool. Behind the palace are a large pool, terraces and stables.

You can visit the palace on weekdays, except for Monday and Thursday, between 09.30 and 17.30.

Located just beneath the pedestal in the Anatolian side of the Bosphorus Bridge, the Beylerbeyi district has been one of the most privileged corners almost since its existence where palaces were built. Today, the Beylerbeyi Palace, whose name is identified with the district, is located in here today. The palace was constructed under the edict of Sultan Abdülaziz between 1861 and 1865 in place of an outdated wooden coastal palace.

The palace, which we can consider as one of the masterpieces of the glorious Ottoman life, was constructed by the architect Agop and Sarkis Balyan under the edict of the Sultan. Beylerbeyi impressed many visiting dignitaries, including the French Empress Eugenie. She had the windows in the guest room duplicated for her bedroom in the Tuilleries Palace in France.

One of the most striking points of the palace is that especially in the facade and internal decorations, Easter and Turkish motives are employed in combination with the ornamental elements of the West. In the three-storey palace, there are 26 rooms and six halls. Pieces such as seats, ornaments, carpets and curtains in the palace could be survived to date.  One of the halls located in the middle of the palace is equipped with a pool. Again, on the back side are a large pool, terraces and stables.

Having been available for visiting since 1984, you can visit the palace at weekdays except for Monday and Thursday between 09.30 and 17.30.

Çirağan palace features magnificent architecture that fascinates everyone passing either overland or via the sea route.

Read More
What To Do In Uskudar, Istanbul?

Uskudar is a neighborhood of istanbul, turkey, located on the asian side of the bosphorus just across from besiktas.