Çirağan palace features magnificent architecture that fascinates everyone passing either overland or via the sea route.

The deluxe construction that catches your eye just on the right side while you are on your way to Ortaköy from Beşiktaş is the prominent Çırağan Palace. Having a very distinctive architecture indeed, Çırağan Palace is ranked among unforgettable Istanbul-related masterpieces for visitors. 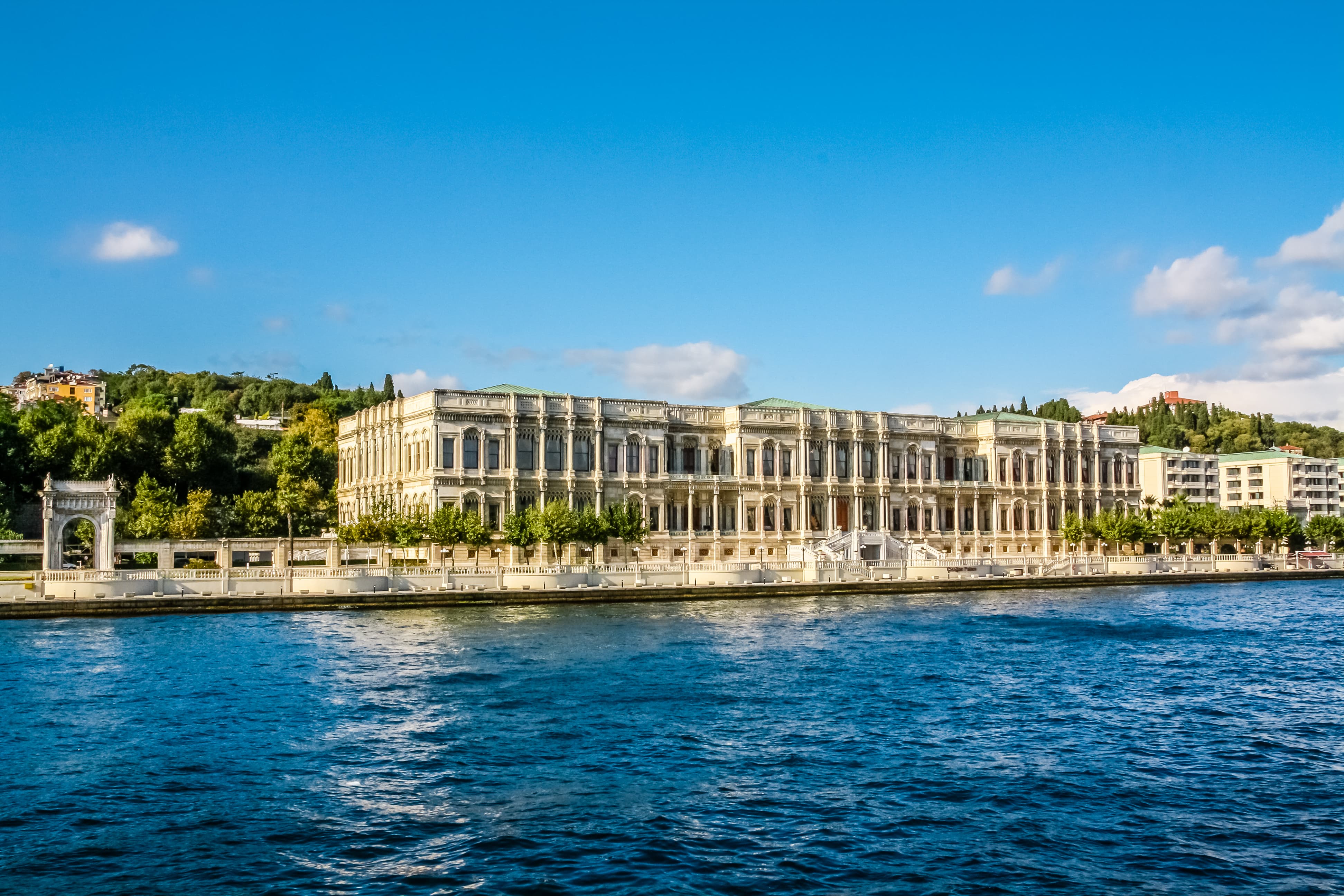 The most outstanding places of Bosphorus during the reign of the Ottoman State were reserved to the sultan and his family and also to the senior officers of the palace as a land for villa and palace construction. Being a representative of this tradition, Çırağan Palace that was constructed in 1861 when Sultan Abdülaziz ascended the throne appears as one of the most valuable buildings embellishing the coasts of the Bosphorus.

The most note-worthy section of the palace is its linkage to the Yıldız Palace by means of a bridge located on its back ridges. Rooms in the palace that hosts pedestals that are one of the nicest examples of stone embroidery were embellished with valuable carpets and furniture as well as golden gilts and nacre-coated needlework. Facades of the palace were made of colored marbles. Decorations on splendiferous doors were quite conspicuous. Exposed to a fire in 1909, the palace was then restored. It is employed as a five-star hotel today.

Çırağan Palace is one of the most popular buildings among visitors to Istanbul. It took its name from the “Çırağan Feasts” held in the 18thcentury. In the Ottoman Empire era, the most beautiful places along Bosphorus were traditionally reserved for the sultan and his family.

As a consequence of this tradition, when Sultan Abdulaziz came to throne in 1861, Çırağan Palace was built. A bridge connected it to the Yıldız Palace, which is right behind it.

For centuries, the palace has been one of the most precious buildings to enrich the shores of the Bosphorus. The columns of the palace are beautiful examples of stonework.

Besides precious carpets and furniture, there are rooms decorated by handwork covered by golden gloss and mother-of-pearl. The front walls of the palace are composed of colorful marble that add vividness to its architecture.

Being one of the pearls of the Ottomans with its magnificent seascape and architecture, Çırağan Palace has recently been used as a five-star hotel.

Inside The Ciragan Palace

One of the most opulent hotels in the nation right now is Istanbul's Ciragan Palace Hotel. Press conferences, lavish weddings, important meetings, and congresses are frequently held there. The imperial palace component of the hotel, which is its most prestigious area, contains 11 suites in addition to the 310 rooms that make up the palace's main hotel section's 20 suites. The only hotel in Istanbul that is reachable by car, yacht, and the helicopter is this one.

The wedding in Istanbul's Ciragan Palace is among the hotel's most well-known occasions. These weddings are suited for fairy tales, complete with an elite orchestra from the palace, first-rate cuisine, a charming wedding terrace, and breathtaking views of the Bosphorus that will have you believing you are on a Bosphorus cruise.

The hotel's most opulent accommodation, the Ciragan Palace Sultan Suite, costs $35,000 per night. It consistently ranks among the top suites in the world, and in 2016 it was listed as the ninth most opulent hotel suite in the world by Forbes.

You can have dinner in one of the palace's numerous world-class restaurants to sample meals that blend local and international flavors. Every day from 3 to 5 p.m., you can stop by the Gazebo Lounge to have a Ciragan Palace afternoon tea while taking in the unrivaled Ciragan Palace Bosphorus beauty and live music.

One of the best Turkish baths in the city is the Ciragan Palace hammam if you want to enjoy a Turkish classic. You have the option of receiving a Pasha or Sehrazat Treatment, both of which will revive your body and restore your sense of well-being. 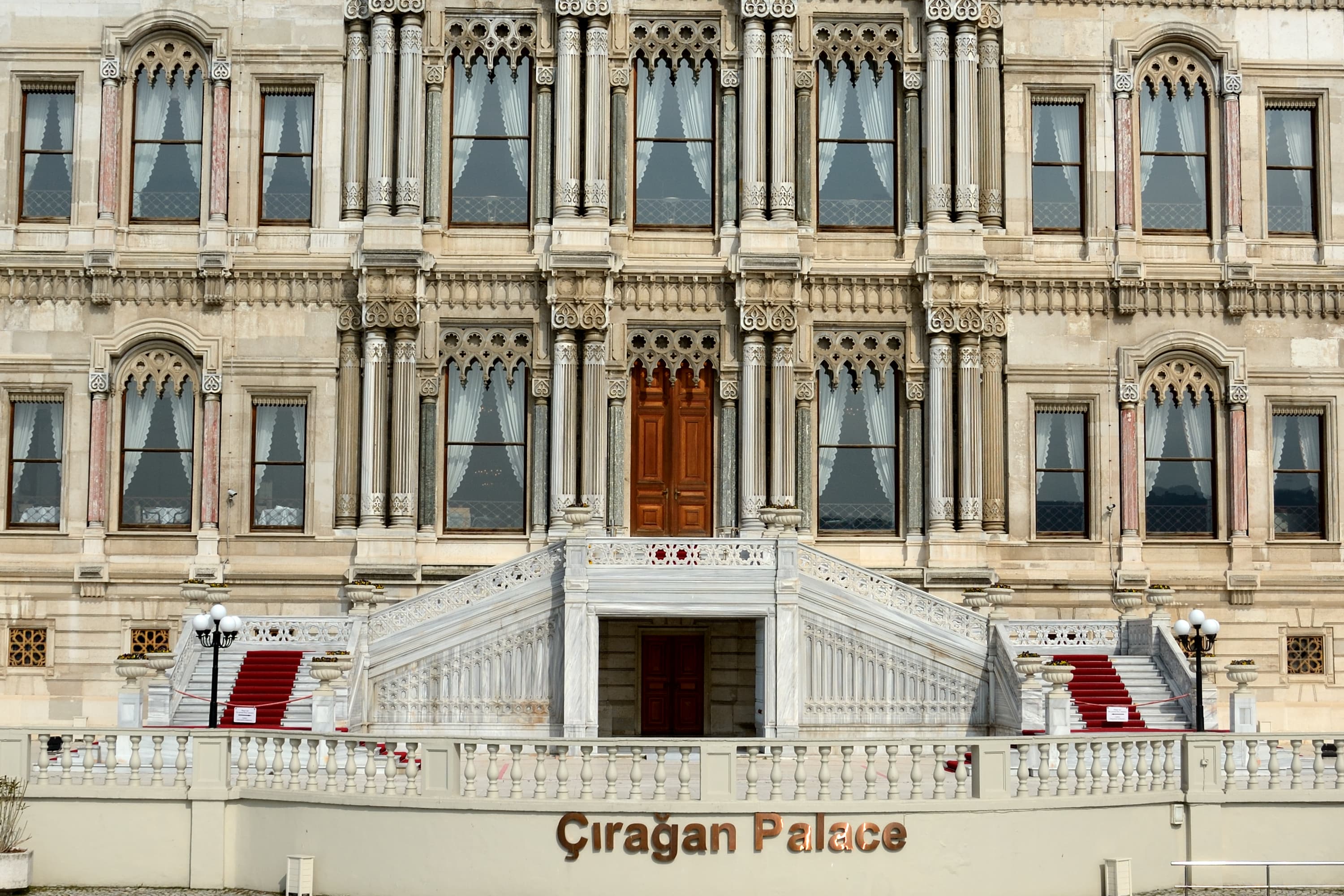 Where Is Ciragan Sarayı?

Although it would be more accurate to claim that Ciragan Sarayi is situated directly between Ortakoy and Besiktas, it is located in the Besiktas neighborhood on Ciragan Street. There are numerous IETT buses that stop nearby, however, there are no metro lines that may take you straight to the palace. The line with a halt in Ciragan most frequently is DT1. From a few of the M2 Yenikapi - Haciosman stops, including Gayrettepe, Taksim, Levent, and Nispetiye, you can board a DT1 bus. If you are near one of these destinations, you can use DT1 to get there directly, or you can take the M2 Yenikapi-Haciosman metro line to one of these stops and transfer to DT1 from there.

You may travel to the Findikli stop on the T1 Kabatas - Bagcilar tramway from Eminonu. One of the 30D, 25E, or 22 buses will take you right to the palace from there.

The palace is adjacent to several important historical and cultural sites in Istanbul, including the Yildiz Palace, the Ataturk Museum, and the Harbiye Military Museum, because of its accessible position

Yildiz palace is located inside a 500.000 square-meter woods between beşiktaş and ortaköy and it is one of the most interesting places to visit in istanbul.