Historical Mosque With A Great View

Of the many mosques in Istanbul the Suleymaniye Mosque is probably the most eye catching one. This is not simply due to the sheer size of the mosque, but because of it's magnificent location, historic importance and grandiose design. As one of the most imposing structures in the city, the Suleymaniye Mosque is as hard to miss as it is not to be missed. 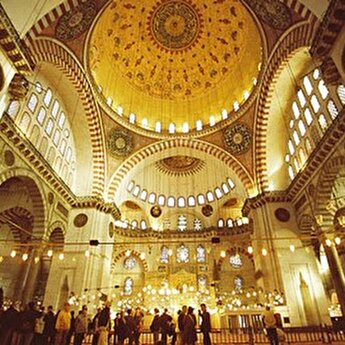 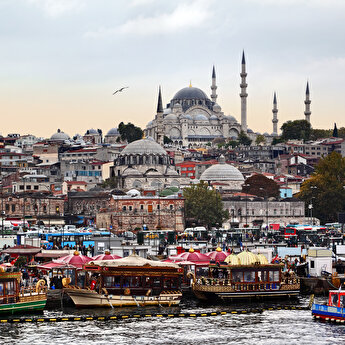 When should I visit Süleymaniye Mosque?

You can visit Süleymaniye Mosque out of pray times. On Friday Mosque opens to visit after 2:00PM

Is it expensive to visit Süleymaniye Mosque?

There is no entrance fee to Suleymaniye Mosque.

How to get to the Süleymaniye Mosque?

It is 10 minutes walking distance from Grand Bazar. To reach Grand Bazaar, you can take T1 Tram line to Beyazıt Stop.

Will I need a guide at Süleymaniye Mosque?

You can visit museum on your own but a tour with guide would definitely be better.

Things to do near Süleymaniye Mosque

Of the many mosques in Istanbul the Suleymaniye Mosque is probably the most eye catching one. This is not simply due to the sheer size of the mosque, but because of it's magnificent location, historic importance and grandiose design. As one of the most imposing structures in the city, the Suleymaniye Mosque is as hard to miss as it is not to be missed.


History of the Suleymaniye Mosque


The Suleymaniye Mosque is located atop one of the seven hills that Istanbul was built on. As such not only is it a very important landmark of the city, its also one of the landmarks that offer its visitors the best views possible. To speak of when the Suleymaniye Mosque was built; it was built between 1550-1557 by the most famous imperial architect of the Ottoman Empire, Mimar Sinan, on the orders of Suleyman I, otherwise known as Suleyman the Magnificent. But the Suleymaniye Mosque wasn't just built as a place of worship. The Suleymaniye Mosque is a massive complex that once housed a soup kitchen, a library, a madrasa, a preparatory school, a garden where one could take leisurely strolls and more. While the mosque is still used for worship, many parts have been closed and are used for touristic purposes. For instance, what was once a soup kitchen is now a sweet little cafe called the Daruzziyaye, where you can enjoy a cup of tea
.
The Suleymaniye Mosque bears great historic value for many reasons. First, because it was built by the most talented Ottoman architect to have ever lived. Second reason is that there are certain very important figures' graveyards. Who is buried in the Suleymaniye Mosque, you ask? Well, the tombs of Suleyman the Magnificent and his wife Hurrem Sultan (formerly known as Roxelana) are located on the grounds of the mosque. The mosque was built to be a testament of Suleyman I's accomplishments during the right. For instance, the four minarets of the mosque serve to signify the fact that Suleyman I was the fourth sultan to rule over the Ottoman Empire, once he became an empire.