Everything About Suleymaniye, Istanbul

Situated on the third of the seven hills of istanbul, the quarter of süleymaniye is like a bridge between the 16th century and the present.

With its structures standing straight and tall, and squares tucked away at every corner, it is like a fabled gateway leading to the past. The pigeons are the first to take notice of you. Facing the imposing historical gate to Istanbul University, the tomb of Sultan Beyazıt II and Beyazıt Mosque will be on your right, and opposite is the Beyazıt State Library, built in 1882. They serve as a preview to your excursion to the quarter of Süleymaniye. Sounds of poetry echo here beneath the ancient plane tree in the square. Especially in the warm summer months, amateur poets read their poetry in the square of the Plane Tree; yet, despite the heat, you may experience a strange tingle because the tree has repeatedly witnessed the ending of one era and the opening of another. As you are heading toward Süleymaniye Quarter and passing by the Calligraphy Museum, the pigeons rise with a sudden swoosh. That marks the beginning of the excursion. 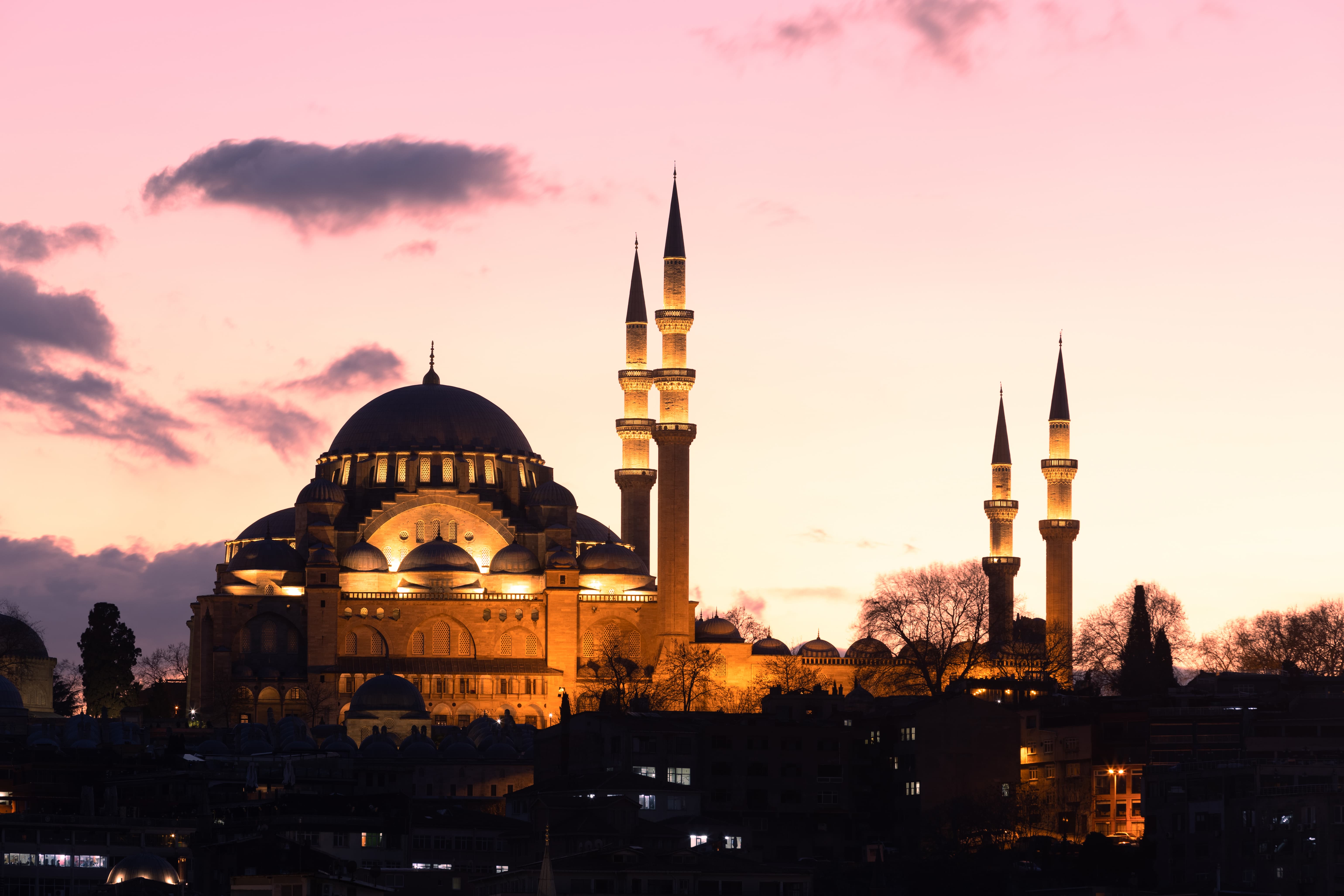 The History Of Süleymaniye Quarter:

The scene of numerous revolts in both the Ottoman period and the early years of the republic, the quarter of Süleymaniye was founded under Suleyman the Magnificent (1520–66), whose reign was the longest of all the Ottoman sultans. Possessing one of the most beautiful vistas of Istanbul, the quarter overlooking the Golden Horn takes its name from the mosque complex of Süleymaniye. The quarter, which sprang up in the environs of the 16th century complex, eventually became one of the most exclusive. Its residents were largely from the faculties of educational institutions; a class of learned men. It is related that those wishing to settle in the quarter were required to pay a certain sum for the privilege. Preserving its importance up until the first quarter of the 17th century, the quarter of Süleymaniye, because of its prestigious institutions, was directly affected by social disorders occurring in the Ottoman state in the 18th century. The changing context of the 19th century Ottoman Empire could be witnessed in the changes taking place in Süleymaniye. Now, military institutions cast a shadow on the pioneering advances by Süleymaniye in science, philosophy and literature. The façade of the quarter was limned by the Headquarters of the Imperial Ottoman Armed Forces, the Imperial Barracks, and the Süleymaniye Barracks. In the 20th century, with the collapse of the Ottoman state, the quarter of Süleymaniye gradually bade farewell to its former days of glory. For centuries, a quarter where only the elite were permitted entrance, Süleymaniye became the home of immigrants who had been forced to flee from various parts of the former Ottoman Empire. And now? As we walk in the direction of the mosque complex of Süleymaniye in whose vicinity is located one of the schools of Istanbul University, we experience some bewilderment. Government offices are housed in the historical structures of the quarter. The contrast between these relics of the past and the present is startling. The ubiquitous phenomenon of time in Süleymaniye leaves the observer suspended between the past and the present. The traditional structural fabric of the quarter of Süleymaniye, despite the effects of natural disasters like fire, especially since the 1950s, still persists. Today, instead of the madrasa, which occupied a dominating position in the Ottoman state, we have Istanbul University, and in place of the darüşşifa, or hospital, of the Süleymaniye Complex, we find the Süleymaniye Women’s and Lying-in Hospital, touristic restaurants are located in the former soup kitchen (darüzziyafe) of the Süleymaniye Complex. Descending the slope to the Golden Horn, the shops of the copperworkers, the dealers in glassware and china and in textiles, and the stationery shops located on the side streets of the quarter of Süleymaniye is like a heaven for small businesses. Leaving behind the streets and squares, the Ottoman Ayşe Kadın Public Bath today houses Süleymaniye Library, in which numerous valuable manuscripts are preserved, including that of Leyla and Mejnun, written by Fuzuli in 1535. Süleymaniye Mosque stands in all its glory just opposite!

And Sinan Turned The Key

The date was 16 August 1557. Süleyman the Magnificent, the most powerful ruler of an empire that ruled over many continents, commanded the imperial architect Sinan: “It is more fitting that you who have built this temple of worship should dedicate it with joyful sincerity and benediction!” A masterpiece of the ages was about to embrace humanity. Sinan approached the entrance of the work, whose silhouette was sanctified on the earth. In the presence of the crowd that had gathered and accompanied by prayers, the key was turned and the doors to the temple were opened to eternal time.

Süleymaniye Mosque, preceded by an enormous courtyard, is graced by the four tall minarets, whose number is said to symbolize the fact that Sultan Süleyman was the fourth to ascend the throne following the conquest of Istanbul. The combined effect of the colored glass windows, the wall-to-wall hand-knotted carpet, and the glazed revetment tiles inscribed with Koranic verses from the books of “Victory” and “Light” is dazzling. The mosque calligrapher Ahmet Karahisarı went blind from astonishment and that this is why his pupil Hasan Çelebi had to complete the work. Süleymaniye Mosque, accounted one of the most important examples of 16th century Ottoman architecture, was begun in 1550 and, including the three years devoted to the construction of the foundation, was completed in seven years. Imperial Architect Sinan, who was appointed by Süleyman I to construct the mosque, modestly described it as the work of a journeyman.The building materials for the Süleymaniye Mosque Complex, which includes a treasury, school, hospital, library, public bath, soup kitchen, and shops, were brought from all parts of the empire. One of the piers supporting the central dome was from the ruins of Baalbek, another from Alexandria, and the other two from ruined Byzantine works in Istanbul. Evliya Çelebi reports that the white marble is from the Marmara Sea and that the green marble comes from Saudi Arabia. Evliya Çelebi provides interesting information concerning the construction of the Süleymaniye Mosque: on the completion of the foundation, a one-year interlude intervened. The shah of Persia, Tahmasb Khan, hearing that the mosque would exceed the dimensions of Haghia Sophia, sent a casket filled with diamonds and precious stones to Süleyman, informing him that, in the event funds were insufficient to complete the mosque, he should sell the jewels. Süleyman’s pride was wounded on seeing the diamonds. In a rage, he exclaimed that each of the materials used in the building of the mosque was more precious than the diamonds presented by the shah and turned them over to Sinan. Sinan had the valuable gems expertly cut and placed them among the masonry of the minaret. For this reason, the minaret, which sparkles in the light of the sun, is called the Bejeweled Minaret.

The Genius Of Imperial Architect Sinan:

Imperial Architect Sinan, who displayed his genius in this supreme artistic work, Süleymaniye Mosque, signed his works as “Your humble and lowly servant, Sinan.” rests in a simple tomb sited between the mosque and the Istanbul Office of the Mufti. Overcoming the level of the contemporary technology, Sinan engineered special acoustics for the mosque and resolved the problem of stale air during times of the crowded attendance at prayer worship on winter nights by adding a room over the entrance for ventilation. What is most remarkable is the ink made from the soot collected in this room. Süleymaniye, one of the oldest quarters of Istanbul on the Historical Peninsula, is made legendary by the works of Imperial Architect Sinan and the most powerful Ottoman ruler, Süleyman the Magnificent. Their larger-than-life presence can be felt in every step you take in the quarter of Süleymaniye.

A Utopian World: The Botanical Garden:

Just outside the compound of Süleymaniye Mosque is the Botanical Garden of Istanbul University, with greenhouses, pools, gardens, and 5,000 species of plants.

The plants from other climes in a rainbow of colors create the impression of a utopia. The oldest botanical garden of Turkey possesses 10,000 species, with 127 families, 400 kinds of trees, and about 3,500 green plants. Containing nine greenhouses, the garden is plotted on 17 hectares and shares the same entrance with the Office of the Istanbul Mufti.

A Red Banana Tree And Piranhas:

As you stroll through the Botanical Garden, you are no longer concerned about your next appointment or any of your routine affairs. Greenness everywhere, flowers blooming all around. All the rest is unimportant. By virtue of the buildings constructed here to provide an ideal growing climate for the plants, you can experience a variety of different climates. For instance, thanks to a building that blocks the wind from the north, plants peculiar to the Black Sea grow in the front while on the back side it remains spring. The plants that thrive here come from all parts of Turkey and the world. Your breath will be taken away when you enter the greenhouse that provides a tropical climate. Here is a red banana tree, which yields fruit only once and which you cannot see anywhere else; there are also coffee trees whose leaves decorate the entire tropical green house. In fact, there are even piranhas in the specially heated pool.

The Botanical Garden of Istanbul University is open to all. Even if no employee is available to show you around, one of the faculty members will volunteer to do this. Admittance is free to the garden. In the case of group, 150 kurush per person is requested. The Kabataş-Zeytinburnu surface metro line goes to the Botanical Garden. From the Istanbul University/Beyazıt stop, it is about a ten-minute walk to the historical atmosphere of the quarter of Süleymaniye. Address: Ph: (9) 0212-455-5802Internet:

Time Out For Süleymaniye:

If you want to take a break during this historical journey, just across from the main entrance to the Süleymaniye Mosque, there are small eateries that serve beans, a specialty of the quarter. The beans of the Kanaat Restaurant, established in 1939, are excellent. Those who used to go there as students still go to Kanaat Restaurant whenever they have a chance. Four generations, father to son, have been personally overseeing the preparation of the bean dish. Before leaving the historical atmosphere of Süleymaniye Quarter, you can drink Turkish coffee and smoke a nargile in Lale Bahçesi beside the mosque. The restaurant next to Lale Bahçesi, Darüzziyafe serves some of the special dishes from Ottoman cuisine. The names of the dining rooms are special as well: the Mimar (Imperial Architect) Sinan and the dining room of Süleyman the Magnificent (Kanuni Sultan Süleyman).

Everybody loves desserts. Turkish desserts are amazingly varied and delicious. In this article we have gathered some of the well-known desserts of Turkish cuisine. You may be surprised the ingredients of some desserts. Try all of them and chose your favorite!

If you are planning to visit istanbul next summer, then you have to taste the great flavors of its traditional ice cream to break the heat of summer sun.

Kanlica is one of the first places that comes to mind when thinking about old istanbul.