You will surely marvel at the imperial magnificence of ottoman era on display at topkapi palace, the site for the rich lives of the sultans of ottoman empire. 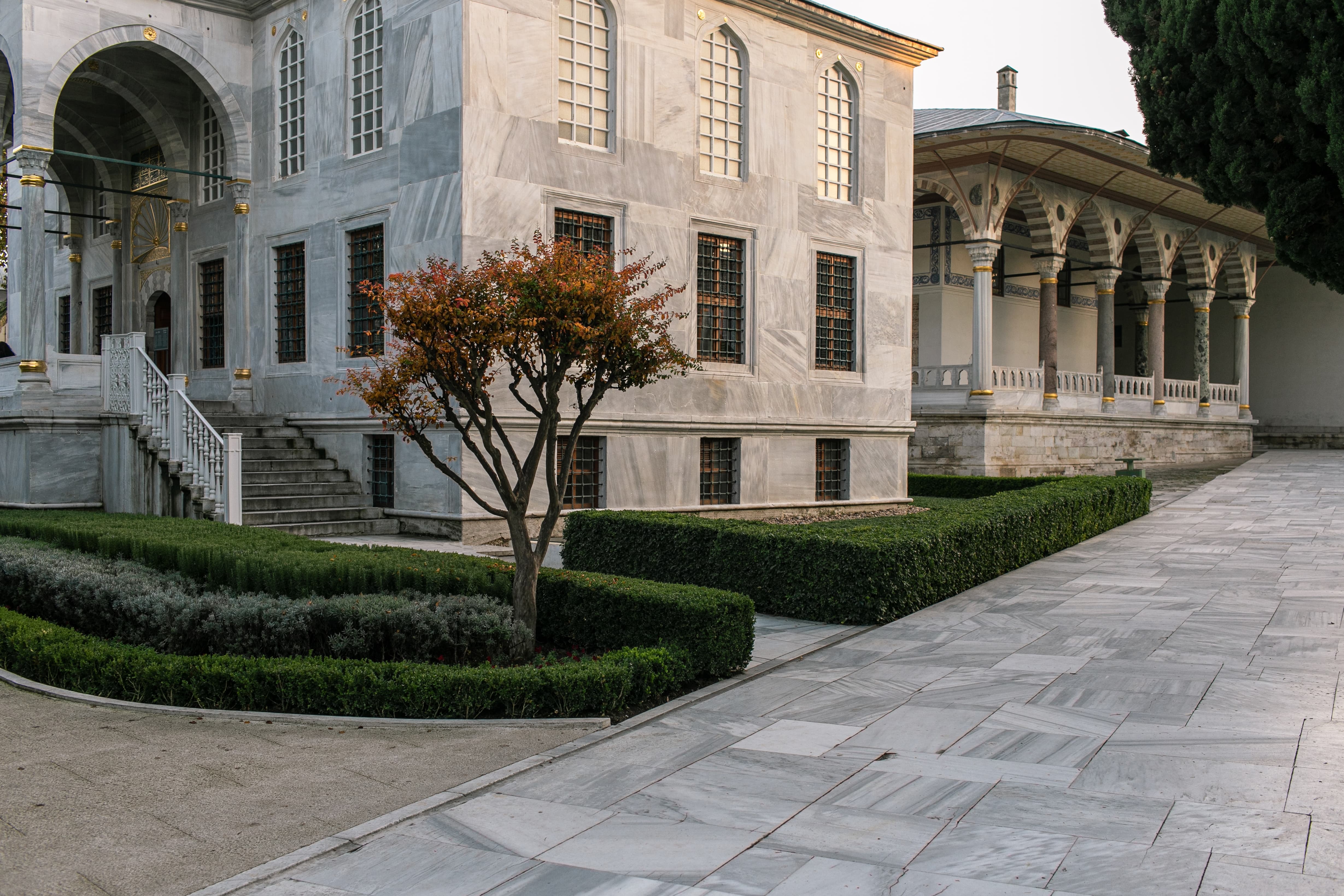 Four centuries of Ottoman Empire history took place here. You must be wondering when Topkapi Palace was built. The palace was built between 1460-1478 by Sultan Mehmet the Second.  If you are wondering who lived in Topkapi Palace, we can say Ottoman sultans and the people of the Palace lived in Topkapi Palace until the middle of the 19th century, If you ask what Topkapi Palace was used for, the answer is for state protocols and ceremonies. However, in the early 1850s it was decided that the palace did not meet the needs of the 19th century and was moved to Dolmabahce Palace. If you want to know what to see in Topkapi Palace, the sultanate treasury, Holy Relics, and imperial archives are preserved in here. The palace was converted into a museum on 3 April 1924 by the order of M. Kemal Atatürk.

Topkapi Palace is located in Sultanahmet. It's a short walk from Topkapi Palace to Grand Bazaar. The Bab-I Humayun gate is the closest gate to the Grand Bazaar. This area is a tourist zone with historical monuments and museums. The best time to visit is spring and summer as you can visit the gardens and courtyards. It is an amazing part of Istanbul old town.

Before the conquest of Istanbul by Sultan Mehmet The Conqueror, the Ottoman sultans have resided in the Bey Palace, which was built by Orhan Gazi in Bursa in 1326. Then, they started residing in the Old Palace (Saray-ı Atîk) which was built by Sultan Murad Hüdavendigar in Edirne. After the Old Palace, Ottoman sultans resided in the palace known as Saray-ı Cedid-i Amîre. The construction of the New Palace was completed during the reign of Sultan Mehmet. After the conquest of Istanbul, the first residence of the sultan was the Old Palace, where the current Istanbul University Central Building is located. After a short time, the construction of the Topkapi Palace was started by Sultan Mehmet The Conqueror.

The construction of Saray-ı Cedîd-i Ma’mure started in 1465 and ended in 1478. There used to be a wooden palace where this palace was located. The reason why this building was called "Topkapi" is that one of the doors of the old wooden palace was called “Top Kapısı" meaning Canonball Door in Turkish. The “Topkapi Palace Tower of Justice” in the Second Courtyard is the highest structure seen by the whole city. Well, you might ask why Topkapi Palace is important, it is because this structure shows the grandeur of the Empire.

Topkapi Palace, which was converted into a museum in 1924, is the first museum of the Republic period. The architectural structures, collections and nearly 300 thousand archival documents of the palace make the Topkapi Palace Museum and courtyards one of the largest palace-museums in the world.

If you ask about the Harem in the Topkapi Palace, let’s have a closer look. Harem means "Protected". It is the secluded part of the palace where sultans and their families lived. Built in the second courtyard and in the back gardens, this part is separated from the rest of the palace and carefully hidden. This division is accessed by an entrance named "Topkapi Palace Gate of Felicity (Babüsselam)". It contains more than three hundred rooms, nine baths, two mosques, a hospital, many wards, and laundry facilities. The sections that are open to visit are Karaağalar Taşlığı, Bondwoman Corridor, Sultan's Feast Table, Has Oda of Sultan Murad The Third, Crown Prince Room, Masjid of Harem, Gözdeler Taşlığı. Even just for seeing these beautiful Courtyards, Topkapi Palace worth visiting.

The conquest of Egypt by Yavuz Sultan Selim shows an important historical stage such as the passing of the Caliphate to the Ottoman sultans. After this event, the holy relics of the Prophet, known as the caliphate manifestation, including the Cardigan (Hırka-i Saadet), were transferred by Mutawakkil The Third, The Abbasid Caliph to Yavuz Sultan Selim. In the Division of Holy Relics, there are all these relics and many valuable objects that are brought and stored in later periods.

Collections in the Museum

The museum has 10 main collections of tens of thousands of pieces, including the Holy Relics. Also, there are European, Chinese, Japanese and Istanbul Porcelains and Glasses, Copper and Tombak Kitchenware, Silver Collections, Imperial Treasure which includes Spoonmaker's Diamond, Dresses of the Sultans and Dynasties, Collections of Portraits, and the Weapons Collection which includes 52 thousand pieces. Especially Topkapi Palace paintings are worth seeing.

Topkapi Palace And Harem tickets are sold separately. Museum entrance fee is 60 TL. The entrance fee to Harem and Zuluflu Baltacılar Ward is 35 TL. The Museum Card does not apply to the Harem Division.

It is forbidden to take photos inside the palace and to enter with a baby stroller. At the entrance to the Holy Relics Division, you must be dressed appropriately for a holy place. There is a nursing room at the Harem exit in the third courtyard - Enderun Courtyard of the museum. You can hire an audio guide within the museum.

The Topkapi Palace Museum is worth visiting if you are wondering about the history of the Ottoman Empire.

Even though salt galata is a work of art in and of itself, there are frequent exhibitions going on there. you should visit salt galata in accordance with the website's calendar. for instance, a current representative of photorealism in turkey is now having a show of his or her works. its title, our happiness pictures, criticizes the pervasive popular culture and its portrayals of turkey. a renowned architect will attend a meeting later on the topic of publishing architecture. these are only a few of countless examples. in case you are interested, you can still visit the ottoman bank museum.

View All
When Is The Best Time To Book Flights To Istanbul?