Heybeliada is the second biggest island of the prince islands and a must-see of istanbul!

In his famous song describing the joy of the island, Yesari Asım Arsoys says “Every night in Heybeliada we walked under the moonshine”. Even if you cannot walk yourselves through the moonshine every night, this rare island is a charming place for a weekend escape. At every side you lay an eye on, you happen to see the shades of blue and green. You row your boat with joy. The people who are addicted to the islands know well that the joy of the island begins when you first get on the ferry. If you’re lucky, you find yourself a good place to sit on the deck in the open air. You begin to share the bagel with the seagulls, letting the soft breeze of Marmara caress your face kindly. As you relax with the chatter of the youngsters and the children, the cries of the seagulls and the sound of the waves beating the ferry, you do not even recognize the long distance that you have travelled. Then you begin to count the piers in turn; Kınalıada, Burgazada and at last with its green grandeur Heybeliada. 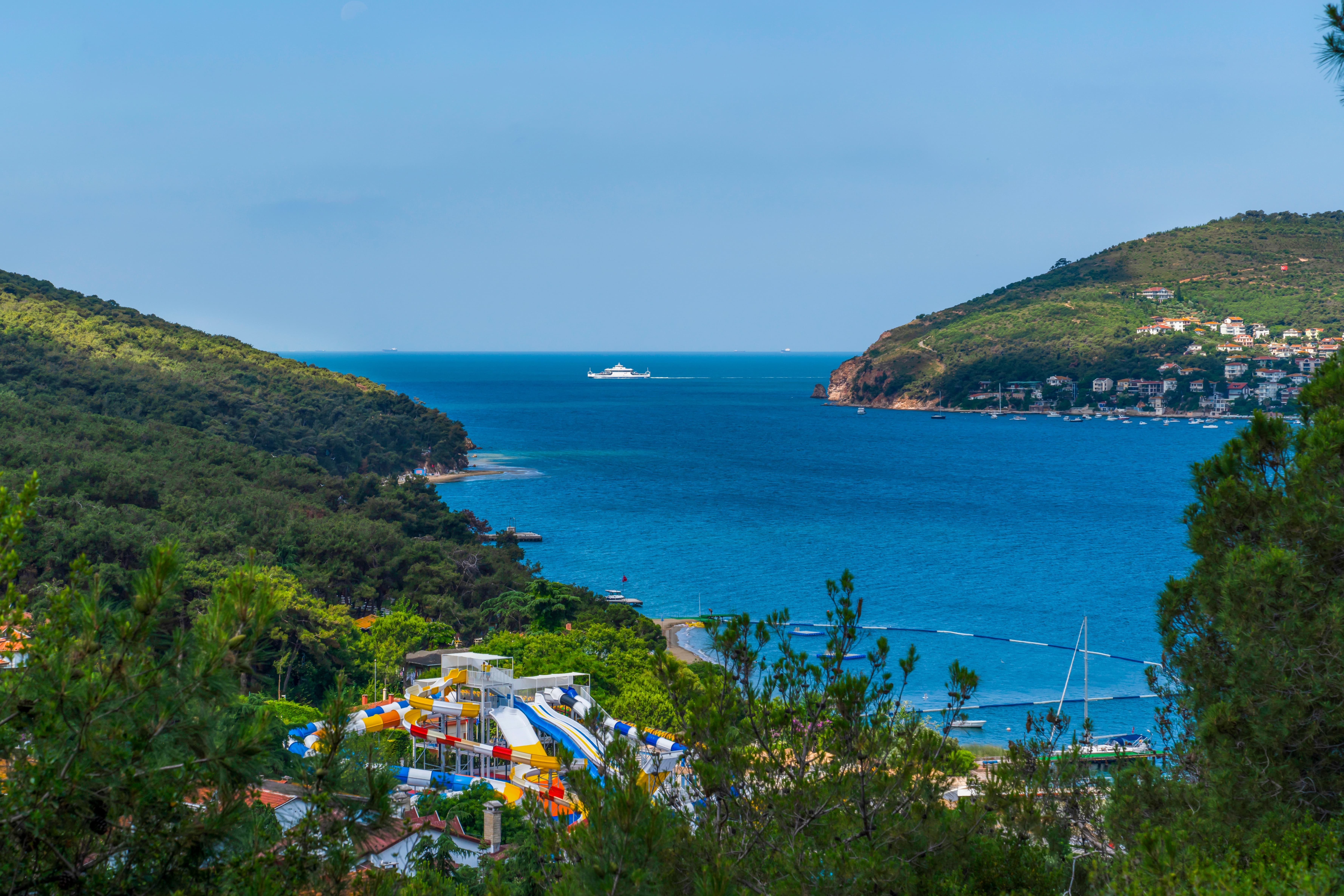 The island, known as “Halki” for the copper mine on it, is called “Heybeliada” because it resembles a saddlebag. When I was a child, somehow I thought that this name was given because of the huge trees, with cones covering the roads. The name Heybeli must have evoked the name “heybetli” (grandeur) in my mind. Now, at last we’ve arrived at the island. I look for someone who waits for me on the pier for some reason. It is as if my grandfather is about to greet me with his cap on his head, with his jumper befitting his green eyes. In fact, there is no one else apart from a few island dwellers. The images of the old inhabitants of the island are parading in front of my eyes. Over there, Aziz Nesin is running in his shorts. I cannot recall, but is it Ahmet Rasim near Aziz Nesin, or is it Hüseyin Rahmi Gürpınar? There, Orhan Pamuk sits in the shade of a tree, as if he were designing new faces for his novels. I wonder if it is İsmet İnönü walking with a crowd around him. We had better return to our times and step on the island from the pier.

Hail To You, Beautiful Trees And Wisterias

People who are familiar with Heybeliada know well that the Maritime High School greets you first. This building, keeping company to the dreams and secrets of many youngsters, and defying the years, calmly welcomes you. When you look at the cafés and restaurants and take the road to the right of the pier, the trees and the wisterias, if it’s their season, greet you. In Heybeliada, there are some monuments whose history you can virtually feel. But you may prefer resting, lying among the white daisies and various colored flowers rather than losing time with the buildings. Picnicking in those beautiful fields, under those trees and among those flowers is absolutely forbidden. Anyway, as you see that beautiful scenery, you may prefer being a loyal spectator than being a part of that scenery. Please welcome the monuments of the island that have laid their mark in the history…

The Holy Theological School of Halki is one of the most attractive elements of the island. Many sources confirm that this monastery was founded by Patriarch Photius in the 9th Century. The building now used as a monastery and church was founded in the monastery in 1844 by Patriarch Germanos in order to educate clergymen. Until its closure in 1971, it has trained almost 1000 clergymen. One of the unknown features of the school is its library, with over 120,000 books on its shelves. In this library, there are many precious books, from Greek and Latin classics to Byzantine History, from law to archaeology. The Hellenistic Trade School, one of the historical buildings on the island, was opened in 1831 and had thousands of students. In the past, the visits of the families of the students in this school were among the most important events that livened up the island. The Christos (Makarios) monastery is situated on the Makarios Hill. The Greek Orthodox Ayios Nikolaos Church was built on the grave of Patriarch Samuel I, who died in 1775. The Aya Yorgi (Saint George) Church was built over a high sea cliff, and is also called ‘Krimnos Precipise’ “the monastery of the abyss”. The Heybeliada Sanatorium, which was built to capitalize on the clean air of the island, and which was served as a source of cure and hope for the lung patients, is now closed. With its paint and mortar peeled, it is as if left for dead, exhausted and tired among the pines…

A Hidden Sanctuary Behind He Hills: Hüseyin Rahmi Gürpinar Mansion

How about being a guest to Hüseyin Rahmi Gürpınar? The mansion is built on a place near the top of Heybeliada, and gives you peace as it reveals the grace of the island’s panorama. The mansion was built by Hüseyin Rahmi in 1912 and has three storeys. The famous novelist, who had lived in this mansion until he died in 1944, sometimes climbed to his house on donkey back due to lack of roads. Hüseyin Rahmi, who settled close to the pier at first, had this mansion constructed over the hill in order to get away from the neighbors he was uncomfortable with. The mansion was transferred to the Special Provincial Administration by the beneficiaries in 1964 and was left to its fate. Many of the novelist’s belongings have been damaged due to neglect and pillaging of the visitors. By means of personal efforts of some students, some officers and Mrs. Hatice Farsıkoğlu, spouse to the district governor, some of the belongings were repaired, some of them were brushed up and the mansion was opened as a home-museum. One of the most interesting details on this mansion is that it is possible to see the embroideries, vignettes and lacework Hüseyin Rahmi himself braided. The famous novelist had crocheted these embroideries with the same care and delicacy as he designed his books.

While Walking Down The Hills Of Heybeliada

After leaving Hüseyin Rahmi Mansion, you are getting closer to the pier with each step you take, following the walkways climbing down the hill. If the season is spring, do not forget to inhale the smell of the wisterias. İsmet İnönü, who is known as the “Second Man” in our country, has a very cute, pink-white house in this island. İsmet İnönü, who caught dysentery and considered the sick leave offer of the doctors, came to this island in 1924, and settled in this house, which once belong to a Greek family, and he would buy it later. He decided to buy this house in which spent holidays in 1934. Atatürk bestowed all the household goods needed to İnönü Family. After many years, the İnönü family had used it as a summer house, and later it was turned into a museum by the İnönü foundation. There is a small house that belongs to Ahmet Rasim, but it was devastated due to negligence.

For Whom The Bell Tolls

Do not get surprised when you hear the bicycle bells as you wander in the streets of the island. The island dwellers have solved the transportation problem of the island with bicycles, where motor vehicles are banned. The contradiction of the old, discolored buildings with the modern villas reminds the blight of Istanbul. But this contradiction presents peaceful views with wisterias, huge trees, various flowers and the joyful songs of birds. Some of the points that will attract you on the island are benevolence and favor. Everybody is eager to help and give a hand. If you say that you are tired, you should be on the look out for the phaetons. To have a ride on the phaetons, the essential transportation vehicle of the Prince Islands, it is somewhat expensive.

Fish Time On The Pier

To have a delicious fish meal and to stop and rest, you may enjoy one of the cafés and restaurants located along the road on the right side of the pier. If you think that you may have trouble choosing among various options, here are some suggestions; Halki, Ambrosia and Mavi Restaurant are among the most preferred places for a fish feast. If you would like to rest while sipping your glass of steeped tea, you may enjoy Bahar Café. There are some small hostels on the island. But, while you’re here, Halki Palace should be your choice, in order to stay in a historical place and to enjoy your rest. The hotel, estimated to have been built between 1852-1862, was occupied by the students of the Hellenistic Trade School. The hotel continues to serve the guest of the island with the same delicacy and care.

Reviews
€28.00 / Per Person
Entrance Ticket
Turkish Marbling – Ebru Workshop in Istanbul
Join us for a fun and unique workshop to find out the history of Ebru Art and make your own!

View All
Istanbul In Two Days

Istanbul is a very big city, old and colorful. the beauty of istanbul is the perfect mix between the pretty fresh soul healing nature, and the ancient history behind the districts and statues which open our minds to the rich turkish and ottoman cultures. visiting istanbul can take a day, a week or even a month. even locals say that istanbul never ends, but what if you have only short amount of time and want to spend it perfectly. in this article i am going to escort you through istanbul recommending what to do and where to go in two days plan.

Read More
How Many Days is Enough to Visit Istanbul?

Did you come to Turkey primarily to tour Istanbul? Or do you want to visit other Turkish destinations as well? Istanbul is a fantastic tourist destination in and of itself.