Visit the Spice Bazaar and Rüstem Pasha Mosque, plus enjoy a 90 minute Bosphorus cruise to see Istanbul's best landmarks from the sea. ...

Visit Eyup Sultan Mosque, the most sacred place for the Islamic community after Mecca and Jerusalem. Then take the cable car to Pierre Loti Hill and enjoy the view. ...

What is Golden Horn Istanbul?


The Golden Horn is the sleeve that separates the old part of Istanbul from its modern part. The Golden Horn, also known by its modern Turkish name, Halich, is the city's main waterway and is the Bosporus' primary entrance to Istanbul. 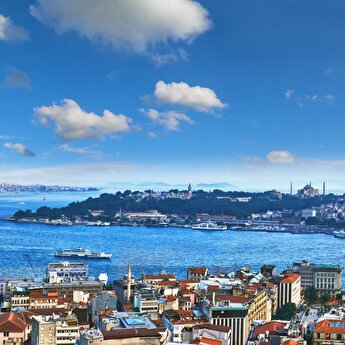 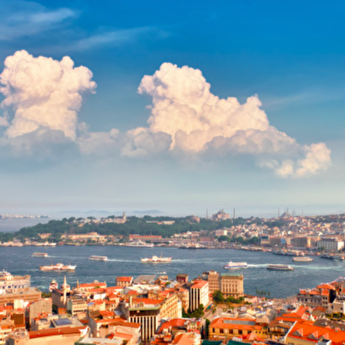 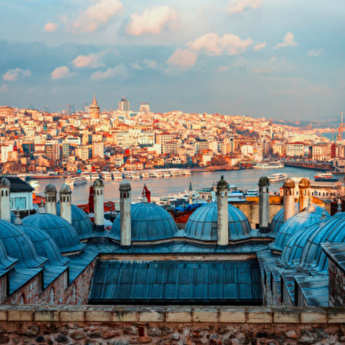 What is Golden Horn Istanbul?


The Golden Horn is the sleeve that separates the old part of Istanbul from its modern part. The Golden Horn, also known by its modern Turkish name, Halich, is the city's main waterway and is the Bosporus' primary entrance to Istanbul.


Where is Golden Horn?

As a natural estuary that connects to the Bosphorus Strait at the point where the Strait meets the Marble Sea, the waters of the Golden Horn help define the northern boundary of the peninsula that makes up "Old Istanbul" (ancient Byzantium and Constantinople). This estuarine entrance geographically separates the historic center of Istanbul from the rest of the city and forms a sheltered horn-shaped harbor that has protected thousands of Greek, Roman, Byzantine, Ottoman and other naval merchant ships throughout history.
With 20 years of experience, Istanbul.com provides great travel opportunities for travelers. Use the istanbul.com to join the activities in Istanbul.

The Golden Horn is the confluence of the rivers Alibeyköy and Kathıthane, formed when the waters of the Bosphorus flooded their common trough in prehistoric times. It has always been the main port of Istanbul, it can even be argued that Istanbul would never have existed in such a glorious way had it not been for this well-sheltered. In the 18th century, the banks of the Horn and the rivers forming it, decorated with palaces and castles, which were surrounded by large tulip gardens, served as entertainment for the Ottoman high society. Archaeological records show a significant urban presence in and around the Golden Horn dating from at least the 7th century BC, with smaller settlements dating as far as 6700 BC, as evidenced by recent discoveries of ancient merchant ships' ports, warehouses and fleets excavated during construction work. Yenikapı subway station and the Marmaray tunnel project. The ancient Greeks originally settled on this peninsula, establishing a colony and raising the city of Byzantium, which would later become Constantinople, and finally Istanbul.  Constantinople Golden Horn was the harbor of the city until the end of the XIXth century. After the fall of Constantinople, Greek citizens and other Orthodox Christians, Jews, Italian merchants, and other non-Muslim populations began to settle and live along the Golden Horn, in the Fener and Balat neighborhoods. The first bridge over the Golden Horn, the Galata Bridge, was erected in 1836, thus linking Old Istanbul with Galata, the fourth on the opposite side of the Horn.
It represented the natural harbor of the Byzantine capital, whose entrance during the attack on the city was enclosed by a large metal chain that prevented the entry of ships into it and protected the city from attack from that side. Golden Horn 7.5 kilometers long and at its widest part separates the two mainlands at a distance of 750 meters. It reaches the highest depth just at the point of Bosphorus, 35 meters.


The Historic Bay Separating the European and Asian Parts of Istanbul

Today, with the development of the city, it has lost its importance as a large port, but therefore plays an important role in the city's transport by water, as well as a specific tourist attraction represented by the old Galata Bridge with its restaurants. Today, both coasts are home to residential areas, while only the coast has been transformed into landscaped quays where, among other things, the so-called. Bulgarian St. Stephen's Iron Church, and industrial waste is no longer discharged into the waters of the bay. In addition to the Galata Bridge located at the entrance to the bay, the Golden Horn is bridged in two other places by the Ataturk and Halich Bridge. It is interesting to mention that in 1502 Leonardo da Vinci created the conceptual design of a bridge over it without columns, however, his idea was never put into practice, but served as a preliminary design for the construction of a slightly smaller bridge in Norway. There are two Golden Horn bridges in Istanbul. The Golden Horn Metro Bridge is a steel cable-stayed bridge along the M2 line of the Istanbul Metro, which runs through the Golden Horn in Istanbul. It connects the Beyoglu and Fatih districts on the European side of Istanbul, and is located between the Galata Bridge and the Ataturk Bridge, about 200 m east of the latter, it is the fourth bridge over the Golden Horn and began operation in February. The bridge provides a direct connection between the Haciosman metro station in Sarıyer district, with the Yenikapı transport hub in Fatih district. The second Golden Horn Bridge is about 3 km to the north, connecting the Ayvansaray district in the southwest and Halicioglu in the northwest. From Galata Tower to Golden Horn you can go over said bridges. Also there is a Golden Horn boat tour. You can join a boat trip where you will see the Golden Horn as well as the Bosphorus. During the 2 hours you will travel the river that separates Asia and Europe, passing various prominent routes. In Golden Horn Bosphorus tours you will see the most spectacular sights along the coasts of the Bosphorus, including the Dolmabahce Palace, the Ciragan Palace, the Maiden Tower, the Bosphorus Bridges, the fortresses of Rumeli and Anadolu and the Ottoman residences. Also you can take and enjoy the Istanbul Classics - Old City Tour.
You will enjoy cruising Bosphorus Cruise & Sightseeing Golden Horn tour and the beautiful long shores will give you the opportunity to experience the splendor and splendor of Istanbul. It is a special pleasure to sail here in the spring, because then the tree of Judah, a symbol of Ottoman Istanbul, blooms. It is named after a famous Bible episode, and according to agronomists, it is one of the oldest tree species in the world. The purple and purple colors of its flowers, which cover parks, streets, cemeteries and promenades along the coast, will rarely be forgotten. Pierre Loti Café is a point you should definitely head to if you want to see the magnificent view of the Golden Horn. Here, Loti, a French Orientalist, spent his time staring at the waters of the Golden Horn and indeed, there is no better view than the one provided from here.
On our istanbul.com you can also find information about all the Istanbul sights you want to visit. You can book your trip safely and use secure payment options for credit cards which protected by international infrastructures. Istanbul.com also offers a live chat service, so you can ask the experts for the help you need.

It was 3 hours but enough. We did not hurry while visiting the points. Our guide was a experienced one. We got the answers of all our questions. Even when we asked why Turks called the mosque as cami. It is consist of the Turkish meanings first letters of four angels.

Non of parfumes have the smell of Spice Bazaar. You see the Rustam Pasha Mosque from outside as a regular mosque. But when you enter you see the marvelous design by the architect Sinan. After this architectural beauty we went to see the natural beauty, Bosphorus.

I think Istanbul is an undeveloped city in terms of cable cars. I saw just 2 place. Could be more. I felt the mystic atmosphere during the mosque visit. This mosque has an importance for Islamic people.

I can say the shores of Golden Horn were crying because of neglect. It is used as a autopark of boats.

It was our first morning in Istanbul so the tour was good to get a feel for the city. The spice market was good to see - it’s not so much of a tour but time to walk around the market, which was fine for us. The boat tour (which is the main reason for people going) was a little disappointing.