See Istanbul's most popular attractions along the Bosphorus including palaces, mosques, and fortresses.... 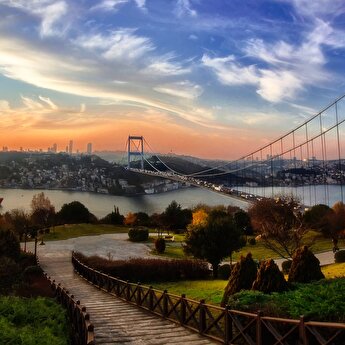 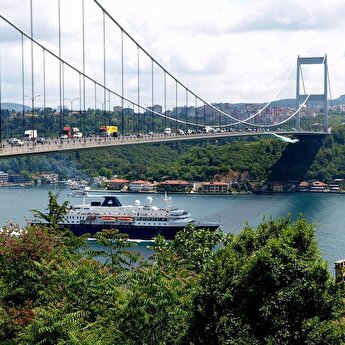 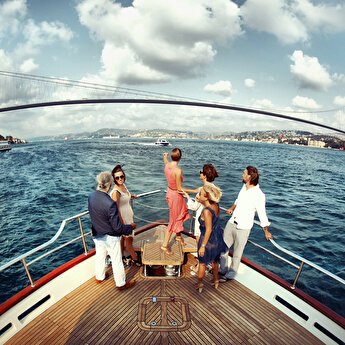 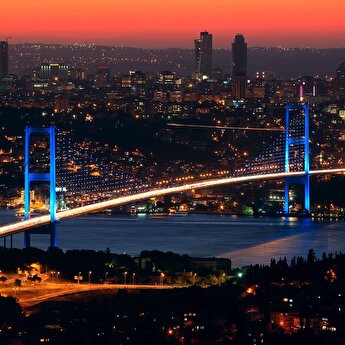 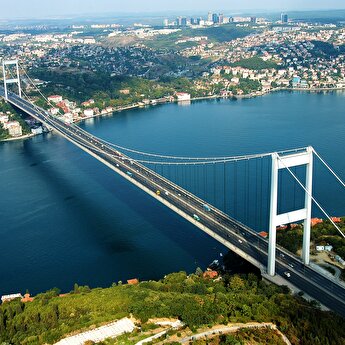 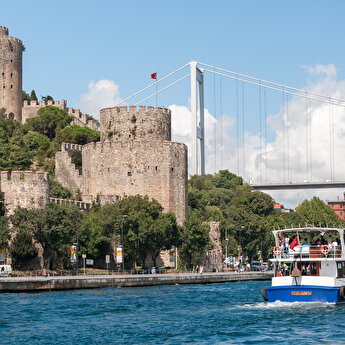 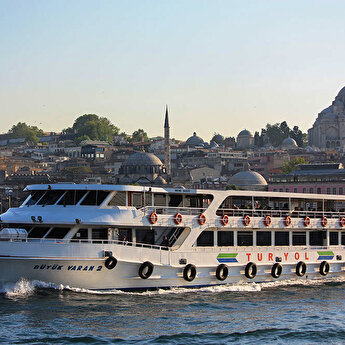 The Myth of Bosphorus

Bosphorus Istanbul owes its name to the Thracian culture and Greek mythology. The name refers to one of the lovers of the God Zeus, who had to convert the beautiful girl to a cow against Hera’s anger. The poor cow had to swim and cross the strait but couldn’t get rid of Hera’s rage in the end. The strait is traditionally called ¨Boğaziçi¨ meaning ¨inner strait¨ which is linked to its strategic importance as it is one of the two passways between the Black Sea and the Mediterranean Sea. Its width varies from 730 to 3300 meters with the depth varying between 50-120 meters. This large-scale channel has always been significant for the rulers of two continents, being always at the core of conquests. In 1453, when Sultan Mehmed II conquered Istanbul using sliding ships on the land towards the Golden Horn, Bosphorus and Istanbul started to be reigned by the Ottomans and since then it has been the symbol of the city.

Transportation Alternatives on the Bosphorus Strait

Serving as a busy international waterway, Bosphorus Strait was planned to be strengthened by a bridge in the 1970s. The Bosphorus Bridge or Boğaziçi Köprüsü was the first one opened in 1973 to connect Ortaköy and Üsküdar. Fatih Sultan Mehmet Bridge, linking Anadolu Hisarı to Rumeli Hisarı, was built to alleviate the traffic in 1988. To the north of the Strait, the third one called Yavuz Sultan Selim Bridge was completed in 2016 and connected Garipçe and Poyrazköy. These two latter ones also include highways for intercontinental transport. There are also two subterranean tunnels to unite the Bosphorus Strait; Marmaray is used as an underground line while Eurasia tunnel is just for automobiles. So, there are three Bosphorus Bridges and two tunnels actively used for commuter and international transport.

Bosphorus is worth to visit not only for business but also for recreation and eye appeal. Alongside the Strait on both continents, there are exceptionally attractive views of Ottoman architecture created by manor houses and palaces. Most of the tourist attractions also have some kind of this magnificent scenery. This results in a variety of things to do in Bosphorus - sightseeing, tours with cable car and Bosphorus dinner cruise with the show.
Among many alternatives, Bosphorus cruise day or night arranged by Istanbul.com expertise emerges as the most time-efficient and enthusiastic way for how to visit Bosphorus easily. One of the favorites of travelers is Bosphorus Cruise and City Sightseeing tour which makes you enjoy the magnificent architecture of Dolmabahçe and Çırağan Palaces on the European side while capturing Beylerbeyi Palace among many manor houses on the Asian coast. If you plan to have a full day to explore the Bosphorus from the south to the north, then  Bosphorus Cruise and Black Sea Tour which allows you to see more peaceful parts full of natural colors in Poyrazköy, Küçüksu, and Anadolu Kavağı. This tour is organized in a concept of Bosphorus cruise with lunch to spend more time for sightseeing by the meal served on the boat.
Bosphorous and Golden Horn Sightseeing Tour is organized for the ones who would like to discover two important waterways together. Sightseeing part comprises the Spice Bazaar tour and the cruise part goes along beautiful Bosphorus. Alternatively, you can get on the tour in Üsküdar.
Another commonly preferred one combines the Golden Horn Tour with Bosphorus Cruise and cable car tour in Pierre Loti. Bosphorus Cruise with Old City tour is a full-day program starting with old-town sightseeing in Balat and Fener while cruising to Rumeli Fortress in the morning. The afternoon program is arranged as a Bosphorus tour with cable car on which you can enjoy the city from the highlands of Eyüp and beautiful Pierre Loti

If you would like to see the uniquely illuminated palaces while tasting traditional Turkish cuisine on the boat, Bosphorus Dinner and Show Cruise offers that in a cozy atmosphere. This concept of Bosphorus cruise dinner with Turkish show includes traditional ceremonies of whirling dervish and Mehter march as well as folklore elements like Caucasian dance, folk dance and belly show.
How to get Bosphorus cruise is easy as you can select your schedule and the type of cruise among Istanbul Tour Events arranged by istanbul.com expertise. Pick up service availability from central locations or for some tours, just at your hotel makes you free of stress with where to get Bosphorus cruise. If you would like to join that after another sightseeing tour, then you can check one near Beşiktaş where Bosphorus cruises startup.

Elegant Accommodation Choices on the Bosphorus

To enjoy the beautiful scenery of the Bosphorus during your stay, there are a large number of hotels with a Bosphorus view. One of the best choices, Four Seasons Istanbul Hotel Bosphorus always remains at the top of the list with its exclusive services, stylish decoration and certainly with its wonderful view of the Bosphorus from the European side. If you are interested in accommodating at an authentic location on the Asian side, Sumahan on the Water fulfills more than you expect. Being a boutique hotel in a renovated manor house in Çengelköy, it reflects a peaceful but elegant atmosphere of the ¨yalı¨ houses. Another five-star choice on Çırağan Street is a formerly Ottoman Imperial Palace, serving nowadays as an ultra-luxury hotel. Çırağan Palace Kempinski Istanbul offers all the details of Ottoman-style luxury combined with modern delicacies. Situated on Çırağan Street, this five-star hotel is just close to Ortaköy where the Bosphorus Bridge is located on the European side. Çırağan Palace Kempinski Istanbul is also renowned for having an exclusive Bosphorus restaurant with view hosting high society wedding and reception banquets.

Very well designed a palace, Pier Loti mountain is unbelievable. Cable car is another experience. Should be tried!

We were staying in a far hotel to city center. Needed to come on our own to pier. Will be better if they put transfer service to all hotels. Foods and drinks were good. We got unlimited local alcoholic drink upgrade with a small supplement.

It was amazing experience onboard. Enjoyed a lot!

Have you ever met a potato mountain? I did. :) Before you get the boat take one. I can describe it only in one word. Magical. :)

While we embark our boat we saw very nice small boats on Golden Horn. When i asked to our guide, he said they are Sultan Boats. In my mind. Should be investigated before we back to home.

I don t know why all the promoted attractions of Istanbul from European side. There are lots of places to visit on otherside. Kuchuk Sue Palace was very nice designed as architectural. And after this tour i learnt its name is used as a phrase in Turkish, :))) When you join ask your guide for what they use Kuchuk Sue as well! :))

Near the traditional visiting places Kucuksu Palace is a secret beauty on Asian side. We saw a small Dolmabahche Palace.

I got lots of knowledge about the buildings located on Bosphorus shore. As architectural nice palaces.