Get skip-the-line admission with your talented guide and visit the famous underground cistern. ...

One of the attractive historical reminders of the Byzantium era, Basilica Cistern gets more and more attention by travelers in Istanbul. Basilica Cistern, sometimes called Underground Cistern fascinates both with huge size and its mystical atmosphere.
​​
Read more... 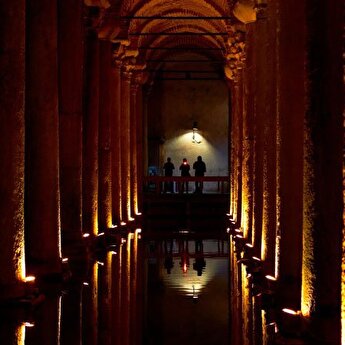 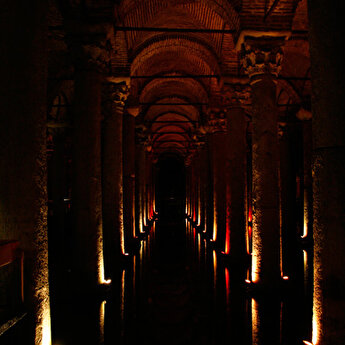 When should I visit Basilica Cistern?

You can visit Basilica Cistern everyday 9:00AM to 6:30PM The museum is more crowded on the weekends. The museum is closed for visits for half-day on the first day of Ramadan and Sacrifice Festivals.

Is it expensive to visit Basilica Cistern?

The museum ticket is 20 TL, which is around €3. The ticket is free for kids under 8.

How to get to the Basilica Cistern?

Will I need a guide at Basilica Cistern?

You can visit museum on your own but a tour with a guide would definetely be better. You can check Guided Basilica Cistern Tour or our top picks below.

Things to do near Basilica Cistern

The Basilica Cistern is located in Sultanahmet, the heart of Old Town. It is in a-few minutes-walk from the Blue Mosque and easy to reach to Basilica Cistern from the southwest of Hagia Sophia Museum. Many travelers wonder about what Basilica Cistern is and what function it used to have. In fact, during the Byzantium era, Basilica Cistern was built for reserving rainwater and it used to be the main water reservoir of the city. It is known that Emperor Justinian I built the Underground Cistern around the midst of the 6th century. There is also a basilica in the cistern that gives the commonly used English name to the structure though traditionally, it is called ¨Yerebatan Sarnıcı¨ referring to its original function of underground water supply.

Basilica (Yerebatan) Cistern was used to reserve water for the Imperial Palace and neighborhood residences of Constantinople until its conquest by Fatih Sultan Mehmet. After 1453, it was used with this function for a short while and was left useless when the Ottoman architects built their own running water facilities around Topkapı Palace and Istanbul. It was a hidden mystery for Petrus Gyyllius, a Dutch traveler, who discovered Underground Cistern in 1545 during his city walks. There were houses constructed on the cistern but fishmongers were selling a variety of fish caught in that hidden beauty. It has to wait until 1987 when Istanbul Municipality finished the cleaning of this fascinating palace-like structure to open it as a so-called Yerebatan Museum.

Surprising Details about the Cistern

Basilica (Yerebatan) Cistern has a rectangular plan like a cathedral with a 143-meter width and 65-meter width. It has a capacity of storing 80.000 m3 water. What attracts is the number and size of giant columns supporting the skeleton. There is 336 huge columns built-in the Ionian or Corinthian style. There are 28 columns and 12 rows within the structure, thus it needs almost an hour to visit Basilica Cistern in a guided tour to explore all the details of it. Basilica Cistern Skip the Line Tour gives you all the hints of this exciting place.

Due to its mysterious atmosphere, Underground Cistern was used as a thriller platform for exciting movies such as From Russia with Love on the James Bond series in 1963 and Inferno starred by Tom Hanks in 2016. Another interesting feature is the myth of medusa head engravings. There are two mammoth medusa heads on the far corner of the building. One of them sits on its side and the female one stays upside down to lessen its power. According to the legend, Basilica Cistern Medusa Head was used as a frightening guard due to the mythical power to convert someone to stone if the person looks directly in its eyes.

Today, the museum is busy with tourist groups, travelers and concert organizations. Basilica Cistern opening and closing time are between 9 a.m and 6 p.m. at high season but it closes half an hour earlier during winter days. There is an entrance fee varying for local and foreign visitors, so you can check the most recent fee on how much it is to visit Basilica Cistern on istanbul.com website. You need to pay by cash on the spot, but it is better if you buy your Basilica Cistern online tickets earlier to your visit with a skip-the-line benefit.
​
If you plan to spend more time on the area, just get Basilica Cistern Museum Pass to see other attractions in a short track form, as well. Istanbul Tourist Pass which can also be used as Basilica Cistern Museum Pass allows you to take a fully guided tour in more than 30 different museums in Istanbul with no additional entry fee but including free extra services.

We spend 30 minutes inside with our guide. He mentioned about the Cistern s history. Tour might be more than thirty minutes. It was so crowded inside and dark. Everybody take pictures.

He was really a funny guy. Our guide. I never joined a tour in my travels like this. 30 minutes added my life hundreds laugh. Worth to visit.

So much mystic place. Like as so much dark. With my wife s wheelchair we could get in. Guide assisted us so much. Thank her.