The Architecture Of Hagia Sophia

Istanbul tourist pass will take you to one of the best and the most visited sights in istanbul. hagia sophia, which is considered to be a significant symbol of istanbul, has been standing strong for a very long time! located in the fatih district, which is filled with many historical architectures from different eras, hagia sophia is one of the most prominent and oldest architectures in different aspects.

Hagia Sophia was constructed in 325 A.D. at the request of the Roman emperor Constantine, who changed the capital of Byzantium to Istanbul, which was known as Constantinople, taking its name from Constantine I., the first ruler of the Byzantine Empire. Hagia Sophia, being a former Orthodox church, had undergone many alterations because of the fires. Before the 6th century, Hagia Sophia was burned two times and restored. And, after the 6th century, an earthquake happened, it destroyed the dome of the Hagia Sophia, thankfully it was a partial collapse. In 1204, Venetians and the Crusaders looted Hagia Sophia.

Hagia Sophia, which is getting stronger each time despite the fires and plundering, was taken by the Ottoman Empire in the conquest of Istanbul in 1453. Fatih Sultan Mehmed, who was the Sultan of Ottoman in the 15th century, commanded his soldiers to protect this marvelous architecture since Hagia Sophia, which was once a symbol of the power of Christians, was under the control of the Ottomans; it became the symbol of the conquest!

Since then, with its all glory and the noticeable architecture from the miles away, Hagia Sophia has been at the heart of Istanbul; it hosts different people from different cultures, religions, and nations; it has been one of the gorgeous attractions in Istanbul, offering its visitors a great chance to witness the harmony of its’ structure which includes Christian and Islamic features! 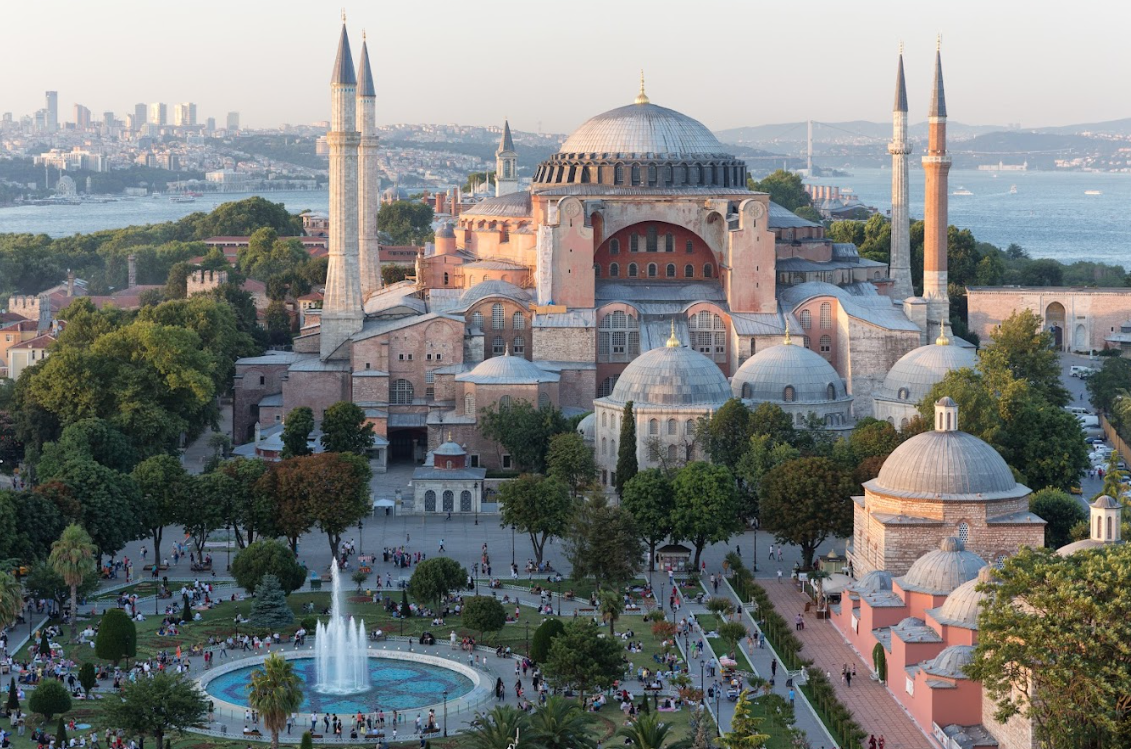 About Christian Architecture Of Hagia Sophia

Have you ever wondered why Hagia Sophia is so magnificent? The structure which has been standing at the heart of Istanbul has its greatness from its architecture. Constructed at the will of Constantine I. as a Christian basilica, Hagia Sophia has a central dome; it has semi-domes at east and west. Columns separate three aisles with galleries above and great marble piers rising at either end to support the dome. The columns are of the finest marble, selected for their color and variety, while the lower parts of the walls are also covered with marble slabs. The curtain walls (non-load-bearing exterior walls) above the galleries and the base of the dome are pierced by windows, which obscure the supports in the glare of daylight and give the impression that the canopy floats on air.

In the interior sight of Hagia Sophia, mosaics that demonstrate the tradition of early Byzantine in their color and technique show up. The preference for strong and clear tints and the turning of gold cubes will dazzle your eyes!

During your visit to Hagia Sophia, you will be seeing the distribution of pictures of Christ, the Virgin Mary, and Saints. In the apse of Hagia Sophia, Christ and Virgin Mary are depicted on a gold background.

On the nave walls, the drawings of saints are welcoming you. It is known that saints who are in the middle zone of the wall represent prophets. The ones on the lower part are holy bishops; those who are higher up are the guard of angels; in the center of the dome, it is thought to be the mosaic of Christ.

About Islamic Architecture Of Hagia Sophia

After the conquest of Istanbul in 1453, Mehmed the second gave Hagia Sophia a special value and respect; therefore, the Byzantine architecture was not destroyed. However, Hagia Sophia’s function was changed; it became a place of worship for Muslims. With the order of Fatih Sultan Mehmed, Hagia Sophia was transformed into a mosque. A wooden minaret was built; an altar and pulpit of Hagia Sophia were added. Fatih Sultan Mehmed added a library and madrasah as well.

In the northeast corner of Hagia Sophia, the son of Fatih Sultan Mehmed, Beyazıd II, added a white mihrab, a niche or chamber in a mosque indicating the direction of Mecca, and a minaret! Sultan Süleyman the Magnificent, who ruled the Ottoman Empire from 1520 to 1566, brought two lamps from Hungary to Hagia Sophia. During the reign of Sultan Selim, on the western side, two identical minarets were built. The famous Ottoman Architect Sinan added retaining structures and strengthened the Hagia Sophia.

In 1934, Mustafa Kemal Atatürk, the founder of the Republic of Turkey, secularized Hagia Sophia, and it was made into a museum in 1935. Furthermore, Hagia Sophia was declared as a UNESCO world heritage site in 1985. In 2020, Hagia Sophia was converted into a mosque where Muslims perform their religion. However, Hagia Sophia opens for the visitors as well.

Starting with visiting Hagia Sophia is always a good idea if it is your first time in Istanbul since it is the best place to stay in Istanbul! Istanbul Travel Guide and Istanbul Tourist Pass will give you the necessary information about the history and architecture of Hagia Sophia, so do not worry! Located in the Fatih district, where you can visit other important attractions, Hagia Sophia is standing face to face with the Blue Mosque of Sultanahmet, another tourist attraction and a must-see place in terms of its culture and history. Hagia Sophia is also neighboring Topkapi Palace, which was once home to all the Sultans of Ottoman. Hagia Sophia offers its visitors a great harmony of Islamic and Christian features in the aspect of its architecture and history!

During your visit to Hagia Sophia, the depictions of important holy people such as Christ, the Virgin Mary, and Prophets will immediately get your attention. In addition, while seeing these Christian properties, you will come across Islamic writings on the walls; you might encounter people who are performing their religion. It’s going to be a unique experience to visit Hagia Sophia, where different cultures and religions meet