Since 1997, Vogue Restaurant has been serving delicacies of world cuisine against the atmospheric backdrop of Istanbul’s most exquisite city-views. With its panoramic view of the Bosphorus and incomparable atmosphere, Vogue has been among Istanbul’s most select and cherished venues since the day of its opening.

The first choice for business entertaining, Vogue Restaurant presents a select menu of tastes from the world cuisine, including the flavors of the Mediterranean, over 70 varieties of sushi and a comprehensive wine list.

With Turkey’s first and only molecular cocktail menu, everyone who delights in discovering new and exquisite flavors can find the cocktail that best suits their individual palate.

Dolmabahce Palace & Two Continents tour is a great start to your vacation. In Dolmabache Palace & Two Continents tour, we welcome you to the recent residence of the Ottoman Dynasty and the royal family. Dolmabahce Palace was used as the main residence for running state affairs, it also served as the living place of the Sultan and the royal family from 1856 to 1887 and 1909 to 1922. It is the final Palace of the Ottoman Empire, ordered by Abdulmecid I. It took 13 years to build this breath-taking Palace and the construction cost was 35 tons of gold. In total, Dolmabahce Palace was home to 5 different sultans of the Ottoman Empire and Mustafa Kemal Ataturk, founder of the Turkish Republic, also lived and governed the Republic for a brief period, until he moved the capital to Ankara. This is also where Ataturk died in 1938 at 09.05, and in order to honor his memory, all clocks are stopped at 09.05 at Dolmabahce Palace. There you will also encounter the magnificent view of the Bosphorus and the Bosphorus Bridge. Next, we will go to Camlıca Hill, one of the seven hills of Istanbul. Camlıca hill offers a one in a lifetime opportunity to watch the sun go down over Bosphorus and Marmara Sea.

Then you can spend a nice day with Istanbul full-day old city tour. Moreover, you will be informed on history of the Byzantine Empire, which will connect the story of Istanbul. The tour starts with Roman Hippodrome, where the chariot races and occasional festivals were organized during Roman and Byzantine period. Then we will visit Blue Mosque, the iconic Ottoman mosque with 6 minarets. It was built between 1609 and 1616, during reign of Ahmed I, and consists the symbolic tomb of him, a madrasa and a hospice. It is still actively used as a Mosque today, allowing you to pray in the same place where countless Sultans have prayed for hundreds of years. Next we will see the German fountain, gift of Kaiser Wilhelm 2 to Sultan Abdulhamid II. Then, we will visit Hagia Sophia, which is also known as the Church of Divine Wisdom, served as a church for Byzantines for 916 years until Fatih the conqueror conquered Istanbul, he converted this magnificent building into a mosque and it served as a mosque for 482, until Ataturk and the council decided to convert it into a museum in 1935. Before lunch break at a local Turkish restaurant, we will visit Grand Bazaar, where we will explore examples of Turkish handcrafted products ranging from carpets to leather jacket and many souvenirs.

After lunch break, our tour will continue with visit to Topkapi Palace. Topkapi Palace is one of the most visited museums of Istanbul and it contains many collections such as Imperial Treasury, where you will encounter couple of most beautiful jewelries of the world, portraits of the Sultans, Holy relics, silverware and glassware from Byzantine, Ottoman empire and many gifted silverware from all around the world. Our next stop is the outside of Hagia Irene Church, located in the outer courtyard of the Topkapi Palace. The tour ends with visit to  Caferaga Medresseh, which was built in 1559 by world known architect Mimar Sinan on the orders of Cafer Aga, during the period of Suleiman the Magnificent, and lastly we will walk around Sogukcesme street, a historic street in Blue Mosque neighborhood, a car free zone with beautiful historic houses.

At Vogue Restaurant, meals, served in a chic and minimalist atmosphere accompanied by the paintings of well-known Turkish contemporary artists, are a feast for the eyes.
An Istanbul classic for 14 years and a favorite of Turkish and foreign guests, Vogue Restaurant has been named by Zagat Survey as one of the best restaurants in the world. 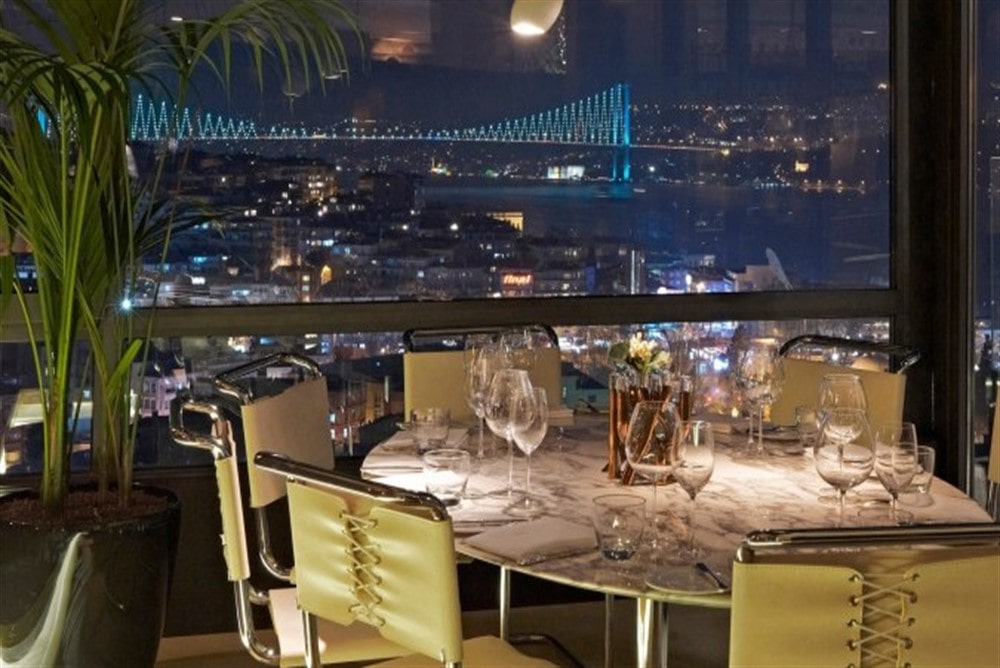 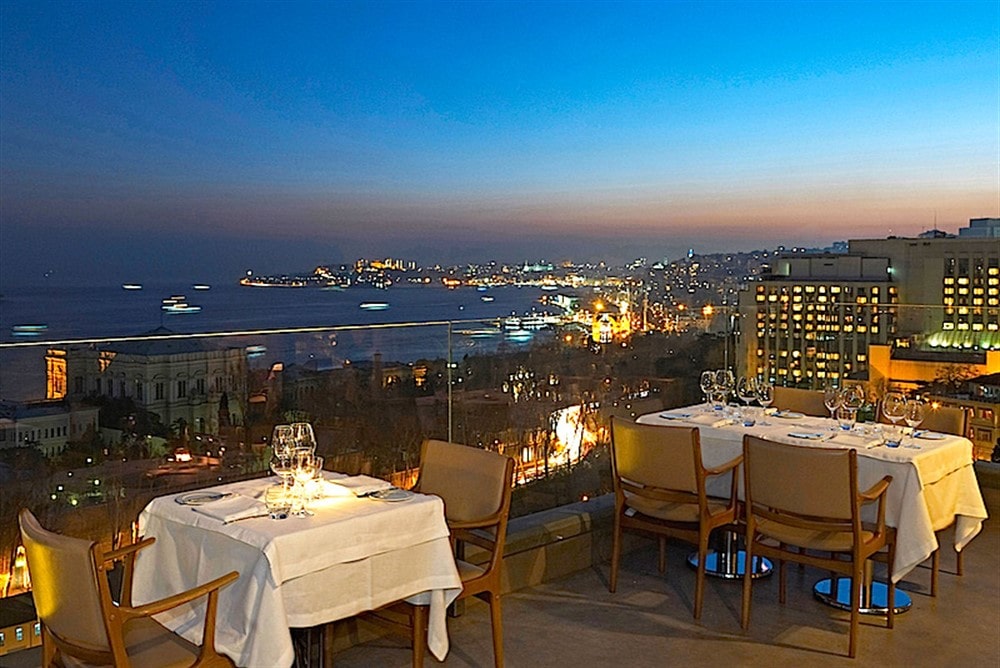 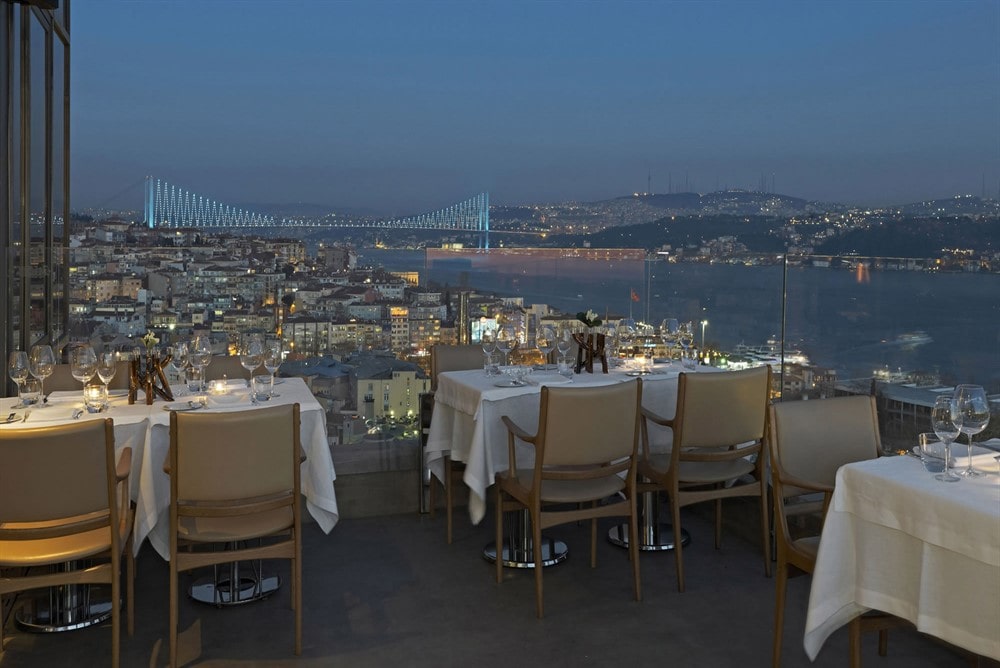 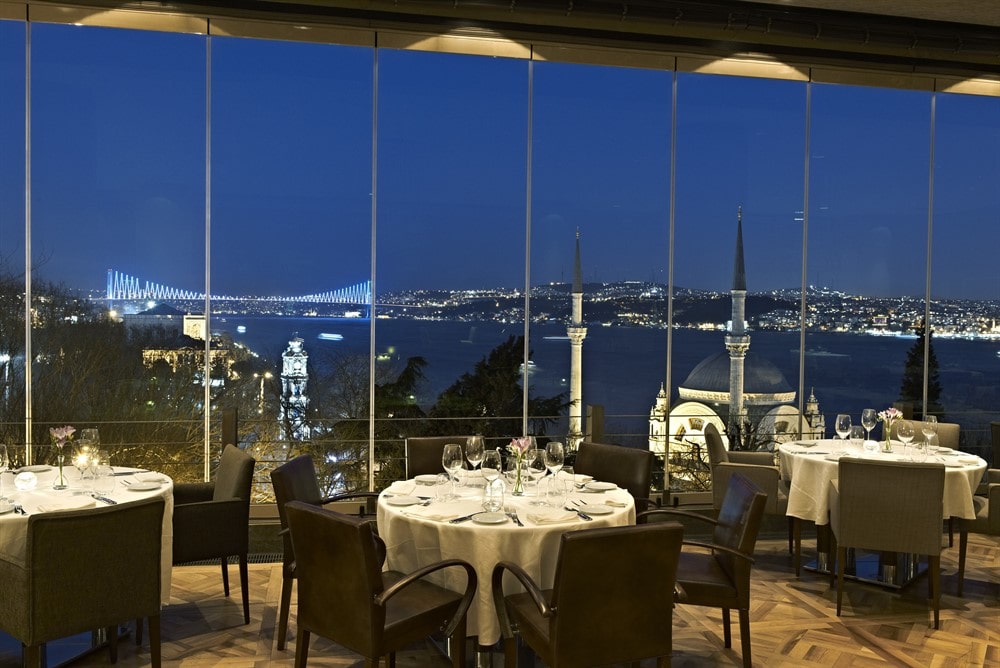