The Valens Aqueduct is 971 meters long, with a peak height of about 29 meters. It is not an entirely straight and regular structure because some of its components were reconstructed at various points throughout time. In contrast, the arches between 41 and 45 and 52 to 56 were rebuilt during the reigns of Mustafa II and Suleyman I, respectively. As can be seen, the arches between 1 - 40 (including 1 and 40) and 46 - 51 have remained unchanged from the time of Emperor Valens.

Uncertain circumstances surround how the bent section near the Fatih Mosque got to be that way, which attracts particular notice. Even though its stonework appears to be nearly flawlessly regular from a distance, closer examination reveals that ashlar blocks and bricks were combined to build it.

The aqueduct's breadth is also asymmetrical, with its largest point measuring 8.24 meters and its narrowest at 7.75 meters. The pillars are 3.70 meters thick and currently extend 6 meters below the surface.

Where Is The Valens Aqueduct? 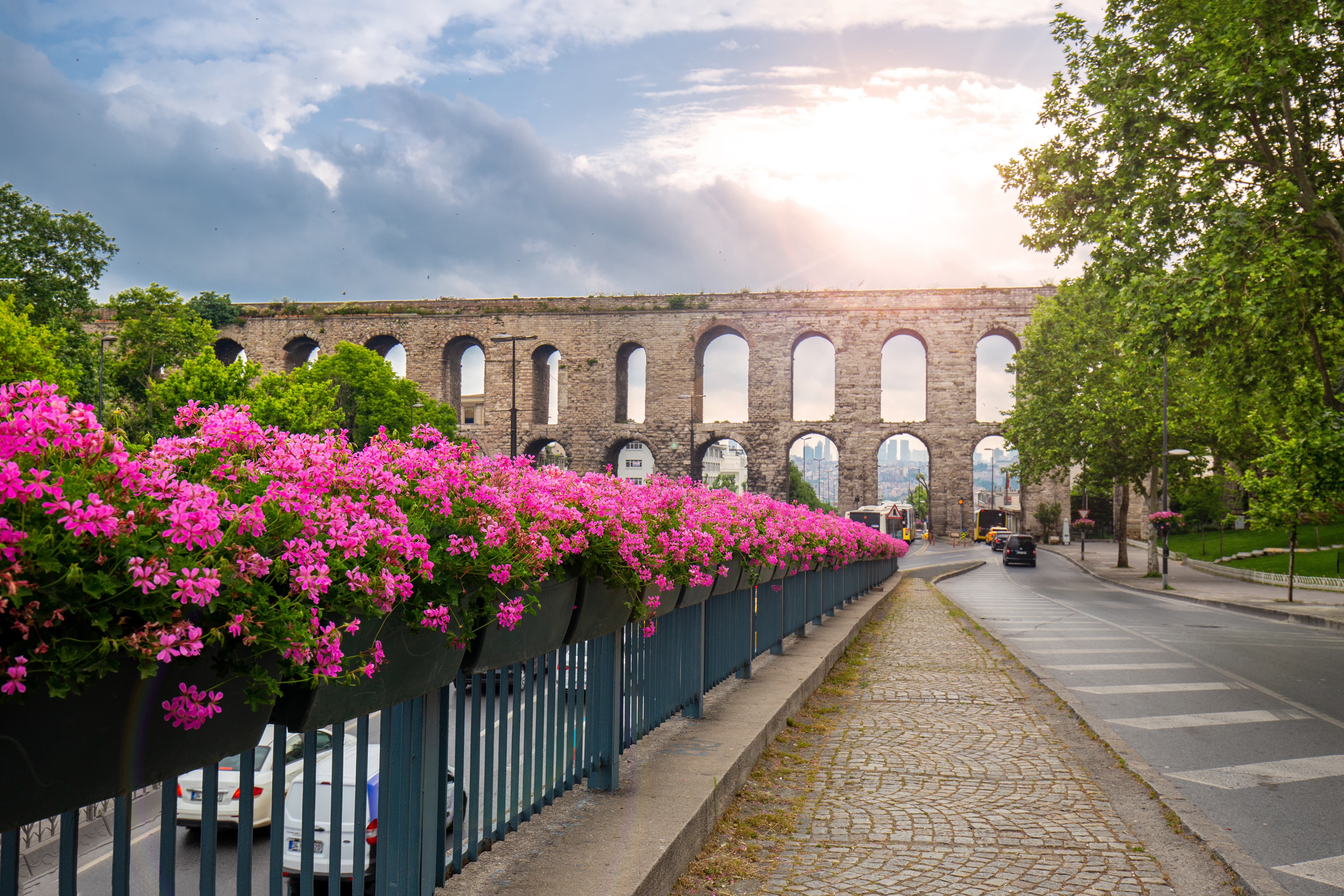 Sarachane Park and the Aqueduct of Valens Istanbul are both in Istanbul's Fatih neighborhood. Simply board the M2 Yenikapi-Hacisman metro line and exit at the Vezneciler - Istanbul University stop to use the metro. The distance to the aqueduct from there is 10 minutes by foot.

You can take the Marmaray from Istanbul's Anatolian side and change to the M2 Yenikapi - Haciosman metro line at the Yenikapi stop.

Other Attractions Near The Valens Aqueduct

The location of Valens Aqueduct in Fatih offers visitors a wealth of additional locations to discover. Join a Best of Istanbul Tour to experience the best that this enchanted city has to offer. It is even safe to argue that Fatih offers some of Istanbul's best attractions.

Your journey will get underway at Istanbul's top tourist destination, the Hagia Sophia Museum. You will be able to skip the wait and see this important architectural landmark for yourself. With a history spanning more than 15 centuries, this museum has carried a tremendous amount of history on its shoulders as both a Greek Orthodox Christian patriarchal cathedral and an Ottoman imperial mosque.

Next, you will find Basilica Cistern, the city's largest ancient subterranean cistern. Considering that this enormous historical cistern was constructed in the sixth century, it has been providing Istanbul with water for more than 15 centuries. Inside, you'll find a space with more than 300 marble columns that appear to go on forever.

Your next stop will be Topkapi Palace, which is the second most popular tourist destination in Istanbul. One of the most significant structures in Ottoman history, the imperial palace housed numerous sultans and their families for more than four centuries.

You can see a live performance of the Whirling Dervishes, another representation of Turkey, in Hodjapasha. You will be spellbound by the enchanting ceremony performed by the Whirling Dervishes of the Mevlevi Order, one of the most significant cultural activities in the world according to UNESCO. Understanding the significance of each individual's gesture and attire is only one more aspect of this experience

Istanbul Theodosian Walls are the defenses that have protected Istanbul, once known as constantinople, for thousands of years and have witnessed much of the city's history. the surrounding walls of istanbul are more artistically attractive than other wall constructions from the middle ages. they are exceptional illustrations of how roman city engineers and soldiers collaborated. even some researchers claim that the walls are more useful than the great wall of china. building walls entails establishing the land's boundaries. they contribute to the final forming of the city. istanbul's current map was created by theodosian walls.

View All
Long Layover In Istanbul

The various options Istanbul’s nightlife has to offer may shock you. But without getting lost, check out the city's nightlife explained district by dıstrıct below. You might need a guide before you choose how to spend the night and here it is.