Set in the historic city center, this polished hotel is a 7-minute walk from a tram stop, 1 km from the 17th-century Blue Mosque and 3 km from the rooftop restaurant at the Galata Tower. Offering free Wi-Fi, the elegant rooms also have flat-screen TVs, and tea and coffeemaking facilities. Upgraded quarters add whirlpool tubs; some feature living rooms. Suites provide in-room Jacuzzis. Breakfast is complimentary. There's also a chic restaurant, as well as a relaxed cafe/bar. A sophisticated spa features a hammam, a sauna, an indoor pool and a fitness room.

Managed to get in to top best %9 hotels in Istanbul, Levni Hotel provides a soothing and comfortable backdrop for your trip in Istanbul.

The hotel has variety of rooms for you to choose among, including standard and deluxe rooms with family options, duplex rooms, suites and handicap rooms. All of the rooms comes with free Wi-Fi, flat-screen TVs, and tea and coffee making machines. Upgraded rooms include whirlpool tubs, some featuring living rooms within. Suites include in-room jacuzzis!

Most remarkable thing about the hotel though, is its extensive and magical spa where you’ll forget all your problems. It includes massage wellbeing treatments, face treatments, a traditional Turkish bath, body treatments and various massage packages for you to choose! In addition to the treatments, there are a sauna, indoor swimming pool, and a fitness room. Every corner of the spa is tastefully designed and furnished in order to enhance your soothing experience, especially the Turkish bath reflects every traditional detail.

The hotel’s location adds up to this beautiful vibe it reflects. It is 45 km from the Istanbul Airport, 750 m from Sultanahmet Square, 2,3 km from famous Blue Mosque, and only 650 m from Taksim Square.

Relax your body after a day of exploring the magical Old City of Istanbul! Discover the rich hybrid of two distinct cultures, Ottoman and Byzantine Empires.

Old City is a magical place where remaining treasures of two great empires, Ottoman and Byzantine, combines together.

This tour will explore the places through which you can explore this enchanting combination.

Hagia Sophia, originally a church that is built three times in its history. Lastly, it was built during Emperor Justinian’s reign and had reached to present day with some renovations. After the conquest of Istanbul, it has been converted into a mosque, now it is being used as a museum. There you can see the blend of these two cultures in a single building. Its four minarets were added by four different Ottoman Sultans.

Neighbor to St. Sophia, you’ll be seeing Sultan Ahmet Mosque, or mostly known as the Blue Mosque due to its famous blue Iznik tiles. It has six minarets in total, according to a myth it is by accident: Sultan asked for gold (in Turkish Altın) minarets, but the architect misunderstood it as six (in Turkish Altı), thus he built all six of them.

Next to the Blue Mosque, you’ll be seeing Hippodrome, or the remaining of it since Byzantine times. Now you can see the Serpentine Column, Obelisk of Theodosius and German Fountain of Wilhelm II within the same area.

Then you’ll be moving towards Grand Bazaar, to fill your packs with many beautiful things for yourself and your loved ones!

After having your lunch at a local Turkish restaurant, you’ll have a glimpse into Ottoman Family residence, seeing the imperial treasury, sacred Islamic relics of Prophet Mohammed, the kitchen, porcelain and weapon collections.

If you’d like to explore the rich history of Istanbul that brings together Ottoman and Byzantine empires, you should definitely hop in to this tour! When you are done and dusted, Levni Hotel will be waiting for you to relax in with its amazing spa centre. 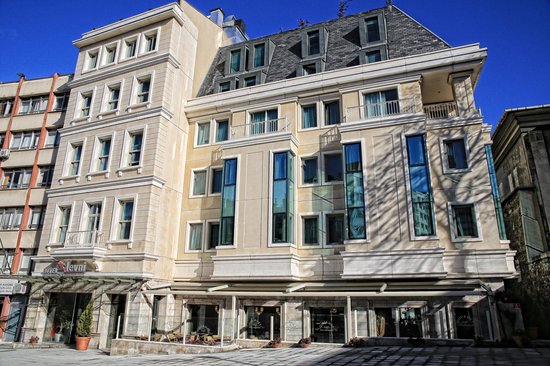