The most unique experience that you can have in Istanbul would be staying in an Imperial Palace, only palace that has been turned into a Hotel on the Bosphorus. You’ll be experiencing Istanbul at its grandest in there. Çırağan Palace Kempinski is designed attentively to preserve and reflect the ultimate luxury of a genuine Ottoman Palace, deserving every one of that five stars to the fullest.

The hotel offers a total of 313 rooms, 280 of them being rooms and 20 suites with a choice of breathtaking view of Bosphorus, at an amazing proximity. The Imperial Palace offers eight restaurants and bars in your service, and is also regarded as the city’s most distinguished place for high profile meetings & congresses for private companies, extravagant weddings and special occasions that would create unforgettable memories.

In addition to these, Çırağan Palace Kempinski offers a luxurious Spa and Wellness Centre, including authentic Turkish baths where you can have traditional Turkish massage and bath. The centre includes a fitness centre, a whirlpool, an indoor swimming pool, sauna and steam rooms, massage rooms and a cosmetic room. An all-time favorite is the winter heated infinity outdoor swimming pool, for you to float on the Bosphorus.

Want to continue with exploring the magnificent history of the Ottoman Era? You are invited to explore Treasures of Ottoman Empire with this extensive tour!

The tour begins with Süleymaniye Mosque, a mosque that is built by imperial architect ‘Mimar Sinan’ by the order of Süleyman the Magnificent. Some scholars say that the grand mosque is there to represent the Süleyman’s historical importance, and to assert him as the ‘second Solomon’. Its minarets said to shine on sunrises and sunsets, thus endowed with the name Cevahir (Jewelry) Minaret. The mosque itself reflects the diverse history Istanbul encompasses, with its baptist pools in its gardens, showing the multicultural nature of Süleyman’s Ottoman. The Sultan’s and his famous wife Hürrem Sultan’s tombs are right next to the mosque.

After that, the tour will go on to Blue Mosque, neighboring Hagia Sophia, the mosque is famous for its blue Iznik tiles, built in the name of Sultan Ahmet.The mosque is still on use, so it can be visited except fo Friday during praying times, imagine exploring such historical sight that still serves for the same purpose!

Then, the tour will present history that Istanbul is built upon, by visiting the Hippodrome. Even though we can only see a small piece of it, you can explore the Byzantine soul reflected through it, and imagine how it was used as an arena of social gatherings such as sport vents and political activities. You’ll also be seeing monuments from Byzantine period such as Serpentine Column, Obelisk of Theodosius and German Foundation of Wilhelm II.

After the places where you can taste the history from a first hand experience, you will also be seeing a collection of valuable artifacts in Turkish and Islamic Art Museum located just over the Hippodrome area. The museum was originally the residence of Ibrahim Pasha, who was one of the mightiest vizier of Ottoman Empire and the son-in law of Sultan Süleyman. The museum contains beautiful Quran samples, marvelous carpet collection and many more Islamic Art samples.

After having your lunch in a local Turkish restaurant, you’ll be moving on towards Yıldız Palace, a dazzling palace with mesmerizing view of Bosphorus. The palace was in use as the 4th administration centre of Ottoman Empire following after Old Palace, Topkapı Palace and Dolmabahçe Palace. You can have amazing pictures with magical view of colorful flowers surrounding the Yıldız Palace!

At the end, you’ll have some free time for a tea break at the Sale Kiosk, the residence for Sultans.

If you would like to treat yourself like a Sultan more, you can join an Ottoman cuisine tasting as well.

The Turkish and Ottoman cuisine is considered as one of the best cuisines in the world which combines Anatolian and Middle Eastern tastes. One of the unique characteristics of Ottoman Empire is that they tried to preserve the culture within the lands they have conquered, instead of forcing for assimilation, they attempted to synthesize newly encountered cultures with their own. The same thing is valid for cuisine as well, so Ottoman cuisine can be said to reflect the very diverse and dynamic cultural nature of the empire.

If you’d like to capture the zeitgeist of living in 15th or 16th century (in a palace of course) in the most delicious way, you will love this three course menu that will project you way back into history:

You’ll begin with soup; you’ll have Almond Soup Festive Dish, made out of milk, butter, sweet and bitter almonds with ground nutmeg and pomegranate seeds.

For appetizers you’ll be having Ottoman Hummus, a tasty meze made from mashed chickpeas, tahini and olive oil with cumin. Together with Spinach Piruhi, hıme made ravioli stuffed with spinach and an assortment of cheese, and Cheese Pie, thin sheets of pastry rolled with six kind of cheese and peas, fried and served with honey.

And for the main course: You’ll be having delicious Goose Kebab, shredded goose meat rolled and baked with rice in a sheet of pastry (which is a palace recipe dates back to Mehmet the Conquerer’s reign) or Lamb Shank with “keşkek”, a side dish made of boiled wheat marinated with butter.

For desserts, you’ll of course be having Baklava, beautiful traditional Ottoman dessert, after baked a sweet syrup is immediately poured over the pieces, going deep into the layers. This beauty dates back to 14th century.

With these, you’ll be having house wine, or 2 cups of beer, or 3 soft beverages.

Çırağan Palace offers a remarkable experience in Istanbul, where you can explore the residues of a once-great empire, in style and luxury. 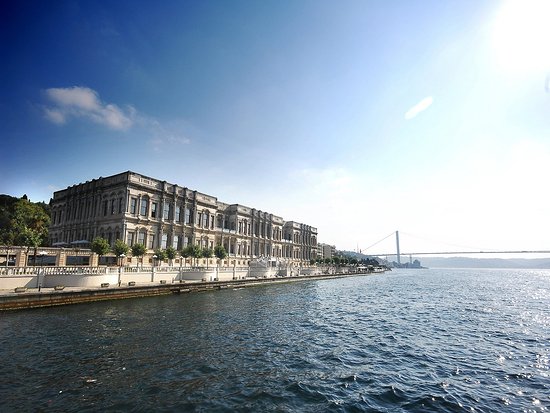