In the anatolian neighborhood of istanbul, next to kadiköy, is the renowned high street known as bagdat caddesi (avenue). it is 14 kilometers long. it practically parallels the sea of marmara in kadiköy's maltepe neighborhood. the 6 km long, one-way section of the street that runs from bostancı to kzltoprak is considered to be of equal importance to taksim's istiklal street in terms of glitz and glitter. you can take a dolmuş (mini-bus) that departs from şli and travels directly to bagdat street, or you can take the m2 metro line from taksim square to the marmaray train line, which departs and arrives near bostanc.

What And Where To Eat In Bagdat Street?

The first place that comes highly recommended is Mandela Street Food Bar, which is known for its delicious and outstanding burgers. The meal menu is really good, including anything from incredible avocado toast to omelets, pancakes, different kinds of burgers, tacos, and vegetarian options. The restaurant serves a variety of beer, tea, and Turkish coffee species, as well as various vodka varieties, wines, and vibrant cocktails. The bar menu is also excellent. A very good wonderful highly recommended restaurant in Bagdat Street, Mandela Restaurant's price can vary depending on your objectives but, on average, it costs about 180 T.L for two people (including drinks).

Second, Vapiano is an Italian pizzeria that is highly regarded and has a lot of views for pizza enthusiasts. Pizza varieties and extras are abundant on the menu, and the bar menu is exquisite as well, featuring red wine and white beverages. a delicious meal and a fantastic combination. The typical price for two people, including drinks, is roughly 200 TL.

The third restaurant is Happy Moon's, which is around 15 minutes walk from Bagdat Avenue and is a great place with many options (Turkish Breakfast, seashore view, car park, Full bar, and an outside area). If two persons wish to purchase alcoholic beverages, the average cost is around 210 TL. 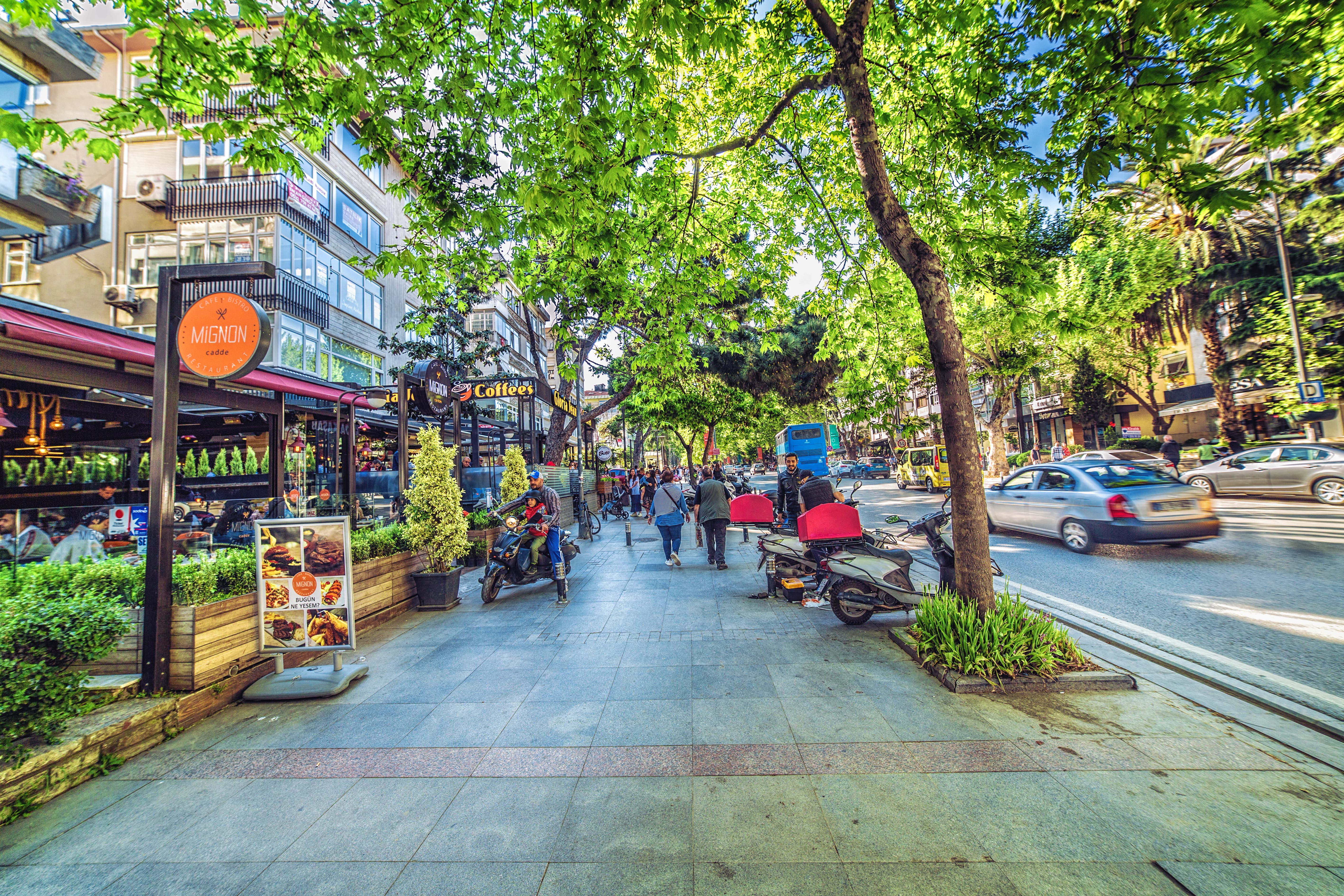 What To Do In And Around Bagdat Avenue (Bagdat Street)?

It is nearly difficult to be in Bagdat Street on the Anatolian side without walking to Maltepe Seashore. Bagdat Avenue is approximately 7 minutes away from the coastline, where you can go to watch the sunset and enjoy some soft drinks.

Maltepe Park Retail Center is another very sizable shopping complex. It comprises 240 shops, 36 restaurants and cafés, a sizable Carrefour hypermarket, a movie theater, and a sizable car park that can hold about 3500 vehicles. Maltepe Park Shopping Center frequently hosts events including kid-friendly theater shows every Saturday, kid-friendly entertainment shows every Sunday and food festivals. Therefore, think about parking your car at the large mall first before heading to Bagdat Street to have a leisurely stroll and select a restaurant to enjoy your supper at

Through the avenue, it is possible to find the shops of almost all popular brands such as Zara, Louis Vuitton, Tommy Hilfiger, or Barbour. In the part between Erenköy-Suadiye, there are dozens of famous cloth, jewelry and cosmetics shops one after another. Although the number of the “haute couture” boutiques here is not as much as the ones in Nişantaşı, except for a couple of examples near Erenköy. Hundred thousands of people are still attracted to this place for its multistorey stores such as Boyner and YKM and for dozens of small shops selling various products imported from outside the country. If you have a look at the shops on the back streets, you can have infinite shopping choices appropriate for almost all budgets on Baghdad Avenue.

The fashion trends are closely followed up in Baghdad Avenue and you can come across highly elegant people on this avenue. In Baghdad Avenue, where the people who love shopping never want to leave because of its luxurious stores, decent cafes and pleasant atmosphere, you can also find the big branches of the famous hairdressers and beauty centers such as Tony&Guy, Erdem Kıramer and Ebil. Moreover, you can take break in one of the dozens of classy cafes or restaurants such as Starbucks, Divan, Kırıntı along the avenue after shopping for hours.

If you plan to see Baghdad Avenue and shop for hours you should check out the near by hotels when you plan your trip to Istanbul.

Bagdat Caddesi, commonly known as Bagdat Caddesi, is an upper-class residential neighborhood. Bagdat Street is renowned for its affluent and elegant boutiques that include both local and international designer labels. Bagdat Street is lined with retail malls, department shops, and gourmet and ethnic restaurants from across the world. There’s something for everyone’s palate!

There are also several cafés and bars for people who want a more relaxed atmosphere. The majority of the shops that line Bagdat Street are open nearly every day, giving tourists and delighted customers the opportunity to broaden their purchasing choices. Even on Sunday afternoons, when most businesses are closed, some shops and stores are open. Bagdat Street is a 6-kilometer length that runs nearly parallel to the Sea of Marmara’s shoreline. After even a little period of pavement surrounding the roadway, there is simple access to transit.

Where Is Bagdat Avenue?

Bagdat Street is in Maltepe, and the name “Bagdat” is derived from the Arabic term “Baghdad.” The avenue is a one-way street and may be regarded as the Turkish equivalent of Istiklal Avenue, which is on the European side in terms of significance and high standards. The avenue is usually bustling and full of activity being the major thoroughfare in an upper-scale residential neighborhood, even on weekdays, but the weekend certainly stands out as the most fashionable and energy-filled environment.

Despite being urban and contemporary, the avenue is lined with ancient plane trees that border the beautiful stores that sell the greatest world-renowned brands, as well as some of the top restaurants that provide the best cuisine. The road is also home to some of the finest luxury automobile dealerships and banking institutions. The avenue is also known as a huge open-air shopping mall, so discounts and haggling are just the icing on the cake for those who like shopping till they drop.

During the Byzantine and Ottoman eras, Bagdat Street served as a transportation link between Constantinople and Anatolia. The route, which was utilized for commerce and military reasons, was named after Baghdad when Sultan Murad IV conquered the city in 1638. For visitors coming or leaving from the city, fountains and prayer spots were constructed along the route during the Ottoman period.

When Sultan Abdul Hamid II came to power, several Pashas, senior officials, and rich merchants purchased property parcels along the road to be near to the palace. Luxury wooden chalet homes were built on these sites, and several are still standing today. Prior to the outbreak of World War I, the Boulevard was cobblestone-paved, and carriages were utilized for transportation. The region surrounding the avenue was utilized as a summer retreat by the city’s affluent families until the 1960s. Following the construction of the Bosphorus Bridge, these low-rise summerhouses were demolished and replaced with high-rise condominiums.

Today, the Boulevard serves as a gathering place for people celebrating a sporting event or a national holiday on Istanbul’s Asian side. There is a lot of singing, dancing, driving, and honking of vehicle horns. Visit the restaurants and many attractions on Bagdat Caddesi, and you’ll be very fulfilled with food -and culture!

How can I use the metro to go to Bagdat Street?
I advise you to take the Metro to Suadiye, which is at the upper end and then veer back toward the busiest and main shopping area of the Caddesi.
How to go from Sultan Ahmet to Bagdat Street
On the Asian side. You can use a taxi or public transportation.
What is the location of Bagdat Street?
The primary shopping district of Istanbul's Asian side is located there.