A Church in Buyukada

Set sail across the Marmara Sea to visit the Princes' Islands and explore Buyukada on a horse and carriage! ...

Sail to the Sea of Maramara and visit the largest of the Princes' Islands. Learn about its interesting history and admire its natural beauty....

Set sail on an adventure to the Sea of Marmara to experience the natural beauty of the Princes' Islands. ...

No Istanbul trip is complete without a Princes’ Islands trip, and no Princes’ Islands trip is complete without a Buyukada trip. This beautiful island of Istanbul has much to offer to tourists, but one of the most beautiful, stunning and culturally-significant places you can visit is the Aya Yorgi Church. This important historical monument is a great place to watch the view, enjoy some drinks and witness the history. If you are interested, let’s go into more detail about Aya Yorgi Church Buyukada. 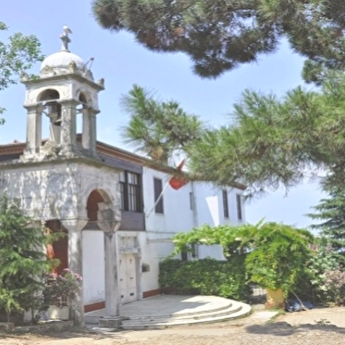 According to the information on the Patriarchate records, Aya Yorgi Church was constructed in 1751. The small two-story building covered with tiles is known as the old church and has a small church, chapel and a prayer place. Aya Yorgi Church, on the other hand, is the new building on the hill that was built of face stone in 1905 and opened for use in 1909.
The church got its name from Aya Yorgos (Saint George), who started being referred to as Aya Yorgi by the Greeks over time. He was a soldier in Cappadocia that lived in the 3rd century. He is one of the most known and loved saints and martyrs in Christianity. According to the legend, the people in the city were troubled by a murderous dragon. They gave the dragon sheep, but the dragon wasn’t satisfied. They started choosing people from the city randomly to be sacrificed to the dragon. One time, the king’s daughter was chosen. Despite the king’s offerings, no one accepted to take his daughter’s place. As she was about to be eaten by the dragon, Saint George arrived and gravely wounded the dragon. He put a girdle around the dragon’s head and led it back to the city. The king and the townspeople were amazed. He offered to kill the dragon if they all became Christians. More than 15,000 people and the king became Christians, and Saint George killed the dragon.
Every year on April 23 and September 24, huge crowds of Christians come to Aya Yorgi Church. It is accepted as one of the two pilgrimage points of Christians, besides the House of the Virgin Mary in Ephesus.
But why the 23 April and 24 September dates? In the Orthodox sect, April 23 is the St. George’s day. September 24 is the commemoration day of Aya Thekla, who devoted herself to the new religion of Jesus' apostle Paulus.
Those who come to Aya Yorgi Church come to pray and make a wish. They take off their shoes at the start of the road that leads to the church, grab a bell and never speak during the entire road. It is also believed that the wishes of those who tie ropes to the bushes and walk the road with a reel rope will come true. This uphill road is also known as the “path of torment”. This tradition is based on a religious story. According to this story, during the Byzantine era, the island was under the siege of the Greeks. The priests wanted to save the icons and sacred objects in the church of Aya Yorgi, so they buried the objects in the ground. After many years, a shepherd in the island saw Aya Yorgi in his dream. In his dream, Aya Yorgi told the shepherd to climb the road that leads to the church and stop and dig when he hears bell sounds. After this dream repeated itself for a couple of days, the shepherd climbed the road to the church barefoot and never spoke along the way. When he got to the church, he heard bell sounds like Aya Yorgi said in his dream. He began digging and found the unscathed icons and the sacred objects buried in the ground. It is believed that those who manage to climb the “path of torment” barefoot without speaking are half-pilgrims.


Inside the Aya Yorgi Church

You will meet a lot of different people along the way, especially if you visit the church on 23 April or 24 September. People from different religions and nationalities come together to pray, meet each other and spend a good time. Even if you are not religious, it is hard to not get lost in the atmosphere of this place.
After a 15-minute long walk, you will arrive at the Buyukada Aya Yorgi Church. A sign on the front door reminds you to be silent and dress appropriately. Even though the church is not that big, there are many amazing icons, motifs, paintings and religious monuments to be seen. The one that draws the most attention is the icon that shows Aya Yorgi killing the monster that’s coming out of the sea with his spear. Aya Yorgi’s own icon also attracts a lot of attention. People leave many different gifts like flowers in front of this icon to thank Aya Yorgi.
Outside of the church, you will be mesmerized by the gorgeous view of the Marmara Sea. The main attraction here is the café that is next to the church, Yucetepe Kır Gazinosu. It is run by a local Turkish family and serves great food, along with one of the best views you can have in Istanbul.


How to Go to the Aya Yogi Church

You first have to go to Buyukada. Since the island is a pretty popular place, there are ferries that go there from many different stations across Istanbul, such as Besiktas, Bostancı, Sirkeci, Kartal, Buyuk Cekmece, Bakırkoy, Eminonu, Kadıkoy, Kabatas, Yalova, Avcılar, Karakoy and Yesilkoy.
After you get to Buyukada, you will have to hire a bicycle to get to the church. Since it is on the highest hill on the island, almost every local knows its location, so you can ask around to find your way, if you don’t have an princes islands tour guide.
You can visit the Aya Yogi Church every day of the week between 8.30 AM and 4 PM, except for Sundays between 9 AM and 12.15 PM, since it is the time of worship. The entrance to the church is also free for everyone.

If Istanbul is summer, islands are lemonade. :)

We visited the Biggest Island. In terms of its dimension it is named as Big Island. I had a visit 15 years before and here was like a summery region. But now like a small Istanbul. As i checked the previously comment, even if they reflect the past, please do not take any phaeton.

It was so funny to journey with horses. But i think they are not feeded and taken care well. :/

Worth to visit on nice wheather. Not a long way but it takes more than 1 hour. I do not suggest to visit on weekends due to it is so crowded. Poor horses. :(

I can have a house and live in this Island 12 month. There was just one scary place on the top of the island. As i learnt from our guide it was used as a Greek Orphanage. But now it is empthy. A ghost apartment.

We had a long Turkey trip and were spending 5 days in Istanbul. Islands side regenerated us. Wheather, sea, forest… We can continue 5 days more.