Day 1 - Istanbul - Arrival Day – Friday
Upon your arrival in Istanbul, you will be met at the airport and transferred to your hotel. For the rest of the day, you will be free to explore on your own. In the evening, enjoy a welcome dinner of delicious and authentic Turkish food. Accommodation for the night will be in Istanbul.

Day 2 - Istanbul City Tour – Saturday
After breakfast, your guide will meet you in your hotel lobby at 8:30 am. The first stop of the day will be Topkapi Palace, the residence of the Sultans and their families between the 15th and 19th centuries. The next stop will be the Blue Mosque which is the only mosque with six minarets. Its name comes from the beautiful, blue ceramic tiles that line the interior. Just outside the Blue Mosque is the Hippodrome which was the social and entertainment hub of the city during the Byzantine period. The last stop of the day will be to the Spice Bazaar, or Egyptian Market, where you can browse and breath in the delicious aromas of the spices, teas and fresh produce sold there. In the evening, dinner will be served at an authentic Turkish restaurant. Accommodation for the night will be in Istanbul.

Day 3 - Istanbul Bosphorus Cruise and Flight to Izmir / Kusadasi - Monday
After breakfast, meet your guide in your hotel lobby at 8:30 am. The adventure of the day is going to be a Bosphorus cruise! Sit back and relax as you cruise between the continents of Europe and Asia. There is so much to see along the Bosphorus including Ottoman mansions, palaces, mosques, fortresses and bridges. After lunch, you will be transferred to the airport for your flight to Izmir. Upon your arrival in Izmir, you will be transferred to your hotel. Dinner and accommodation for the night will be in Kusadasi.

Day 4 - Kusadasi - Ephesus Tour - Turkish Village Sirince - Tuesday
After breakfast, you will meet your guide in your hotel lobby at 8:30 am. The first stop of the day will be the ruins of the ancient city of Ephesus, one of the great cities of the ancient world. In Ephesus, you'll see the Temple of the Artemis, one of the Seven Wonders of the Ancient World, the great Celcus Library and Roman baths. When we've finished exploring, we will see a Turkish arts and handicraft demonstration. The next stop will be Sirince Village which is famous for its vineyards. We'll get to try a variety of their famous fruit wines! Our final stop will be to a leather workshop and then we'll head back to your accommodation in Kusadasi.

Day 5 - Kusadasi - Pamukkale Tour – Wednesday
After breakfast, we will head to Pamukkale. After check-in and a lunch break at the hotel, we will visit the Ancient City of Hierapolis which was once the most important religious centre of the ancient world. Then we'll head to Pamukkale and see the beautiful, thermal water terraces called travertines. Your accommodation for the night will be in Pamukkale.

Day 6 - Pamukkale to Antalya – Thursday
After breakfast, we will depart for Antalya at 10:00 am. After checking-in at your hotel, you will have the rest of the day free to explore on your own. Accommodation for the night will be in Antalya.

Day 7 - Antalya Old City Tour and Waterfalls – Friday
After breakfast, at 8:30 am, we will visit the ancient harbour of Antalya. The Old Town of Antalya is known as "Kaleici" and one of its most famous historical sights is Hadrian’s Gate, built in 130 AD to commemorate Emperor Hadrian’s visit to the city. It is surprisingly well-preserved. You'll also see the Broken Minarets Mosque which has an amazing history. It was first a Roman Temple in the 2nd century, then a church in the 600s, was converted to a mosque during the Seljuk Empire, converted back to a church when the King of Cyprus took the city in 1361, converted yet again to a mosque under the Ottomans and then was tragically destroyed by fire in 1846. Today, the building is in ruins and all that remains is one broken minaret. What a history! After lunch, we will see the Duden Waterfalls, a beautiful natural wonder, and take time to relax by its calming waters. Accommodation for the night will be in Antalya.

Day 8 - Antalya - Konya – Cappadocia – Saturday
After an early breakfast, we will head to Konya at 8:00 am. When we arrive, we'll have lunch and then visit the Tomb of Mevlana Jelaleddin Rumi, the founder of the Mevlevi sect of Dervishes. In the late afternoon, we will drive to Cappadocia and your accommodation for the night will be in Cappadocia.

Day 9 - Cappadocia Underground City & Goreme Open Air Museum – Sunday
In the morning, you will be picked up at approximately 9:30 am from your hotel and driven to Ozkonak Underground City, one of the best-preserved underground cities in Cappadocia. The next stop will be Uchisar Castle, the highest point in Cappadocia where you can enjoy amazing views of the unique landscape. Then, we'll continue to Goreme Open Air Museum, the heart of Cappadocia. Goreme Open Air Museum is famous for its frescoes which date back to the 10th century and depict the life of Jesus Christ. The next stop will be Cavusin, which is an abandoned village with old cave houses and an amazing church of St John the Baptist. Then it will be time for lunch at Avanos restaurant. After lunch, we'll visit a pottery workshop where you can have a go at making something yourself! Then we'll continue to Pasabagi where you can see three-headed fairy chimneys. After Pasabagi, we'll join another workshop to see handwoven carpets and kilims. This area is particularly well-known for its beautiful Turkish carpets. The final stop will be Devrent Valley, also called Imagination Valley, to see unique rock formations and fairy chimneys. Accommodation for the night will be in Cappadocia.

Day 10 - Cappadocia to Istanbul - End of Tour - Monday
After breakfast, you will have free time to explore the area on your own. Then, when it is time, you will be driven to the airport for your return flight to Istanbul.

We hope you have an amazing and memorable trip and thank you in advance for choosing TravelShop Turkey!

Highlights
Included
Not Included
Know Before You Go

PLEASE REMEMBER: Turkey is a very modern Islamic country and, overall, you can dress and behave as you would in any other country in Europe. There are just a few things to be aware of, for example, you cannot enter a mosque with alcoholic beverages and women must cover their hair if they wish to enter a mosque and wear modest clothing. Bars, cafes and restaurants are open until late at night and are safe to enjoy as long as you take the normal precautions, for example, don't leave your drinks unattended, use common sense, etc. WE RECOMMEND THAT YOU ARRANGE AND BRING THE FOLLOWING: 1- Travel Insurance that covers health as well as everything else. Globally recognised credit cards. 2- Cash in Turkish Lira for small purchases where cards are not accepted. It is best to use an official exchange office for Turkish currency transactions. 3- Clothing appropriate for the season in which you will be travelling. Keep in mind that Cappadocia is much colder than Istanbul, especially in winter. Remember that women will need to bring a scarf to cover their hair when entering mosques. 4- Camera. 5- Universal adaptor and charger for electronic devices. 6- Comfortable trekking shoes for walking around. 7- International Telephone Communication checked. 8- Have a copy of your flight ticket with you. 9- Carry personal identification with you at all times. THINGS TO CHECK BEFORE THE TOUR: 1- International flight tickets. 2- Tour itinerary. 3- Confirmation from us including hotel reservations etc. 4- Domestic flight tickets, if any. Please check that all details, including your title and name, are spelled correctly. 5- Check that your passport is valid for at least the minimum number of months required by Turkey and any other countries you are visiting. 6- Visa, if required. Check that the dates of your visa match the dates you will actually be in Turkey. 7- If you need a visa, please ask us for an invitation letter to assist in the visa application process. 8- Flight details for on-time airport transfer services. 9- Observe the luggage limits set by airlines for domestic flights, if any. 10- Obtain emergency contact details from our office. 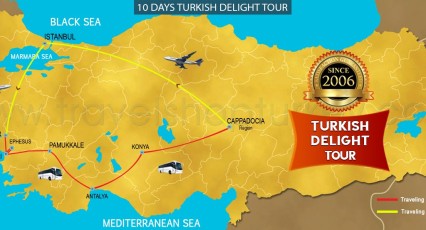 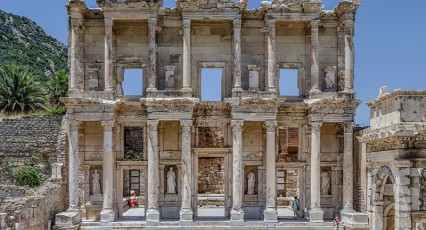 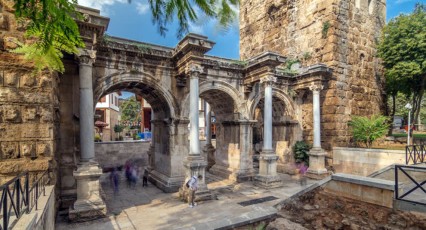 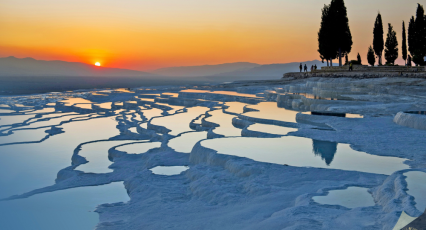