On the Bosphorus shore of Istanbul, we want to introduce you to two sites where greens and blues meet at marvelous palaces and gardens. 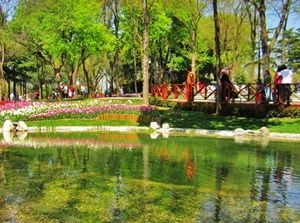 You can see every tone of green at Yıldız Grove on the slopes between Beşiktaş and Ortaköy. These groves can be defined as the oxygen store for Beşiktaş, and was one of the most important places for the Ottomans with its tulip gardens. Yıldız Korusu had experienced legendary feasts, but was closed after Abdulhamid was dethroned.

Nowadays, Yıldız Grove serves the public, and with its peace and calmness, it is popular among the inhabitants of Istanbul. With the restoration of the villas remaining loyal to their original forms and centennial trees, it offers a pleasing picnic area to its visitors. Also there are very nice cafes and restaurants within the grove’s grounds.

The Stars of the Yıldız Woods

*Yıldız Palace Clock Tower: This is in the southwest corner of Yıldız Mosque's yard. It was built in 1890 and reveals a synthesis between oriental and neo-gothic design. The three-storied tower was built on a square plan with broken corners, and is covered with a sharp and slivered dome. In the overhang, there are slivered and arched roof windows.

*Tent Pavilion: One of the two historical houses in the Yıldız Groves. It was built in the backyard of Çırağan Palace for daily tours. After the foundation of the Republic, it remained closed for a long time. To day, it is open to the public. 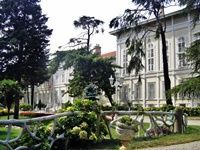 *Malta Pavilion: It built in the Abdulaziz period and boasts a marvelous vantage point. Its restoration remained loyal to its original form. You can see its gorgeous ceiling ornaments while having a pleasant dinner of Turkish tastes. 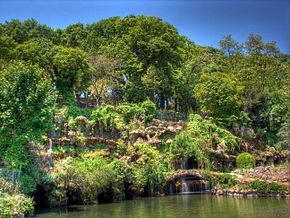 Emirgân Groves is on the northwest slope of the Emirgân district on the European side. In the Byzantine period, this green area was used as a service area. In mid 16th century, it was called “Feridun Bey Garden”. When Murad IV gave the area to Emirgüneoğlu in 1635, it was called the “Emiroglu Garden”. Later the name was changed as “Mirgun” and “Emirgân”

In the second half of the 19th Century, Abdulaziz gave the groves near to Emirgüne village to Hidiv İsmail Pasha. He built three more houses to compliment the wooden palace in the shore. The groves were then given to Saffet Lütfü Tozan, and afterward to the Metropolitan Municipality of Istanbul.

If you would like to enjoy the magnificent seascape of the Bosphorus, you should visit Emirgân Korusu (Emirgan Grove). After peaceful jogging, you will enjoy Istanbul’s beauty at the Sarı (Yellow), Pembe (Pink) and Beyaz (White) Villas.

Cruise on Bosphorus and Black Sea with lunch on boat