You will surely marvel at the imperial magnificence of Ottoman Era on display at Topkapı Palace, the site for the rich lives of the sultans of Ottoman Empire.

When the construction for Topkapı Palace started is still unknown. According to some resources, the foundation dates back to 1460 some says it started right after the conquest of Constantinople. 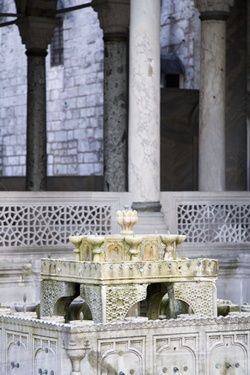 Topkapı Palace was not constructed based on a definite plan, was expanded in time and underwent several changes. This change was due to necessity of adding of new buildings or the reconstruction in place of the original buildings destroyed by fire or other causes.

Apart from the mansions for residence of sultans and harem section, Topkapı Palace also features many structures such as wards for palace guards, a very spacious kitchen for use of palace residents, dormitories for palace servants, Kubbealtı where Divan meetings were held, sacred relics section where belongings of Hz. Mohammed and the caliphs are kept, Gülhane Hospital, Sultan Ahmed the 3rd Library, palace school, treasury office, a stable for the horses of sultan, and St. Irene Church which was used as a weapon storage for some time.

Topkapı Palace was abandoned in the middle of 19th century and lost its significance as the state center. Indeed, part of a railroad was built on the outdoor garden of Topkapı Palace which was is a desolate state in the following years. Recently, in 1924, Topkapı Palace was turned into a museum and opened for exhibition.

Do you already have a pass for Topkapı Palace?

1) Ticket at the Gate

Topkapı Palace admittance tickets cost 30 TRY. The downside is waiting in the lines for quite a long time since it is the most visited museum of Istanbul and attracts millions every year.

If you'd like to visit the palace, as well as Petit Hagia Sophia & Blue Mosque, Istanbul Highlights is the right choice.