The Western Palace of Istanbul: Dolmabahçe

Istanbul situated on seven hills is a city of palaces as well. Istanbul Dolmabahce Palace is the most western and the newest of them all.

Istanbul... The heart of gigantic empires... It has been the residence of emperors and sultans for thousands of years. And ordinary dwellings would not do for them, would they? That’s how Istanbul came to boast so many palaces through the centuries. One of these, the latest, the most “Western”, is the Dolmabahçe Palace.
When the history of a city is so long, the names of its neighborhoods can be very interesting. Each name has either a very old story behind it or a strange etymological basis. That’s why the origins of neighborhood names have always fascinated me. Before going on to the Dolmabahçe Palace, if you don’t mind, let’s first see where its strange name, which means “filled garden”, comes from.
Let’s visualize today’s Dolmabahçe: it is between Kabataş and Besiktaş. Coming from Kabataş, the road curves in front of the Inönü Stadium on your left and the palace on your right as you reach Beşiktaş. Once the place was an extensive cove frequented by ships for shelter. Even the Ottoman navy once anchored there, during the siege of Constantinople. In time, however, due to the alluvium brought by streams and the absence of undersea currents, it gradually filled up and turned into a marsh.
This gulf once extended from the valley between the Gümüşsuyu and Maçka ridges to the location where the Küçük Levent Farm was, which is now a fairground opposite the Şişli Registry Office. From the reign of Sultan Ahmed I (1603-1617) it was filled in various periods. The landfill area was made into the royal gardens and the sultans started spending their holidays in this place, which had become a summer residence. The fact that there was a royal garden on the landfill explains why it is called Dolmabahçe. The building of significant pavilions and villas in the area, however, started during the reign of Sultan Ahmed II (1691-1695) and was continued by of his successors.

Known also as the Beşiktaş Garden in those times, the area saw the building of important structures at various periods. The palace once located there and known as Cağaloğlu Waterside Mansion was demolished in 1680 and a new palace was built the following year. This new building, known as Dolmabahçe Villa or Beşiktaş Palace, started being repaired and extended during the reign of Sultan Ahmed III (1703-1730), at the cost of 2046 pouches of gold. However, it was only after the Patrona Halil Rebellion and the deposition of Ahmed III, during the reign of Sultan Mahmud I, that it could be completed.
Sultan Mahmud I loved the Dolmabahçe area, always spending his summers there. So much so that today there is a shrine in the backyard of the palace for his three wives and daughter. Damaged in the earthquake on May 22, 1766, the Beşiktaş Palace was repaired by Sultan Mustafa III (1750-1774). Sultan Abdulhamid I (1774-1789) had another section of the shore filled up and extended the palace. During the reign of Sultan Selim III (1789-1807), the buildings in the area were again demolished. The Sultan had the architect Melling demolish all the buildings in Dolmabahçe, with the exception of the Tiled Kiosk (Çinili Pavilion), and had a new palace built in the area. Beşiktaş or Dolmabahçe Palace remained in that state until 1815. Unfortunately, in that year the palace was damaged in a fire that started in the furnace room of the harem bath, and was immediately rebuilt by Sultan Mahmud II.
The construction of the Dolmabahçe Palace that stands today, however, was during the era that started by the enthroning of Sultan Abdulmecid in 1839, when the westernization process gained a new momentum. Feeling the need to shape a building in accordance with his requirements, the new sultan chose the Beşiktaş Palace, and had the palace that stands today built.

The palace which was built by Abdulmecid between 1850 – 1856, covered an area of 110,000 m2 and consisted of; the main buildings of the men’s section (Selamlik), Reception Hall for Holidays, the Harem, a Crown Prince Suite, The Suite of the Sultana, Valide Sultan Mosque and the theatre, the royal stables for the horses, the Suite of the Minister of War, The Clock Tower, The Royal Treasury, the interior decoration department, The Birds Pavilion, The Glass Pavilion, Suites of Regular Concubines and Harem Aghas, Hareket Pavilions, Hereke Weaving Room, the suites of Baltacılar, Agavat, Bendegan and Musabihan, and a main kitchen that served the occupants of these suites.
The palace was not used during the long reign of Abdulhamid II and was neglected, and as a result of damage, the theatre, boat yard and the suite of the minister of war disappeared completely. The Royal Stables and the main kitchen were partially damaged and other sections of the palace started being used for other purposes.
The main structure of the palace was designed by Karabet and Nikogos Balyan, major architects of the period, and consists of three sections: Mabeyn-i Humayun (Imperial Men’s Section), Reception Hall for Holidays, and the Imperial Harem. Mabeyn-i Humayun was used for administrative purposes, while the Imperial Harem was the location for the private life of the Sultan and his family. In between the two sections is a Reception Hall where some important state ceremonies were held.

A palace that deserves the word!

One of the most interesting aspects of the palace is that many of the newest technological devices of the time were installed in it. Central heating, electricity and a telephone are some of the luxurious new appointments of the time that were installed in the palace. The palace had a total living area of 45,000 m2, 285 rooms, 46 halls, 6 Turkish baths, 68 restrooms, and 4,454 m2 of valuable carpets covered its floors. The Mabeyn section where the Sultan worked during the day is the most important section of the Dolmabahçe palace in terms of its function and luxuriousness. At the entrance is the Medhal Hall, where visitors were first received, then comes the Crystal Staircase; the Ambassadors Hall where diplomats were entertained and the Red Room where they were received by the Sultan. Both are extravagantly decorated to reflect the splendor of the empire. On the upper floor is the Zulvecheyn Hall that leads to the private suite of the Sultan in the Men’s Section. In this private suite there is a splendid Turkish bath, whose alabaster had been brought from Egypt, besides a study and halls.
The Reception Hall, which is between the Harem and the Men’s Section, has the highest ceiling of the whole palace and is the most impressive. It has a total area that exceeds 2000 m2 and features 56 columns. The dome’s height reaches 36 m, and attached to this dome is a British-made chandelier weighing 4.5 tons. The heating solution for this huge hall is also interesting; the hot air from the furnaces in the cellar was let into the room from the bottom part of the columns. During the traditional ceremony of religious holiday greetings, the golden throne in the Topkapı Palace was also brought here and the sultan used to exchange holiday greeting with leading statesmen.
Of all the interesting buildings of the 19th century, the Dolmabahçe Palace is perhaps the leading one. This colossal sample of the aesthetic approaches of European architecture that prevailed in that period also presents many characteristics of the Ottoman tradition of palace architecture. Despite the Western influence on its details, in terms of both its layout, and the relations of rooms and halls, the palace was designed and built as a structure where the traditional Turkish home was reproduced in huge dimensions.

There is no doubt that the Dolmabahce Palace has significance for the Turkish nation. The fact that Mustafa Kemal Ataturk also used this place as a residence, and spent his last days here when his illness was at its worst, is perhaps the most important reason for us to visit the palace with a special feeling of awe. As a matter of fact, Mustafa Kemal did not like the palace much. Especially during his illness, he felt imprisoned and isolated from his people in the palace, as he disliked the idea of living in palaces. There is even a story that, one night, on the pretext of going to bed early, he escaped from the palace to a Greek restaurant on the Bosphorus!
With the concept of Turkey replacing that of the Ottoman, the reforms carried on by the young nation also aimed at giving the palaces to the whole nation.

You don’t have to be a Sultan! 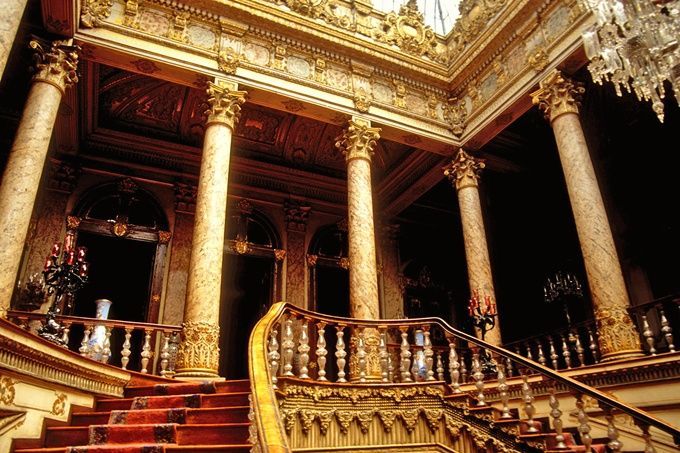 The first attempt to turn the Dolmabahçe Palace into a museum was again Mustafa Kemal’s. The first fine arts museum of Turkey, Istanbul State Museum of Painting and Fine Arts, was opened on September 20, 1927 on the order of Ataturk in the Suite of the Crown Prince in the Dolmabahçe Palace. And today, the palace is a museum that not only statesmen but also the citizens of all countries in the world can explore.

Dolmabahce Palace is only one of the marvelous places of Istanbul. Why not see the palace with your own eyes? Istanbul is only one flight away!

Except for Mondays and Thursdays, you can visit the palace everyday of the week from 09.00 to 16.00. Entrance fee for the tourists is 30try.