It is a state-of-the-art art center in Istanbul, with exhibition galleries on four storeys. In one aspect it resembles black and white sci-fi movie sets; it is as if Frankenstein could jump out of the corner suddenly.

We are walking in the Eyüp Campus of Istanbul Bilgi University through a large, even huge, garden. It’s windy and chilly outside. The destination we are directed to, passing by the So Café on the right, was once a power plant, Santralistanbul. As we advance, at first a great opening and a high and wide wall welcome us on the left. As we turn the corner, a huge brown iron smoke shaft - which is taller than the building it protrudes from - enters into our view. On the left of the smoke shaft and high off the ground there are arc-topped windows in rows. It resembles something from Soviet Russia; huge, industrial, yet silent and abruptly intimate. Those who have seen the movie Eraserhead by David Lynch would understand the ambiance I am trying to express. But do not abandon yourselves to despair, this place is more luminous, calm and its inside is much less intimidating. 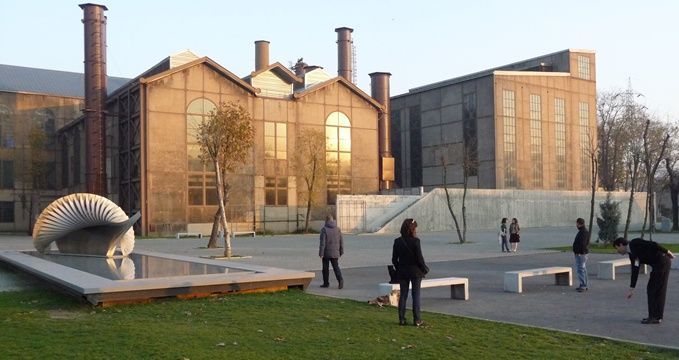 This building is in fact an old coal-operated thermal power plant, a relic from the Ottoman Empire. In the time when it was operational, it was called “Silahtarağa Power Plant”. The construction started in 1910 when the Hungarian Ganz Co. obtained the contract, and is located on the estuaries of Kağıthane and Alibeyköy brooks. It met all the electricity demands of Istanbul from 1914, the year it had went into service, until 1952. First it started to provide electricity for the tramcars and the European side of the city in 1914. In 1926 to the places between Arnavutköy and Vaniköy, and it started to illuminate the Anatolian side via the cables laid under the sea. It continued to serve until 1983, although the productive capacity declined since 1956. 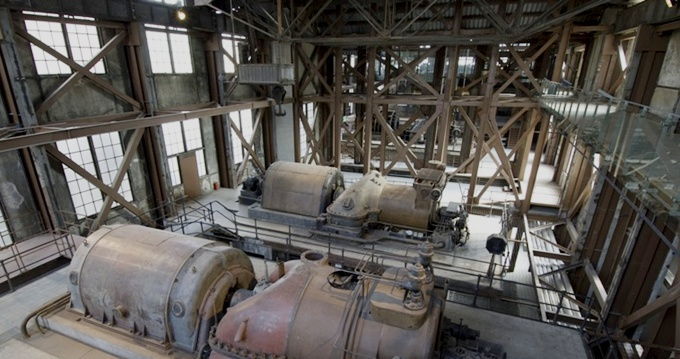 After it was closed in 1983, Silahtarağa stayed idle until 2004. In 2004, this plant - built over an area of 118 thousand square meters - was consigned to Istanbul Bilgi University by the Ministry of Energy and Natural Resources. The University has succeeded in transforming this facility. It was a magnificent example of technology in the times it was built, and the modern re-imagining is truthful to the original. The transformation process finished in September 2007, and is now been made into an arts and education center under the name Santralistanbul.

What kind of a place is santralistanbul?

Santralistanbul is a multipurpose center. When you enter the gate, you will see the Museum of Energy on the right and on the left the Modern Arts Center comprising exhibition galleries over four storeys. The building of approximately seven thousand square meters was engineered maintaining the old forms of the two boiler buildings. These had been demolished after the decommissioning of Silahtarağa power plant. It recently hosted the ‘Modern and Beyond’ exhibition displaying dozens of artists from İlhan Koman to Abidin Dino, and Bedri Rahmi Eyüboğlu to Fikret Mualla Saygı. The Santraldükkan, where the publications and products related to the culture and arts activities in Santralistanbul as well as various souvenirs prepared specially by designers are sold, is located at the ground floor of the center. Santralistanbul has also an “international residence program” aiming at transforming Istanbul to a platform where various cultures and traditions, innovative thoughts and studies can convene. To this aim, the company offices of Silahtarağa Power Plant were transformed into residences where leading artists, architects, philosophers and scientists could be accommodated. In addition to all of these innovations, this place is also a university campus. The departments and their related postgraduate programs under the umbrella of Istanbul Bilgi University’s Faculty of Arts and Sciences and the Faculty of Communication have been conducting their lectures in Santralistanbul since the 2007-2008 academic year.

The Museum of Energy is probably the most interesting section of santralistanbul. This unique museum, where you can see the industrial effects on Europe created by the industrialization from the early in the 20th century, is comprised of two main sections. These sections are the Exhibition Gallery and Energy Game Area

The first section is the time-bound exhibition gallery and energy game area. In this game area, there are twenty scientific ‘games’ where visitors may produce their own electric energy, or where they may be batteries themselves, or build magnetic sculptures and touch thousands of volts electricity. The first thing that greeted us when we entered the museum was a large plasma sphere with blue electric bolts circulating inside, glowing in the consciously darkened ambiance of the museum. One of those, when you put your hand on it, produced an arc of electricity that flowed through the electrode in the center. When we were finished playing with the plasma sphere, and when we raised our heads and looked around, we noticed that this place is like heaven for boys. I said boys but don’t misunderstand; it is a rare museum for the girls also who love electric experiments, dark corners, and the places which resemble old, fantastic horror movies. Dr. Frankenstein? Are you there?

There are such amusing and interesting electric shows that one cannot control himself inside the museum. Each game is organized on a bench and anyone can play the game or perform the experiment by pushing a button or turning the levers and pedals on the bench. An experiment where you can watch the electricity flow between electrodes; a bulb that produces the electricity it consumes, pedaling like a bicycle; or another game where you can operate a small T.V. set, a mixer, a drill and a hairdryer; a self-moving case that resists you and the gravity via a rapidly spinning disk inside and lots of other fascinating experiments. For instance, while we were there, a group of students were running excitedly from one experiment to another.   To operate some of the experiments one needs help from the attendants. The attendants of Santralistanbul are debonair and ready-to-help visitors.  On the same floor, you may visit the Workshop Room where, with the participation of kids, scientific experiments are performed. Transformed from the Bara Room where once the switches and cables to supply the city with electricity could be found, Workshop Number 4 melds arts and science. The Cinema and Seminar Theatre is located here, and movies about the fusion of arts and science are shown and seminars about the same topic are given.

The second floor is a familiar place for people who are acquainted with the power plants equipped with the technology of the first period of the 20th century. But a place like this one, for first-timers, is magnificent.   Four big generators of Siemens, Brown Boveri, AEG and Thomson-Houston brands, girded with rare iron fences, the steam turbines belonging to each generator: each aspect amazes you instantly. The valves, pipes, control panels, large, round and glassy needle gauges of the steam turbines... the walls, steel-construction beams supporting the ceiling, the cranes that once operated at the top of the fifteen meter-high ceiling, crooks dangling from the cranes...

As we are walking among the turbines and gauges in admiration, the glassed-in floor above us draws our attention. We are amazed as soon as we climb up the stairs. This is the monitor room of the plant. The room where the electricity produced below was distributed to Istanbul and the distribution was monitored. The first thing that catches your eye is the large semi-circle control desk in the middle of the room where once electricity was delivered to the districts of Istanbul. Another control desk lying lengthways in the front of the room is like a control panel from a space station used for putting a satellite into its orbit. It is filled with buttons, breakers, levels, and analogue needle gauges.   For approximately seventy years, the engineers and technicians have controlled the electricity that supplied Istanbul by pushing the buttons and toggling the breakers. This facility, which is one of the first examples of the industrial past of Istanbul and the Ottoman Empire, should be seen. It is open between 10:00 am and 10:00 pm except for Mondays without an entrance fee, in the morning. The experiments should be tried, the touch screen info-kiosks should be read to the end, and photos should be taken. At noon, after having your lunch at So Café, one should sit on a bench in the large garden of the campus and chat with friends. Later one should re-enter santralistanbul, this time turning to the left, going to the Modern Arts Center- which is free of charge, like the Museum of Energy. The exhibition areas comprised of dozens of galleries on the four floors should be visited one by one, and modern or classic, and all of the objects of art should be adored. In the evening you may leave Santralistanbul tired but satisfied.

Why not check out some other museums of Istanbul?