The Blue Mosque is yet another one of Istanbul’s most important symbols, forming a magnificent piece of the Historical Peninsula’s skyline...

The Blue Mosque, one of Istanbul’s most prominent symbols, immediately astounds every visitor to the city. It is located directly opposite the Hagia Sophia Museum. The mosque takes its name from Sultanahmet Square, and is the most important of the mosques to be built as an endowment to the city during the Ottoman Empire.

Sultanahmet mosque was commissioned by Sultan Ahmet I, and built between 1609 and 1616. Its English name, the “Blue Mosque”, stems from the more than twenty thousand blue Iznik tiles that decorate the interior of the structure.

The Blue Mosque is the most typical example of Classic Turkish-Ottoman architecture, and was the first mosque that included six minarets in its original design. Although the Blue Mosque was not designed by the legendary Ottoman architect Mimar Sinan, whose unparalleled works are seen throughout other parts of Istanbul, it bears the stamp of his influence.

According to a rumor, the mosque’s architect, Mimar Sedefkâr Mehmet Aga—himself one of Mimar Sinan’s students—expanded on a plan that had earlier been expounded by his master in order to build the mosque. 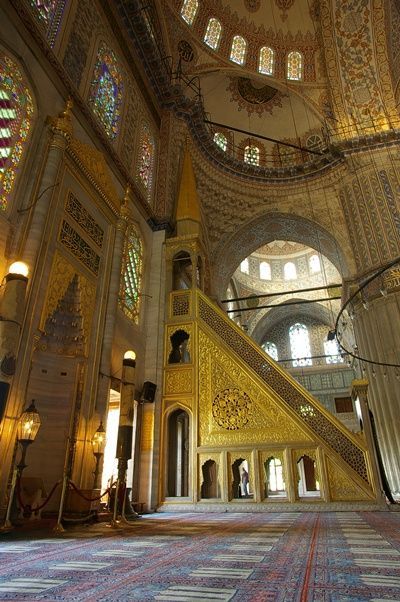 Anyone who enters the three inner doors of the mosque itself immediately encounters the paint, tiles, and stained-glassed decorations that complete the structure’s glorious external appearance.

The interior of the mosque is surrounded on three sides by balconies, while carpets cover the floor, as in all mosques. Even on its most crowded days, one can see men praying directly across from the main entrance of the mosque.

Near them, one sees the mihrap (a prayer niche pointing in the direction of Mecca) and, next to it, a marble bench, which is one of the finest examples of Ottoman stone carving. The spiral staircases in the mosque make it quite easy to reach the minaret balconies.

Although the dome is a crucial element to all Ottoman mosques, that of the Blue Mosque exceeds most in splendor. Like many other mosques, the Blue Mosque also includes a complex that houses a variety of social and cultural institutions. Among other things, this complex is home to a covered market, a Turkish bathhouse, a soup kitchen, a hospital, several schools, a caravansary, and the tomb of Sultan Ahmed.

Between the months of May and September, a variety of different events and exhibitions are typically organized at the Blue Mosque. Examples of these programs include the story of the mosque’s construction, information concerning its architectural details, speeches dedicated to Sultan Ahmet the First’s Grand Vizier and head architect of the mosque, Sedefkâr Mehmet Aga, and presentations on Ottoman and Turkish history. These programs are presented in Turkish, English, French, and German, and are accompanied by national and religious orchestral music.

With its magnificent dome and Iznik tiles, the Blue Mosque is one of the most important masterpieces of Ottoman imperial architecture. 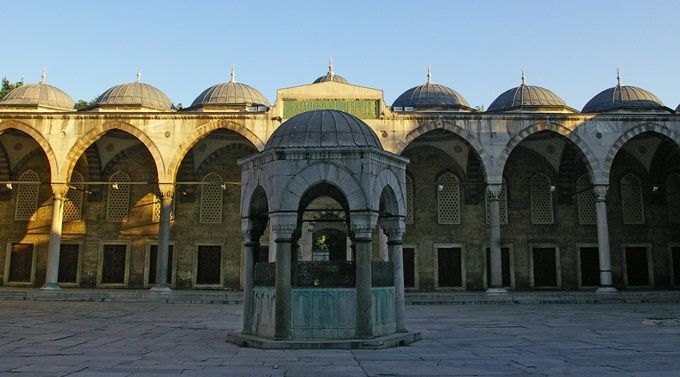