St. Antoine Church, situated on Istiklal Street, is a silent and tranquil shelter where people from everywhere in Istanbul make wishes and light candles. 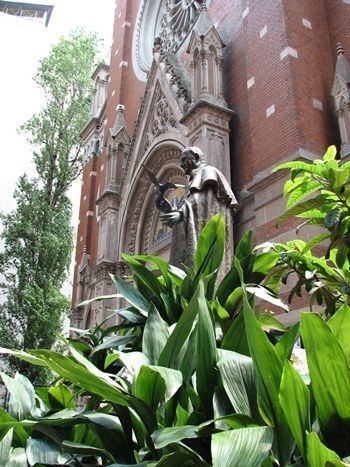 St. Antoine Church is located on the left as you head towards Tunel from Galatasaray. The building is a creation by Giulio Mongeri. The church was located in Azapkapı before, built by monks of the Franciscan order.

A wooden church was destroyed in a fire in 1699. In 1762 the Catholic Franciscan Church was built on the land of the French Embassy but it was demolished because it blocked the path of a tram.

St. Antoine Church and its premises were then rebuilt in 1912on the area where the “Concordia Theater an Garde” had existed.

The Catholic Church has the largest Christian community in Istanbul and the believers of every kind of religion visit it frequently.

Although the name of the church is “Saint Antoine” in French, it is also called “St. Antoine” since Italian priests administer it.