After the end of the invasion, Istanbul entered a new era with the declaration of the republic.

Istanbul, which was a capital to three great empires, left this title to Ankara. The population, which was around 850 thousand at the turn of the century, decreased to 700 thousand in the population census of 1927 with the turn towards Republican Period.

While the efforts for westernization were shifted to Ankara in cultural, political, economical, architectural and ideological respects, Istanbul was seriously neglected. And Istanbul, in its history of over two thousand years, started to be governed from the outside for the first time. Much less resources than it produced were allocated to the city, which continued to be the economical and commercial center.

In this period, no work was done with regards to urban planning. There were only changes which reflected the ideology of the fresh state; changing of the street names, allocation of buildings of Ottoman dynasty and empire for new functions, St.Sophia’s turning into a museum, imperial organizations being opened to service with new names and purposes were mere symbolic activities during the period.

The first moves regarding Istanbul’s urban planning started when Adnan Menderes, leader of the Democratic Party, was in power. Social movements starting after the 1950s and a population explosion resulted in frantic architectural growth in Istanbul. The modern city image devised by Democratic Party executives added to the development. The roads, which were launched to service in spite of the destruction of the historical city, changed the fabric of the city.

Between 1950 and 1960, many main highways were opened to public service and already active ones were expanded. When those roads were being opened to public service, thousands of buildings were demolished. Many historical sites were damaged. Many works of art were either transferred or destroyed. Also in this period major buildings were constructed which reflect the change in city’s architectural canvas such as the Municipality, Hilton Hotel and Divan Hotel.

Between the years 1950 – 1960, Istanbul did not undergo any notable urban planning. This did not occur until the 1970s, after the urbanization works in Democratic Party period were long entrenched.

In 1973, Bosphorus Bridge was opened to service. The Bosphorus Bridge, with its surrounding approach ways, caused the emergence of new settlements and new fields of profitability in the neighborhoods of the metropolis.

After the 1980s, a second settlement plan was put into action, though it was not as comprehensive as the first. The clearance of industrial institutions from The Golden Horn, the opening of Fatih Sultan Mehmed Bridge in 1988 as the second bridge over Boshporus, Tarlabaşı Boulevard, piled road in European side of Bosphorus, the coast between Kadıköy and Bostancı’s being filled and turned into a highway, express tram, and a metro project between Taksim-Levent were the major works in this plan. Also in those years, the migration to Istanbul increasingly gained speed. The city was surrounded by shanty towns and cheap cooperative houses. 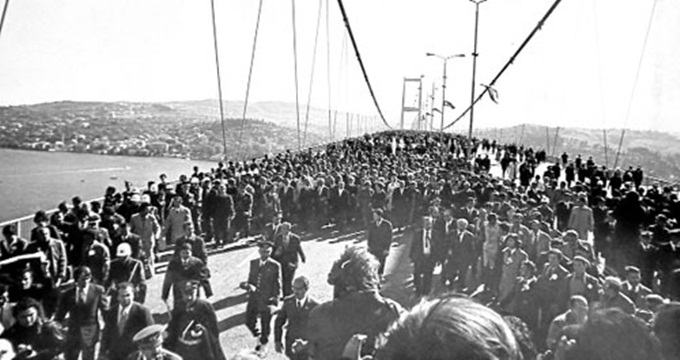 The 1980s saw industrial institutions moved out of the city. Thanks to the popularization of the natural gas network and meticulous controls in coal consumption, residents of Istanbul lived a winter of tranquility regarding air pollution. Also, the water supply problem, one of the most troubling issues of the city, was handled for the most part as a result of the employment of new facilities of water supply and new investments on water softening and its distribution.