Nearby Istanbul, Garipçe Village and Rumelifeneri have managed to preserve their purity and texture.

These two villages resemble the Eastern Black Sea coastal villages, with their fresh air, tranquility and peaceful nature. At the northern part of Istanbul, where the Bosphorus broadens and hugs the sea, on the spot that the land ends and the sea begins; a place that never lacks northeast winds and cold in the winter, and the sultry summers do not trouble, there are two villages, very green and very blue: Rumelifeneri and Garipçe Village. We recommend them to those who have not visited yet. In Istanbul, every trip of a long distance is an adventure, and to take the step to start this adventure is always a rocky road, especially when one is meant to set off not for necessity but for an excursion. We set off for Rumelifeneri in a hot and sultry Istanbul day. Very soon, we will cheer up with the fresh air, full of oxygen and iodine. But, first we are going to stop in Garipçe Village.

Garipçe Village is our first stop 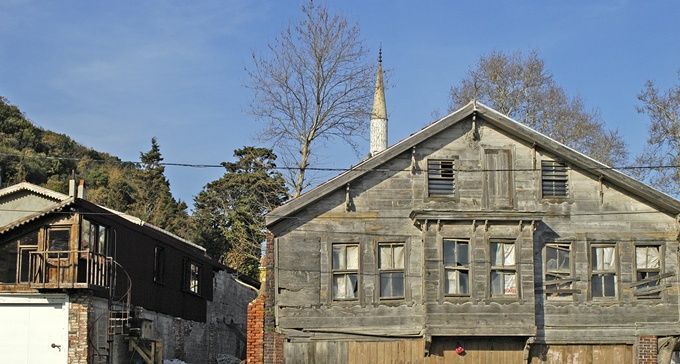 After passing Sarıyer, on a well-asphalted road with lots of bends, we come across with Garipçe Village turnout. The village, that approximately has 70 or 80 houses, now lies below us. Half-timbered Black Sea houses run down both slopes. In older times, when there was no road and you could reach Sarıyer only by the sea, village life was very disconnected from the outer world. The name of the village ‘garip’ (poor, miserable) comes from this isolated life the village had lived for a long time. However, today it is very easy to reach the village by your car or the bus that comes by every 35 minutes. Garipçe Village, with its residents almost entirely from the Black Sea region, has managed to preserve its nature and ambiance. One reason for this situation is that the village is a protected area. You have to get permission even to repair your roof, let alone build a new house. Immediately on the left, stands the 500 years old Genoese castle. The castle still survives with its arched walls, stepped cuttings and cellars, although it looks uncared for and messy due to treasure seekers. The castle has a seascape panorama, and it is planned to be converted to an underwater museum in the future.

The center of the village, resembling a traditional village circle, stands right on the shore. Here, we call in on the Garipçe Aydın Fish Restaurant run by Ali Oğuz. The place, in which businessmen, authors, many researchers from academia have become regulars, is a family restaurant that does not serve alcohol. They offer daily fish choices that they catch in their own boats. In the summer there are usually pilchards, scorpion fish, horse mackerel and striped red mullet. In the winter there is red mullet, turbot, bluefish, bonito, large bonito and anchovy. The place is famous for its fish soups and anchovy with thyme. On the weekends there is also brunch service. For ‘mıhlama’ the ‘kolot cheese’ that comes from Trabzon, and with ‘çökelek’ (curd) and ‘acuka’ (walnut paste) produced in the village, a complete Black Sea breakfast is prepared. Another famous restaurant in Garipçe village is the Asma Altı Restaurant. This restaurant, with its garden beneath the vines where the Istanbulites come to have breakfast - especially in the summer- welcomes its guests indoors in the winter, in a house in which there is a 135 year-old baker’s oven. This restaurant, that forms its fish menu according to the season, is known for its breakfast service. The Asma Altı Restaurant offers an excellent breakfast with its countless choices including pear marmalade of Kastamonu, rose hip marmalade of Tokat, thyme honey from Datça, acuka, cornbread and ‘mıhlama’. We leave behind Garipçe Village, noting that we should absolutely have breakfast here on a weekend.

The first village of the Rumeli bank: Rumelifeneri Village 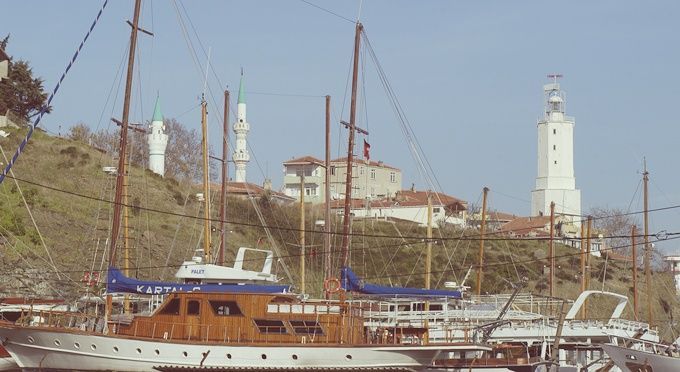 Rumelifeneri village, that greets the vessels entering the Bosporus from the Black Sea, resembles the charming Black Sea village where fishing boats line up. The lighthouse, which was founded by the French in 1856 and has given its name to the village, is one of the two symbols of the village, together with the castle of Rumelifeneri. Right at the bottom of the tower of the lighthouse, that guides the vessels passing through the Black Sea with its visibility range stretching to 18 miles, there is Saltuk Baba Tomb that can still be visited today. The castle of Rumelifeneri is a spot where the by-passers breathe in the sea-smelling wind from the Black Sea, while enjoying the panorama. In Rumelifeneri village construction activities are banned in order to prevent over-settlement. Once a Greek village, Rumelifeneri village is a place where mostly people from the Black Sea Region have gathered, just like Garipçe village. We look for the old Greek houses but most of them were destroyed. On the slopes of the bays, a few kilometers out of town, construction sites of summerhouse complexes draw attention.

The most famous restaurant of Rumelifeneri is the Roke Restaurant right on the breakwaters in the harbor. The Roke Restaurant, run by Seyhan Karan, takes its name from the ‘roke’ rocks at the harbour. Roke Restaurant is almost 20 years old and you can sit in its garden in the summer. They buy daily fish from the boats docking at the harbor. This family enterprise, run only by women, has been serving its regulars for years. For those who want to visit Rumelifeneri village and spend a few days there, there is no accommodation alternative other than Golden Beach Club. Situated a few kilometers from the center, The Golden Beach Club is in Marmaracık Bay on 220 acres of land. It’s a good alternative, with its own bay and beach, for those who want to swim without going too far from Istanbul. Also, for those who want some action, there are ATV tours to the lake 10 kilometers away, safari tours, bicycle and canoe alternatives. In Golden Beach Club, you can stay at the boutique hotel as well as in the cute bungalows scattered across the slope behind the beach. Bungalows in the winter welcome their guests who want to get away from Istanbul and to find peace in the forest by the sea and enjoy the warmth of the chestnuts on the stove. After a foamy, wildly windy and joyful day, we leave behind Rumelifeneri Village. While finishing the day in which we ate fish with the smell of iodine, had joyous chats, roamed but felt no tiredness, we stopped by the road to Sarıyer and snacked on some blackberries; and we had our photos taken facing the beautiful panorama looking down to the entrance of the Bosporus. And then we set off to be a part of the chaotic life in the city. But we know that our paths will cross here when we wish to get away from the chaos of Istanbul to live in solitude, tranquility and nature.

Garipçe Village and Rumeli Feneri are lovely choices for a weekend, but make sure to check the events taking place in Istanbul this weekend before making plans!