A small, modern and pioneer work of art in Istanbul: Şakirin Mosque...

This small and aesthetically pleasing mosque marks the beginning of a new era in Turkey in terms of mosque design and architecture. It has been the cause of surprise and debate, with people intrigued with its features, from its dome to fountain.

Şakirin Mosque, which was finished in four and a half years on the Asian side of Istanbul in a corner of Karacaahmet Cemetery, attracted the attention of foreign media during its building. Afterwards it caused a minor sensation with its opening ceremony in May.

The mosque was built in memory of charitable Semiha Şakir and her Saudi husband İbrahim Şakir by their children Gazi, Ghassan and Gade Şakir, was designed by Hüsrev Tayla. However, architect Tayla has left the mosque’s construction before its completion and transferred its conclusion to his student. Zeynep Fadıllıoğlu has implemented the interior decoration and design of Şakirin mosque, which has indoor and outdoor parking, 10 thousand square meters of built area and a square plan with a capacity for 500 people.

Zeynep Fadıllıoğlu is as famous around the world as she is in Turkey. She asserts that their purpose was to adorn classical architecture with modern lines when they set forth. But not all of what you see inside belongs to her. The family has worked with many artists and craftsmen to create this piece of modern splendor. It is a necessity for the artists to work together in harmony to create this beautiful work of art. As is understood, there was a great pressure on designer Fadıllıoğlu. Furthermore, if we remind ourselves that she has the title of the first woman that makes the interior designs of a mosque, it is apparent that she had a great deal of work.

It is said that construction of the mosque took four and a half years, and harbors interesting details in many aspects. The exterior of the mosque welcomes you at first, for which Turkish and foreign artists have worked together. Between the centenary cypresses in Karacaahmet cemetery, the first two minarets are seen standing alone near the dome. There is no minaret balcony, as the azan is projected by loudspeaker. The mosque is seen quite simple from the outside, and its dome is covered with aluminum composite panels in the form of fish scale, in a style that called “shell dome”. The design, which wraps the dome in a blue image at night with ultramodern light effects, is an effect by English artist Arnold Chan.

However, people who are interested in architecture will immediately recognize that the exterior of the mosque is quite similar Ankara Kocatepe Mosque, designed by one of our famous architects Vedat Dalokay. Interestingly enough, the project of Vedat Dalokay was rejected, as it was claimed that shell dome would not endure the years. Hüsrev Tayla’s classical mosque project was accepted instead. Now, the mosque that stands in front of us in Üsküdar is Hüsrev Tayla’s mosque with a shell dome.

When you leave the irony of history on one side and go towards the mosque, you will see that grey stones dominate. Dark grey Kayseri stones were used in the construction of the mosque. The exterior was put together by architect and painter Kadir Akorak.

A ramp and easy-to-climb stairs brings us to inner court. The little pool that welcomes you immediately functions as the fountain. A sphere that symbolizes the cosmos is placed in its center. Wherever you look in the small sphere, you see the image of mosque and minarets. The sphere was designed as a transparent dome by London’s famous sculptor William Pye. 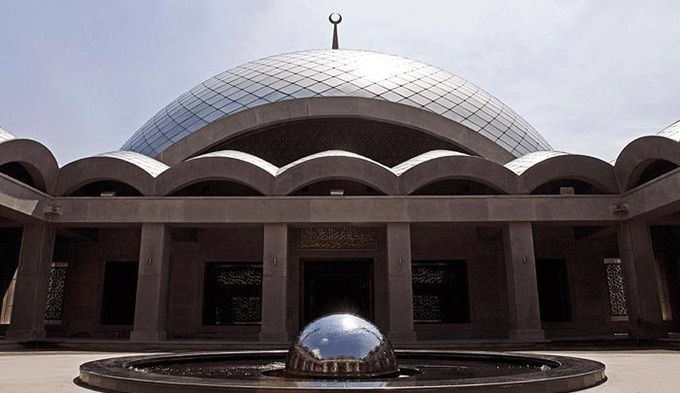 It is time to enter the mosque now. The mosque’s exterior is quite plain, apart from the shell dome. Even the narthex is exceedingly simple.

But the real surprise is the interior. When you step into the mosque, a turquoise bright yellow altar welcomes you. It is such a beautiful welcome that you need to take your time to absorb its beauty. The altar creates the impression of an amulet. The pulpit placed near the altar is cultured in lighter yellow and if you look from a distance it appears to be inscribed with calligraphy. But no: When you get closer to the 12-stage pulpit ornamental leaf patterns are revealed. The leaves were designed to represent the cosmos by Tayfun Erdoğmuş, who is the Head of Faculty of Fine Arts at Marmara University. The altar is so enchanting that you barely notice the camel hair, hand-knotted carpet on the floor. The places to perform prayers are defined with burgundy lines on the carpet.

A master designed each special feature of the mosque. For example, the chandelier that covers the interior walls of the mosque with plexiglass, metal, mirrors and glass bears three artists’ signature.

Stained glass master Orhan Koçan built the plexiglass and metals, Nahide Büyükkaymakçı made the crystal and the chandelier was envisaged in the shape of big nested circles. The chandelier consists of three rings and features God’s 99 names, and was designed by Nur Sûre. The prayers were made by famous calligrapher Hüseyin Kutlu. But neither the nested circles, nor the size of chandelier, are the enchantment in the chandelier. The most impressive aspect is the crystal drops that give the impression of water flowing down gently from the corner of the circle. The thought that lies behind this is elegant: It gives the impression of rain (God’s compassion) on the prayers.

Şakirin mosque is covered with glass on three sides. Contrary to conventional mosque designs and also other places of worship, it is luminous. This bright design makes the exterior and interior seem the same. You can see outside from inside easily but it is hard to see inside from outside due to the original design of grates on the windows. These panes have plenty of other interesting features. Every casement is stylized like the Quran’s pages. When you look from a distance it is as though it has been written on white pages with gold foil. It is as if you are inside the holy book and in this atmosphere, the book comes to help you in everything you hope, wish for and are grateful for.

The Dome is important in mosque architecture, both from the exterior and interior. We saw the difference of the half shell dome from the outside. We see that the main dome is ground color and is inspired by the colours of Tophane. Red is dominant on the walls that frame the window.

The center of the dome, designed by Semih İrteş and based on Topkapı Palace’s Tophane pattern, is enclosed with Fatır Sûre, which is then circled with Mülk Sûre by calligrapher Hüseyin Kutlu. The figures in the line spaces are by famous artist Orhan Koçan’s. The corners were decorated with these names’ boards: God, Mohammad, Hz. Ebubekir, Hz. Ömer, Hz. Osman, Hz. Ali, Hasan and Hüseyin.

Engraver Semih İrteş suggests that there must be an idea and opinion underpinning every significant structure, and insisted that an idea be established here before the project even started. Stringcourse writing in the dome attaches cinctures together and forms the shape of a pinwheel. With this pinwheel he says that they tried to explain the rotation of the world and planets. All of the calligraphy in the mosque was made of 23-carat gold foil and took two years to make. It is significant that the Şakirin brothers have chosen all the prayers in the mosque. 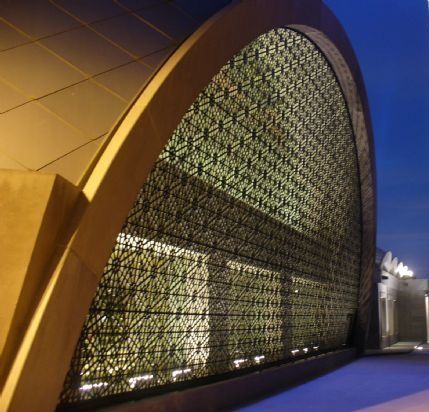 The mosque pays attention to hygiene. The separate men’s and women’s toilet facilities are of the same standard one sees in five star hotels. A private company will do the cleaning and security guards will protect the mosque. Additionally, an educational display, air-conditioning and heating system, projector and sound scheme are included in the plan.

Outside, in the museum section, four pieces of Ka’bah blanket are on display. They were purchased from auction house Sotheby’s at great expense. There are also collections of İznik pottery and inheritanced Turkish Islamic arts.

It is certain that Şakirin Mosque is Turkey’s –if not the world’s - most modern mosque. Dorian Jones from the BBC described this mosque as “The most radical mosque designs of Turkey that continues for generations”.

All over the world, some works of art are remembered because of their architect, some identified with their owner, or made noteworthy because of their location, and some because of their original design. For example, most of us do not know who built the Divriği Ulu mosque. The Taj Mahal is identified with Shah Cihan rather than with its architect. AKM (Atatürk Cultural Center) is connected to the function it serves. For now, the Şakirin Mosque is most clearly linked with Zeynep Fadıllıoğlu’s name. But let’s leave the judgment to history’s slow and cruel cogwheels here, and go towards the exit door.

Especially over the last 50-60 years Turkey has a history of building imitation mosques of variable quality. Today, everybody hopes that the Şakirin Mosque will increase the number of mosques with an aesthetic design.