Day 1 - Istanbul - Arrival Day – Friday
Upon your arrival in Istanbul, you will be met at the airport and transferred to your hotel. For the rest of the day, you will be free to explore on your own. In the evening, enjoy a welcome dinner of delicious and authentic Turkish food. Accommodation for the night will be in Istanbul.

Day 2 - Istanbul City Tour – Saturday
After breakfast, your guide will meet you in your hotel lobby at 8:30 am. The first stop of the day will be Topkapi Palace, the residence of the Sultans and their families between the 15th and 19th centuries. The next stop will be the Blue Mosque which is the only mosque with six minarets. Its name comes from the beautiful, blue ceramic tiles that line the interior. Just outside the Blue Mosque is the Hippodrome which was the social and entertainment hub of the city during the Byzantine period. The last stop of the day will be to the Spice Bazaar, or Egyptian Market, where you can browse and breath in the delicious aromas of the spices, teas and fresh produce sold there. In the evening, dinner will be served at an authentic Turkish restaurant. Accommodation for the night will be in Istanbul.

Day 3 - Gallipoli Tour – Sunday
After breakfast, we will head to Gallipoli. The drive takes around 6 hours so you could bring a book, enjoy the scenery or just take a nap! After lunch, we will visit the Gallipoli battlefields where, during World War I, Australian and New Zealand forces (called ANZACs) and other Allied soldiers fought the Turks in an attempt to conquer the coast and make their way to Constantinople (present-day Istanbul). You'll hear about the tragic losses and defeat of the ANZACs and Allied forces and the sacrifices that soldiers on both sides made for their countries. The tour will take us past the Gaba Tepe War Museum, Ariburnu Cemetery, Anzac Cove, the Beach Cemetery, Shrapnel Valley and many memorials. Accommodation for the night will be in Canakkale.

Day 4 - Troy Tour - Pergamon – Kusadasi – Monday
After breakfast, you will meet your guide in your hotel lobby at 8:30 am. The first stop of the day will be the ruins of the ancient city of Troy where the Trojan War between the Greeks and Trojans took place in 1250 BC. Troy was a very important settlement in the Bronze Age and there are lots of ruins to explore, plus a replica of the Trojan horse to see. Next, we will drive to Pergamon and have lunch. After lunch, we will visit the ancient city of Pergamon which was once the great capital of Asia Minor. At that time, it was the centre of culture and health in the region. Finally, we will make a short stop at a jewellery centre before continuing on to Kusadasi. Accommodation for the night will be in Kusadasi.

Day 5 - Kusadasi - Ephesus Tour - Turkish Village Sirince – Tuesday
After breakfast, you will meet your guide in your hotel lobby at 8:30 am. The first stop of the day will be the ruins of the ancient city of Ephesus, one of the great cities of the ancient world. In Ephesus, you'll see the Temple of the Artemis, one of the Seven Wonders of the Ancient World, the great Celcus Library and Roman baths. When we've finished exploring, we will see a Turkish arts and handicraft demonstration. The next stop will be Sirince Village which is famous for its vineyards. We'll get to try a variety of their famous fruit wines. Our final stop will be to a leather workshop and then we'll head back to your accommodation in Kusadasi.

Day 6 - Kusadasi - Pamukkale Tour – Wednesday
After breakfast, we will head to Pamukkale. After check-in and a lunch break at the hotel, we will visit the Ancient City of Hierapolis which was once the most important religious centre of the ancient world. Then we'll head to Pamukkale and see the beautiful, thermal water terraces called travertines. Your accommodation for the night will be in Pamukkale.

Day 7 - Pamukkale to Antalya – Thursday
After breakfast, we will depart for Antalya at 10:00 am. After checking-in to your hotel, you will have the rest of the day free to explore on your own. Accommodation for the night will be in Antalya.

Day 8 - Antalya Old City Tour and Waterfalls – Friday
After breakfast, at 8:30 am, we will visit the ancient harbour of Antalya. The Old Town of Antalya is known as "Kaleici" and one of its most famous historical sights is Hadrian’s Gate, built in 130 AD to commemorate Emperor Hadrian’s visit to the city. It is surprisingly well-preserved. You'll also see the Broken Minarets Mosque which has an amazing history. It was first a Roman Temple in the 2nd century, then a church in the 600s, was converted to a mosque during the Seljuk Empire, converted back to a church when the King of Cyprus took the city in 1361, converted yet again to a mosque under the Ottomans and then was tragically destroyed by fire in 1846. Today, the building is in ruins and all that remains is one broken minaret. What a history! After lunch, we will see the Duden Waterfalls, a beautiful natural wonder, and take time to relax by its calming waters. Accommodation for the night will be in Antalya.

Day 9 - Antalya to Istanbul - End of Tour – Saturday
After breakfast, you will be driven to Antalya Airport for your flight back to Istanbul. We hope you'll have a fantastic trip and thank you in advance for choosing TravelShop Turkey! 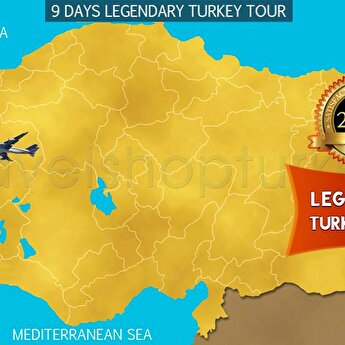 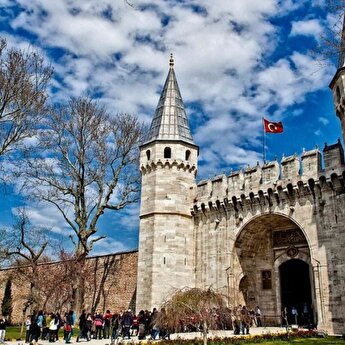 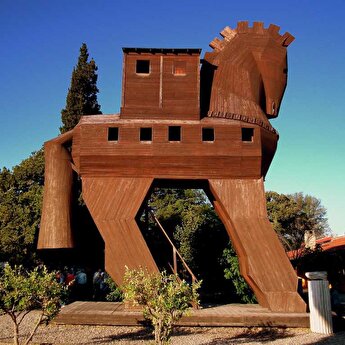 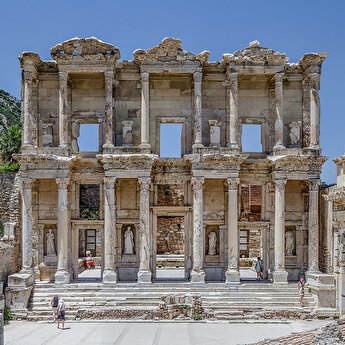 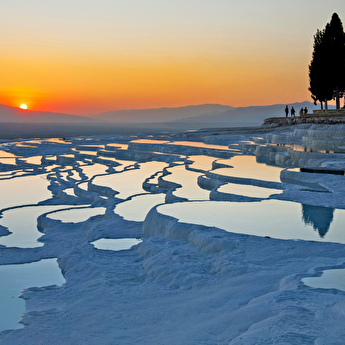 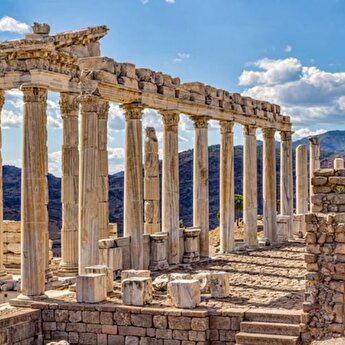